State funding for Georgia’s public schools went up $1.5 billion from fiscal year 2014 to 2017 and is set to go up $515 million if the General Assembly approves Gov. Nathan Deal’s 2018 budget. These are big numbers. Still, many school districts continue to feel the strain of financial pressures. The reason schools struggle financially even as budget rise is simple: If the 2018 budget passes, more than 40 percent of the money added for K-12 students over these years will have helped fill the $1 billion hole in districts’ budgets caused by deep austerity cuts and a quarter to keep pace with student enrollment growth and routine teacher salary adjustments. About 16 percent will have been used to meet rising retirement costs and 8 percent for teacher pay raises. 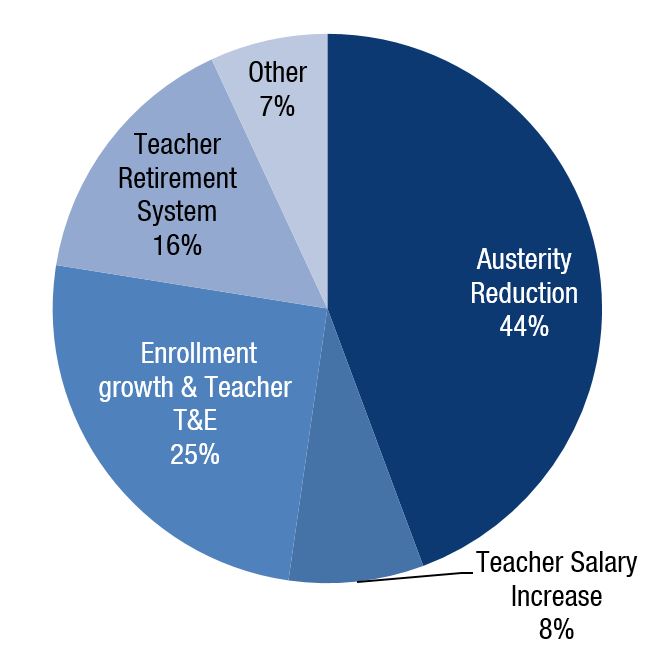 Georgia’s funding formula for K-12 schools determines the amount of money the state is supposed to provide to each district annually. The General Assembly did not provide the full amount of funding calculated by the formula to districts since 2003. The gap between the amount the formula calls for and what the Legislature appropriates is what is known as the austerity cut. The size of the cut varied over the years, topping out from 2010 through 2014 when it reached $1 billion each year. School district administrators coped with these cuts by lopping days off the school calendar, reducing teacher and staff salaries through furloughs, eliminating teaching positions, cutting student classes in art, music and other enrichment programs.

In the state budgets from 2015 to 2017, legislators added $894 million to education funding to reduce the austerity cut and fill the hole in school system budgets. This is 44 percent of the projected $2 billion increase in state funding from fiscal years 2014 to 2018.

This is significant progress but school districts are still saddled with an austerity cut of $166 million this year and that will be true again next year if the Legislature approves the governor’s proposed budget. Even the $166 million figure underestimates the extent that districts are shortchanged because Georgia does not routinely update the formula for inflation.

Georgia’s public schools serve more than 33,000 more students today than in the 2014 fiscal year and they’ll enroll more starting next fall. Schools also need to offer competitive pay to attract and keep teachers. State funding increased $376 million since 2014 to cover the cost of new students and provide routine adjustments to teachers’ salaries based on their experience and graduate degrees. These pay adjustments serve as a default inflation adjustment and are critical as the state’s teacher salary schedule was last updated in the 2009 fiscal year. If the proposed 2018 budget is approved, funding for student enrollment growth and teacher salary adjustments will increase by $133 million. This brings the total increase for these items to $509 million, accounting for 25 percent of the projected increase from 2014 to 2018.

To ensure the Teacher Retirement System remains fiscally sound, the state increased its funding by $133 million from 2014 to 2017. That is set to increase by $180 million in the 2018 budget. The total retirement system increase from 2014 to 2018 then becomes $313 million, or 16 percent of the overall projected increase during that period.

The governor also proposes increasing teacher salaries through the state salary schedule in in the 2018 budget. The price tag for this is $160 million. That is 8 percent of the projected $2 billion increase.

Restoring education funding levels after years of cuts allowed districts to bring back core services and serve new students. The money could go farther if the state didn’t shift some expenses to school districts. As detailed in our 2018 K-12 budget overview, the state eliminated funding for health insurance for bus drivers, custodians and other school employees not certified to teach and shifted the full cost to districts. This drove up school system spending on health insurance for these workers by $400 million since the 2012 fiscal year. It’ll increase about $30 million under the proposed 2018 budget.