About 1.7 million Georgians receive help to put meals on the table through the Supplemental Nutrition Assistance Program, or SNAP. Lawmakers in the U.S. Congress are considering changes to SNAP with the potential to reduce food benefits and increase costs and overhead for states. These threats to SNAP pose a risk of hunger for Georgia families and reduce the economic activity the program generates. In addition, it is important to consider that a drop in food assistance might diminish the health of the state’s population. By helping Georgians meet their nutritional needs and providing a financial boost for working families and local economies, SNAP can be a powerful tool that promotes better health status and access to health care.

Protecting and promoting adequate SNAP benefits for Georgians is a way to support and improve health in the state. Here’s how: 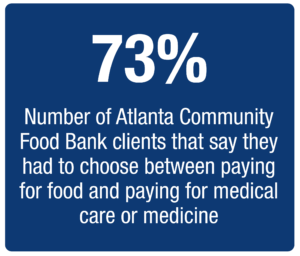 SNAP can help reduce cost-related barriers to receiving health care and healthy foods. Cutting SNAP benefits might make it more difficult for some Georgians to get enough nutritious food to support their health. Less money for food also means less income for other important needs such as medical care. Among SNAP-eligible elderly adults, seniors who get food assistance are 4.8 percentage points less likely to skip taking prescriptions because of cost compared to eligible non-participants, according to a 2018 American Journal of Public Health study. 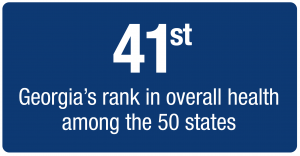 SNAP can support good physical and mental health. People who are not able to get enough food are already less likely to be in excellent or very good health and are more likely to have chronic conditions such as diabetes and heart disease. Reducing Georgia’s high rates of chronic disease remains a public health priority for the state. SNAP can lessen the risk of these conditions, especially for children who access the benefits early. SNAP can also support mental health by reducing chronic stress. The percentage of household heads exhibiting psychological distress after six months of SNAP participation was about 8 percentage points lower than when they entered the program, according to a 2015 American Journal of Public Health study.

SNAP might help reduce health care costs. SNAP participation is associated with $1,400 less in annual health care costs, according to a 2017 national study of low income adults by the American Medical Association. SNAP participation is related to reduced nursing home admissions among low-income elderly adults, according to the BMC Geriatrics research journal. Medicaid pays for 75 percent of nursing home care in Georgia, so better access to food might help to lower state Medicaid costs in the long-run.

About 15 percent of Georgians and 21 percent of Georgia children live in households that are food insecure. These are households that lack access to enough food for a healthy life due to lack of money or other resources to obtain food. Food insecurity is linked nationwide to poorer diet quality, chronic stress and greater likelihood of chronic disease diagnoses such as diabetes, high blood pressure and heart disease.

Other factors such as poverty and health care access also contribute to counties with higher food insecurity experiencing worse health outcomes. But reducing food insecurity is an important factor to consider as a way to improve health in Georgia. Because the characteristics of SNAP households differ from households who do not receive SNAP, it is difficult to measure how SNAP directly affects food insecurity. But one study that followed households for six months after entering the program found that receiving SNAP over that length of time was associated with a decrease in the food insecurity rate of about 5 to 10 percentage points.

In addition to increasing food security in Georgia, SNAP can help expand access to healthier foods by attracting new retailers. It can also promote healthier diets through nutrition education efforts such as SNAP-Ed. This program is linked to an increase in consumption and willingness to consume fruits and vegetables among child participants, according to a 2013 study commissioned by the U.S. Department of Agriculture.

Growth in Georgia SNAP Enrollment Associated with an Increase in SNAP Retailers
A 2016 study published in Health Affairs analyzed data on SNAP in Georgia before and after the Great Recession. The study found the number of SNAP participants increased by 87 percent from 2008 to 2011. Between 2007 and 2014, the number of Georgia SNAP retailers increased by 82 percent. SNAP can increase food availability by acting as an indirect subsidy to retailers, especially for smaller stores. The relationship between SNAP and the number of retailers can also be used a tool to increase availability of healthy foods.

The evidence supports the role of SNAP can play in improving the health of people. Georgians who live in communities with high food insecurity experience poor health outcomes and SNAP can help reduce hunger and chronic stress among Georgia families. Georgia ranks in the bottom 10 among states for overall health and for some chronic diseases such as diabetes. To improve the health of the state, it is important to protect and strengthen programs like SNAP with proven links to better health.