The $30.2 billion state budget signed into law by Gov. Kemp for FY 2023, which started July 1, 2022, represents a return to pre-pandemic levels of spending across most areas of government, albeit with state government employing nearly 5,800 fewer full-time staff in FY 2021 than it did in 2019, down nearly 9 percent, and struggling to combat an all-time high overall employee turnover of over 23 percent in a challenging economic environment.

Georgia’s governor holds unilateral authority to set the state’s revenue estimate. As such, under Gov. Kemp, the state responded to the 2020 pandemic-induced downturn by cutting spending and predicting relatively low levels of year-over-year growth in Georgia’s FY 2021 and 2022 revenue estimates. Simultaneously, the unprecedented, strong fiscal response at the federal level helped to create a rapid rebound and surge in economic activity, which was reflected in higher-than-expected state tax collections across both 2021 and 2022. The combination of these dueling responses has produced a cycle in which state revenue collections continue to significantly outpace spending, adding to an already historic level of un-obligated reserves available for allocation above the state’s Revenue Shortfall Reserve. Furthermore, the majority of the state’s $4.9 billion in flexible American Rescue Plan federal funds also remain available for use. However, decisions of whether to release federal funds for appropriation, or to spend them unilaterally, fall under the exclusive authority of the office of Georgia’s governor. On the other hand, while Georgia’s governor holds authority over whether to make surplus funds available for appropriation through the revenue estimate, responsibility for appropriating such funds falls under the jurisdiction of the General Assembly.

Entering fiscal year 2023, Georgia stands at a key inflection point, with an unprecedented level of resources on-hand, along with a current-year revenue estimate that is significantly below prior year collections. All of these indicators demonstrate the clear opportunity available to state leaders to respond to long-standing needs across public education, access to health care, and economic mobility during the 2023-2024 session of the General Assembly.

The Revenue Shortfall Reserve (RSR), Georgia’s rainy day fund, provides stability in economic downturns. The fund is like a savings account to pay expenses and maintain services when revenues decline unexpectedly. Maintaining adequate reserve money helps Georgia keep its AAA bond rating, allowing the state to borrow on favorable terms and save millions in interest. Money is not appropriated into the RSR; the balance grows at the end of each fiscal year if there is surplus state revenue (up to 15 percent of prior year revenue).

The governor is also authorized to release for appropriation any amount over the minimum balance required—4 percent of prior year revenues—in case of a fiscal emergency or if tax collections have outpaced estimates. Since the end of FY 2021, Georgia’s Revenue Shortfall Reserve has remained full at its maximum level, with consistently conservative revenue estimates issued by Gov. Kemp also resulting in an additional unobligated surplus.

At the close of 2022, the balance of Georgia’s Revenue Shortfall Reserve stands at approximately $5.2 billion, equivalent to 15 percent of prior year revenues, or enough to fund the state’s operations for approximately 74 days. After the RSR is filled to 15 percent of prior year revenues, any remaining funds are categorized as “unobligated surplus.” As of the conclusion of FY 2022, GBPI estimates the balance of the state’s unobligated surplus account to be in excess of $5 billion. 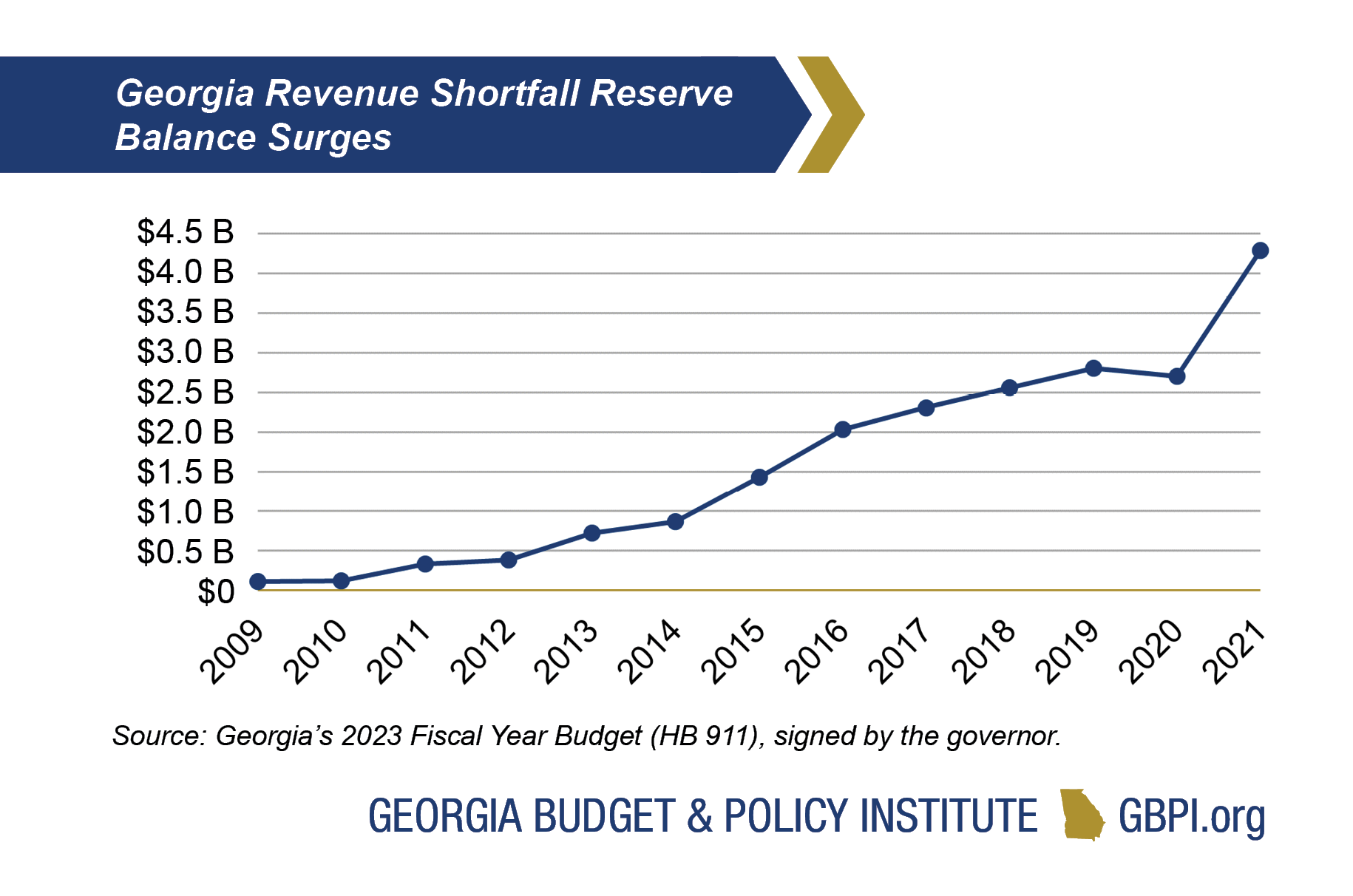 Georgia offers a wide array of tax credits, deductions and other tax breaks, also known as tax expenditures, that give preferential treatment to certain taxpayers and corporations to achieve policy goals. The tax breaks will cost the state greater than $10 billion in lost revenue in the 2023 fiscal year. Some tax breaks provide key protections for families, such as the sales tax exemption on groceries, while others provide credits or incentives to specific industries or special interest groups. Several of Georgia’s largest tax breaks deliver outsized gains to select groups or industries—such as manufacturing, film or insurance—often with questionable benefit to the state or its people.

Georgia lacks a standardized review process to measure and compare costs and benefits of all existing and proposed tax breaks. During the 2021-2022 session, however, the state enacted legislation that allows the chairs of the General Assembly’s tax-writing committees to request individual analyses on a limited number of tax expenditures.

The costliest industry-specific tax break offered is Georgia’s Film Tax Credit, which is designed to attract film production by subsidizing as much as 30 percent of the costs and ranks as the largest tax subsidy of its kind nationally at an annual cost greater than $1 billion. The state also offers major tax breaks targeted to insurance companies, multinational corporations and an array of individual industries. As state leaders commit billions in taxpayer dollars to finance an increasingly expansive ecosystem of tax credits, subsidies and indirect expenditures under the promise of accomplishing specific policy goals, such as job creation, greater transparency is urgently needed to provide a basic level of accountability and help safeguard future resources. 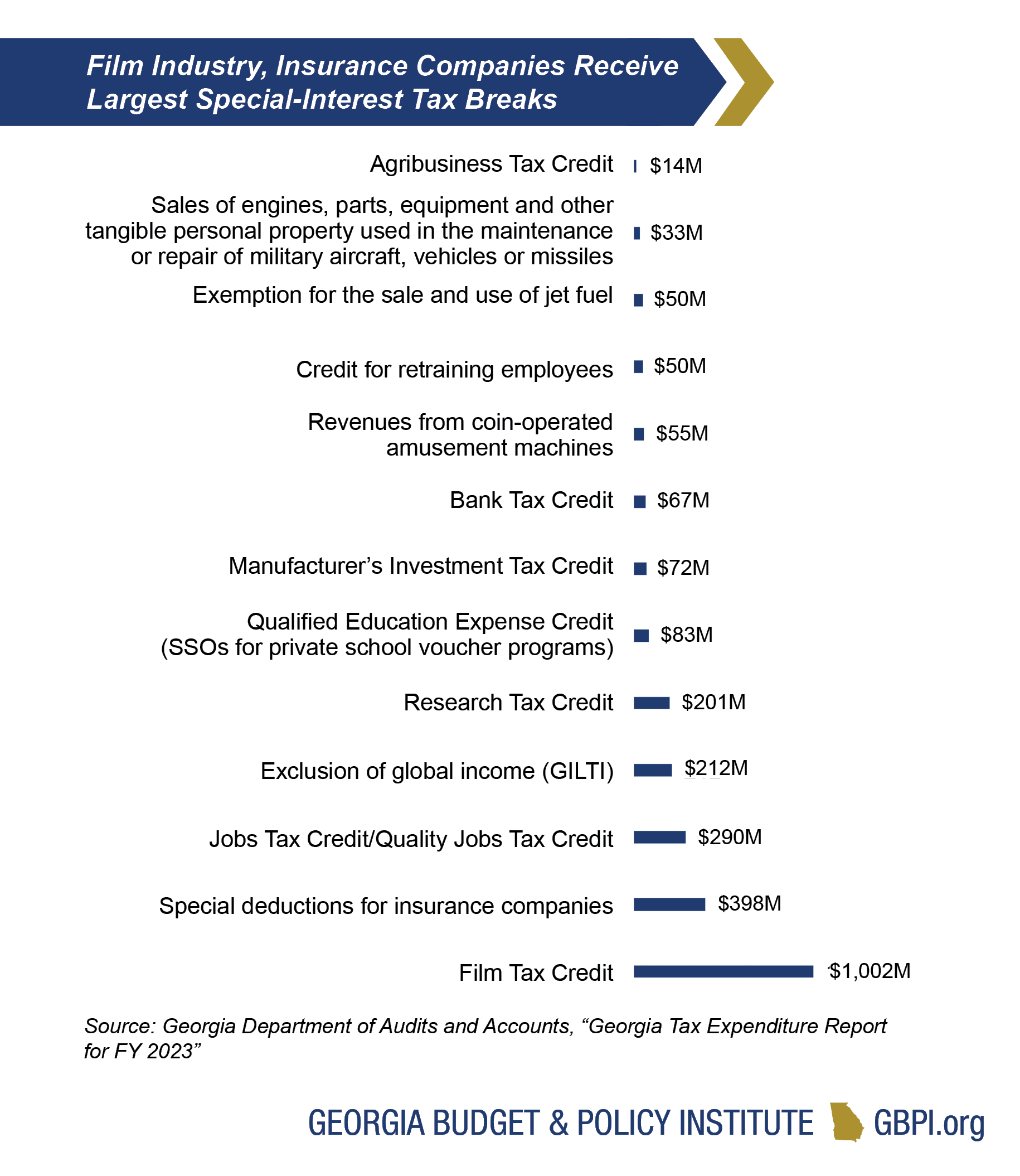 House Bill 1437, signed into law by Gov. Kemp after a final version emerged during the last hours of Sine Die 2022, sets Georgia on course to adopt a flat personal income tax that primarily benefits the state’s highest earners at an annual cost greater than $2 billion when fully implemented.

The flat tax plan requires overall revenue growth of at least three percent—with a 5-year look-back—to proceed without interruption through seven steps to achieve full implementation by 2030. However, forgoing $2 billion in annual personal income tax revenues threatens the long-term stability of Georgia’s revenue system and places a continued burden on the state’s ability to meet the needs of its residents. Already, Georgia ranks No. 48 out of 50 in the amount of general state revenues it raises per person (FY 2019).

For Georgia families earning the median income or less, these pending tax changes would offer little to lift incomes or meaningfully increase economic opportunity. Rather, the changes may redirect resources from programs and services that could otherwise support working families to instead widen disparities across income, race and ethnicity. Unless further action is taken, the tax changes will become effective beginning on January 1, 2024, and are set to be implemented over a period of at least 7 years. If the state’s revenue estimate does not meet the prescribed benchmarks, the implementation of each prospective tax change would be delayed by one-year. 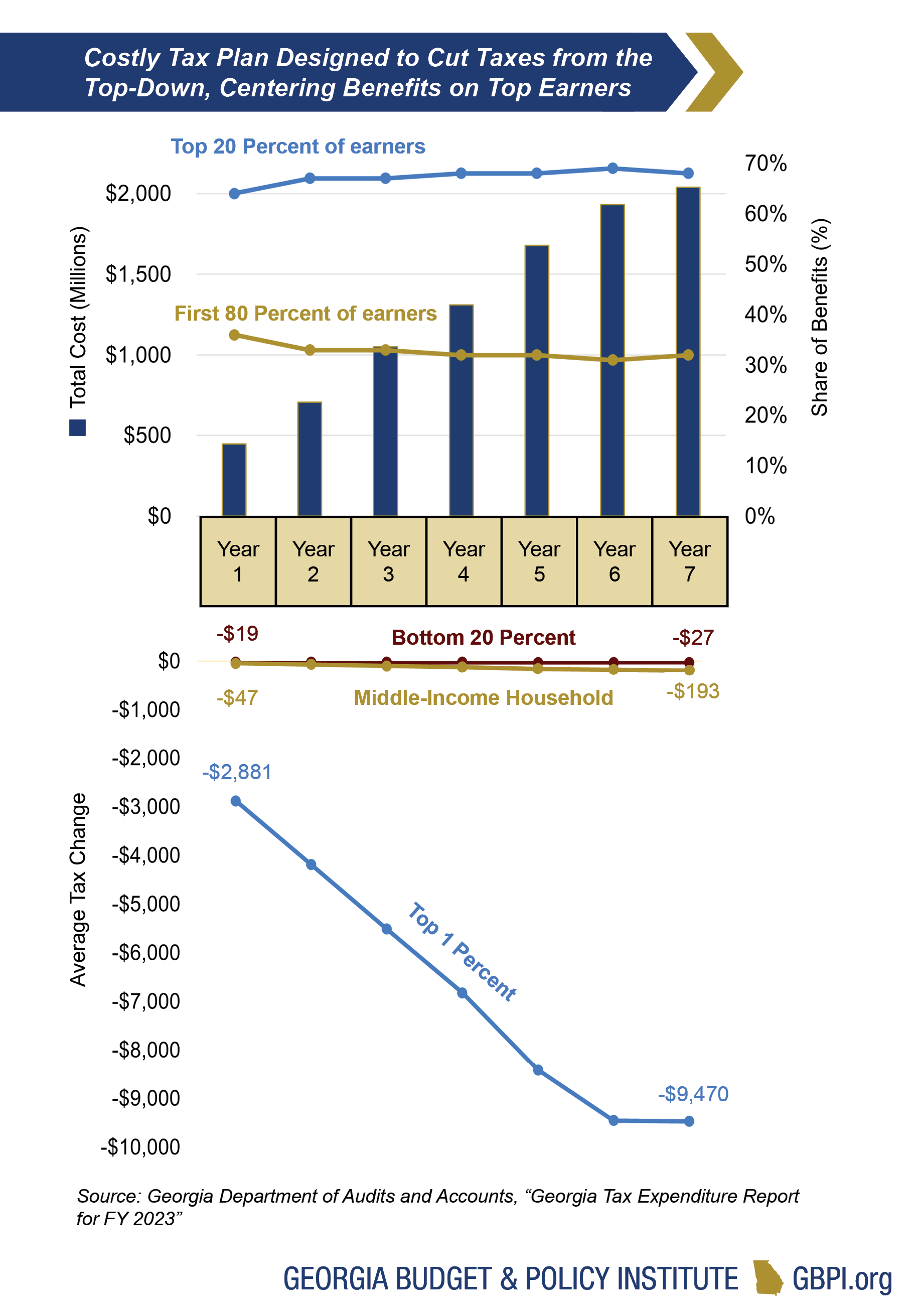