Georgia lawmakers cut $1 billion from the state’s budget for the Department of Education. The bulk of these cuts, totaling $950 million, will be passed on to 181 local K-12 school systems. State support for private school vouchers through tax credits and direct state funding face no budget cuts. Public school leaders will have to grapple with this 10 percent drop in state funding despite significant costs that many will experience as they continue to adapt to COVID-19. The remaining budget for the Department of Education is $9.6 billion for FY 2021.

The 2021 budget also cuts 10 percent from state higher education agencies, resulting in a budget of $2.3 billion for the University System of Georgia and $334 million for the Technical College System of Georgia. The state allocates $126 million in state funds for education programs administered by the Georgia Student Finance Commission, including Dual Enrollment, which pays for high school students to take college courses. Lawmakers cut the 2021 budget for Dual Enrollment by $11 million following passage of legislation creating restrictions on student grade levels and courses.

Georgia lawmakers rejected calls to raise revenues during the 2020 General Assembly, resulting in steep cuts to education. The state has only fully funded the Quality Basic Education formula (QBE, which dictates the majority of state education funding) for two of the last 19 years. With the new cuts of $950 million to public education, children that began Kindergarten in FY 2009 will have attended schools that experienced $8.8 billion in cuts before they graduate.

The years following the Great Recession showed that school leaders faced with steep budget cuts were likely to increase class sizes, furlough teachers, shorten the school year and eliminate elective courses. In FY 2021, Georgia’s schools will have less funding for additional costs that promise to arise due to the novel coronavirus, such as cleaning supplies or professional development for teachers facing continued online instruction. 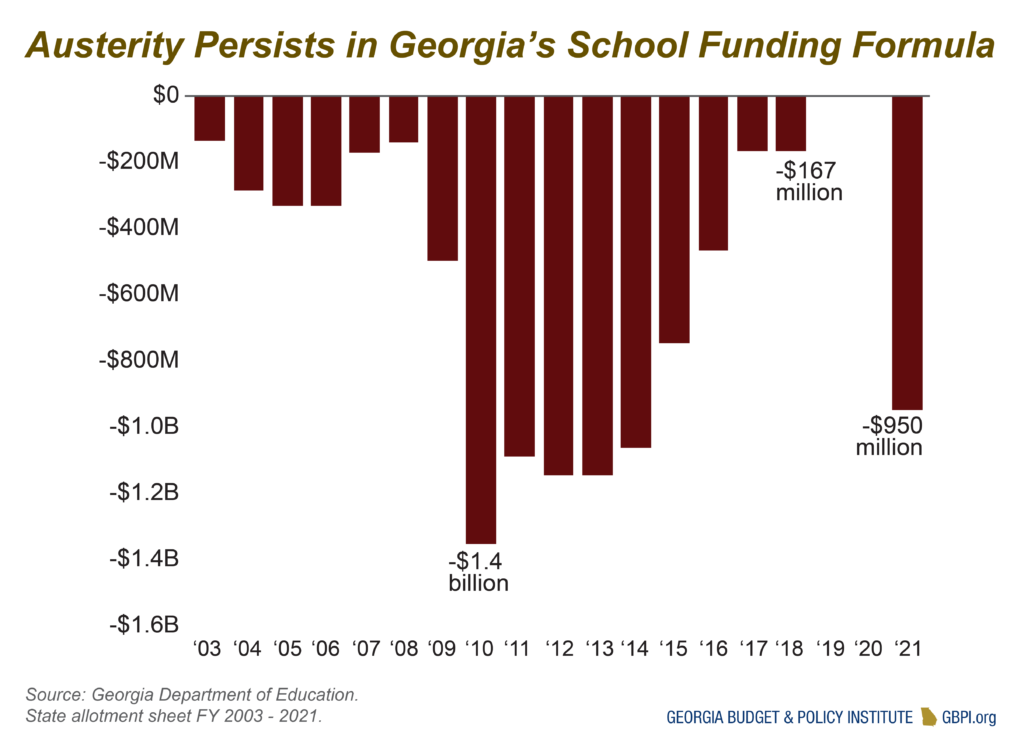 Black Georgians have traditionally received significantly fewer state dollars for public education than their white counterparts. Relatively recent state policies have acted to equalize the funding for schools regardless of the students’ racial makeup. Even with these fiscal policies, however, school districts that are more rural, low-income and have majority-Black student populations face high obstacles to accessing the same educational opportunities as the rest of the state. These districts reside primarily in Georgia’s Black Belt, a swath of Middle and Southwest Georgia where slavery was once concentrated and where many Black Georgians live today. Throughout the pandemic, school district leaders have struggled to plan how to educate children while also keeping the community safe. The lack of availability of high-speed internet leaves many Georgians unable to fully participate in a constitutionally-required free, public education.

There is no uniform definition of the Black Belt in Georgia or throughout the Southeast. What began as a regional description based on the coloring and fertility of the soil has morphed into a term to generally describe communities in the Southeast with a majority-Black population or where the majority of people live in poverty. GBPI’s analysis considered a school district as part of the Black Belt if they operate in an area that previously had enslaved people greater than 40 percent of the population or if their current student body enrollment exceeded a 30 percent Black population and 30 percent or more of their students were living in poverty. 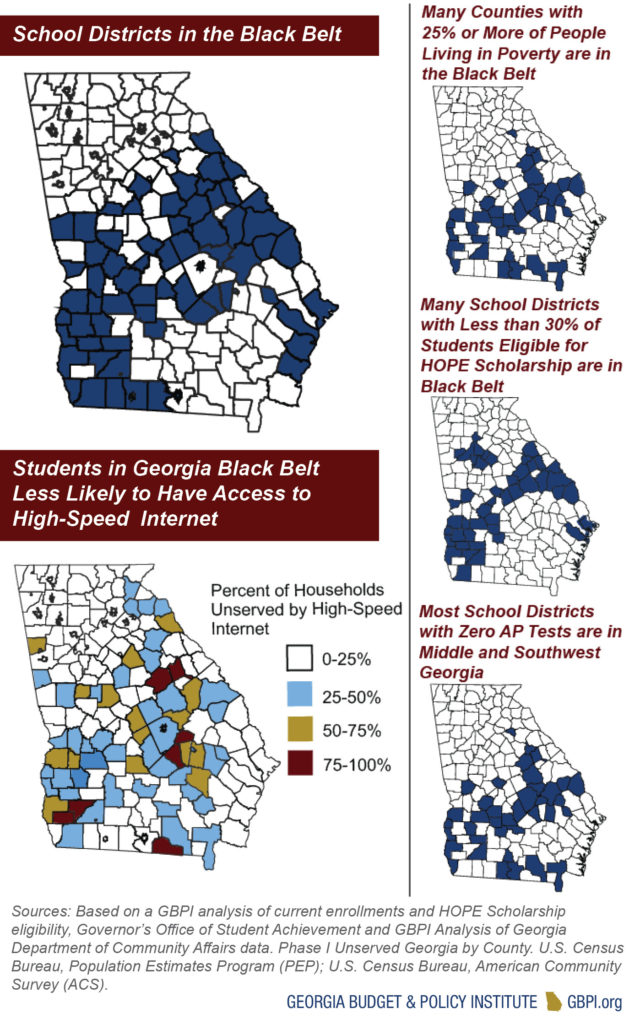 Costs driven by factors such as the price of diesel fuel or the number of students enrolled have increased steadily while state funding has remained flat or decreased during the past two decades. This growth has continued the state trend of reducing its contribution to student transportation funding since 1991, when it covered 54 percent. In FY 2019 the state paid 13 percent of the total cost of pupil transportation. 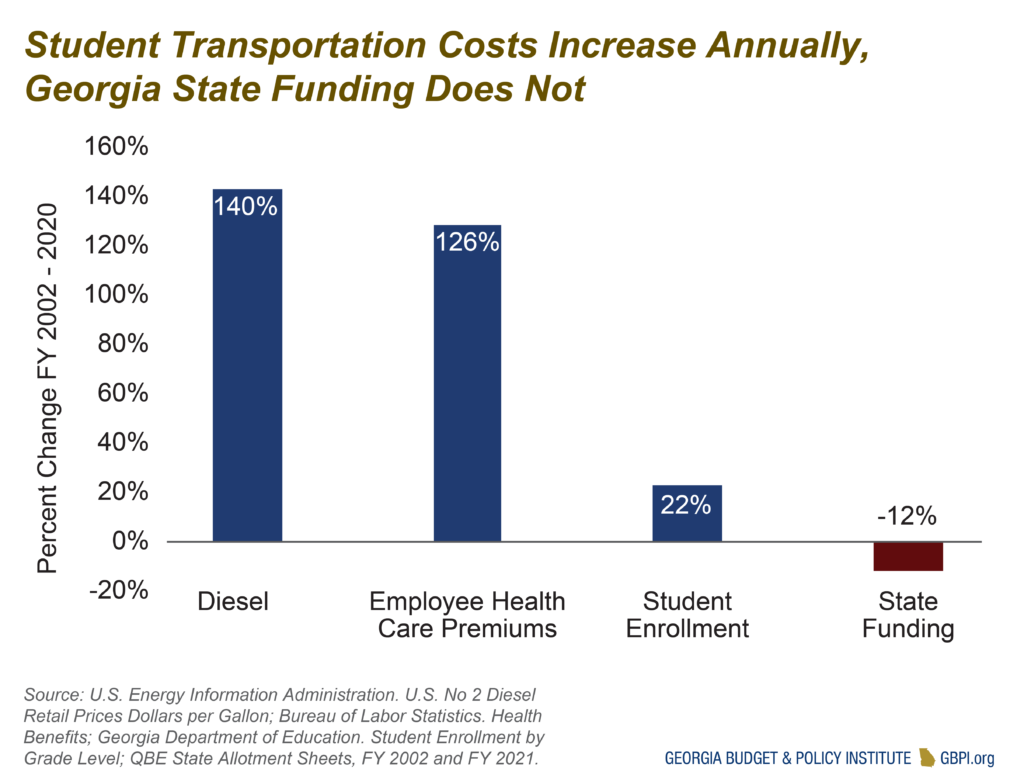 Pre-Kindergarten funding remains steady in FY 2021 due to consistent lottery proceeds during the pandemic. Steady funding, however, is not the same as providing world-class early childhood education. For example, while lead teachers were allotted funding for a $3,000 raise in FY 2020, certified pre-K centers are only provided $16,190 for assistant teachers regardless of the employee’s training or experience. This pay could keep some qualified professionals from seeking those jobs.

Moreover, stagnant funding keeps Georgia’s pre-K program from expanding and providing reimbursements to child care providers for capital improvements such as roof repair or air conditioning. Georgia provides less per student in the program than the state did a decade ago. In FY 2011 Georgia allocated the equivalent of $5,050 per student. When taking inflation into account, that is $352 more than in the current budget cycle. 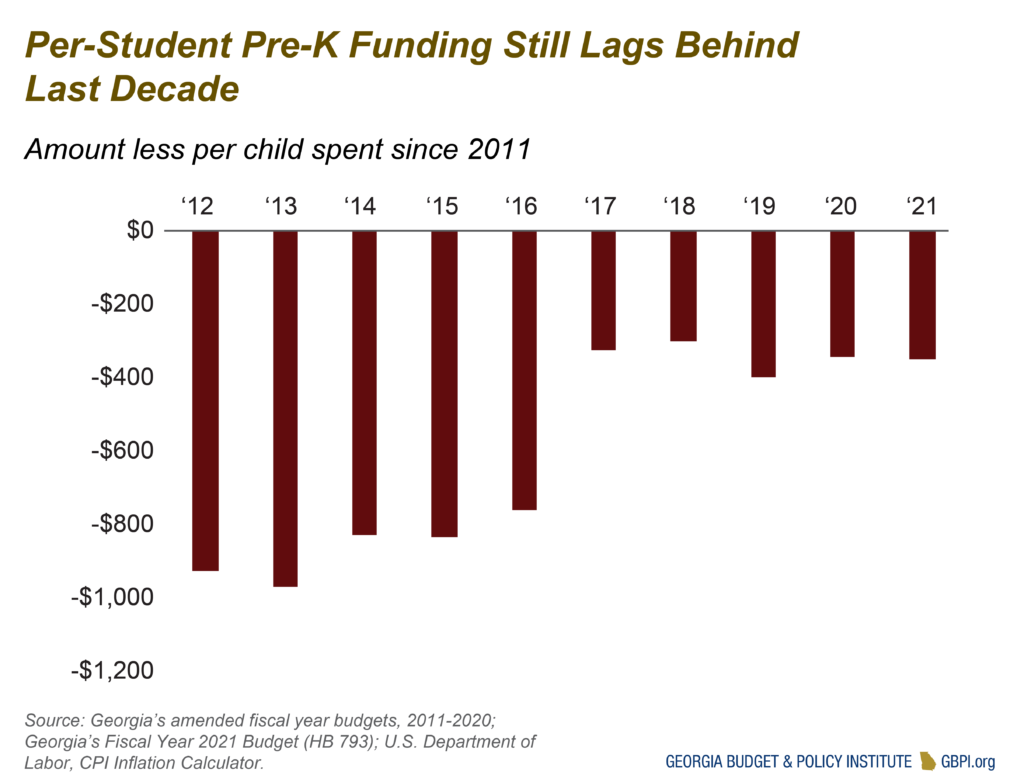 The 2021 budget cuts $11 million in state funds from Dual Enrollment, resulting in a final budget of $90 million. The Georgia Student Finance Commission, which administers the program, projects that recent policy changes will allow the agency to maintain payments to colleges delivering Dual Enrollment. Originally, the state paid colleges for tuition, mandatory fees and books, as well as funding transportation grants. As participation grew, funding was cut for transportation grants, mandatory fees and books. 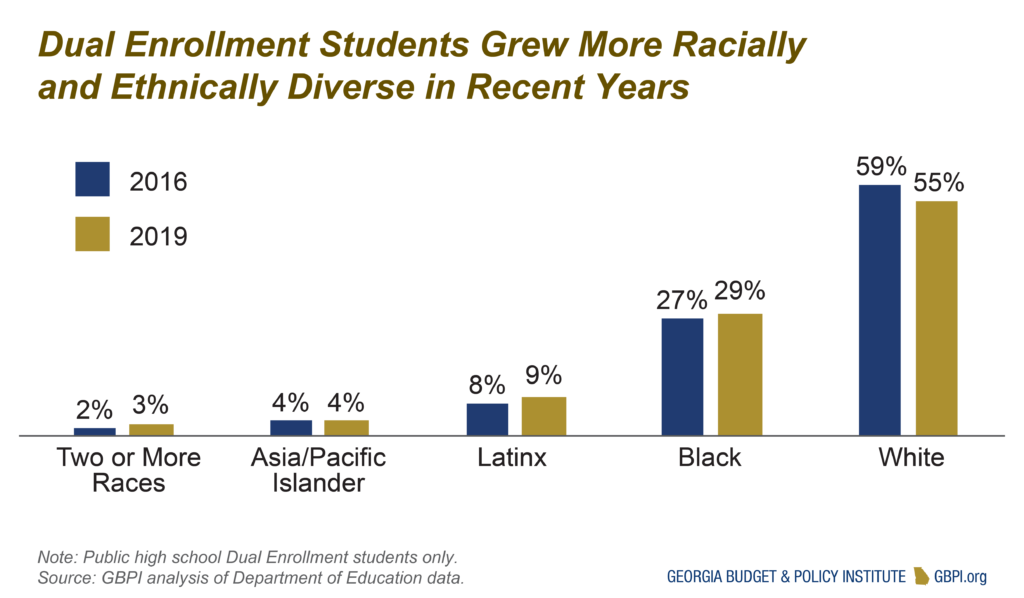 The 2021 budget for the university system is $2.3 billion. Georgia allocates $2 billion to colleges and universities for student instruction. Remaining funds go to agricultural services, public libraries and other programs connected to universities. The state appropriates funds to the Board of Regents, which manages the system and allocates money among its 26 schools.

This year’s budget represents a 10 percent cut in state funding: a $261 million reduction overall, including a $233 million reduction to colleges. This cut is the sharpest one-year drop in university system history and eliminates many currently held and vacant faculty and staff positions. The federal CARES Act allocates a total $158 million to Georgia colleges, with restrictions on most funds to address costs related to instructional changes due to the coronavirus pandemic. 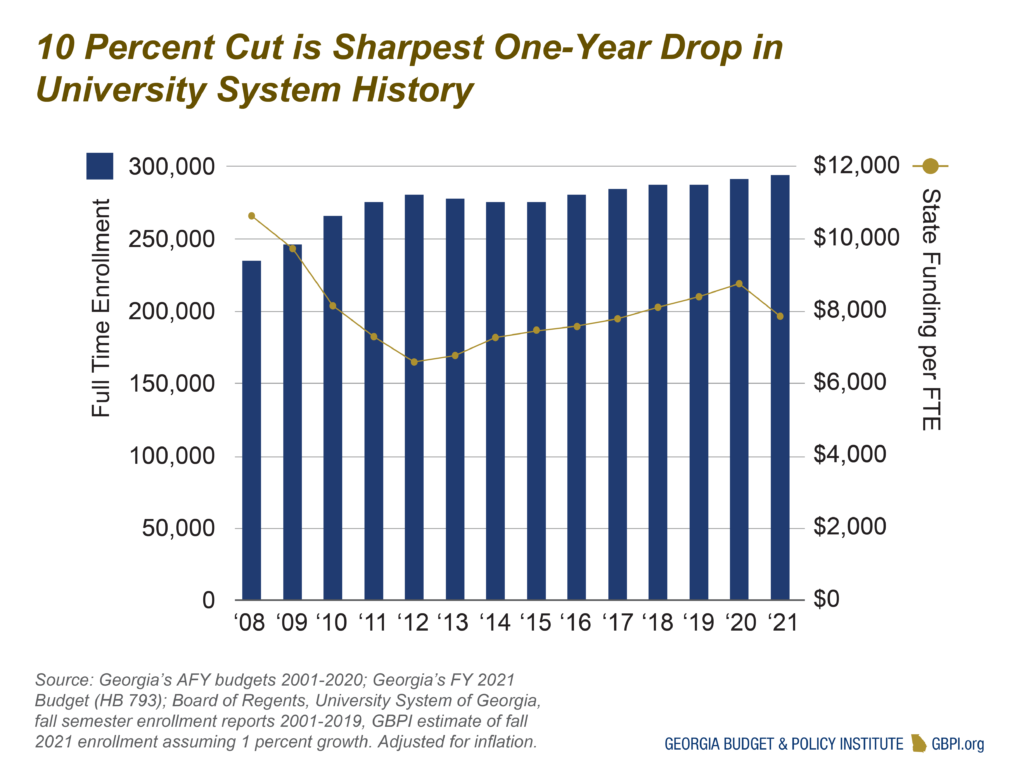 The federal CARES Act provides an additional $37 million for technical colleges, with restrictions on most funds to address costs related to instructional changes due to the coronavirus pandemic. 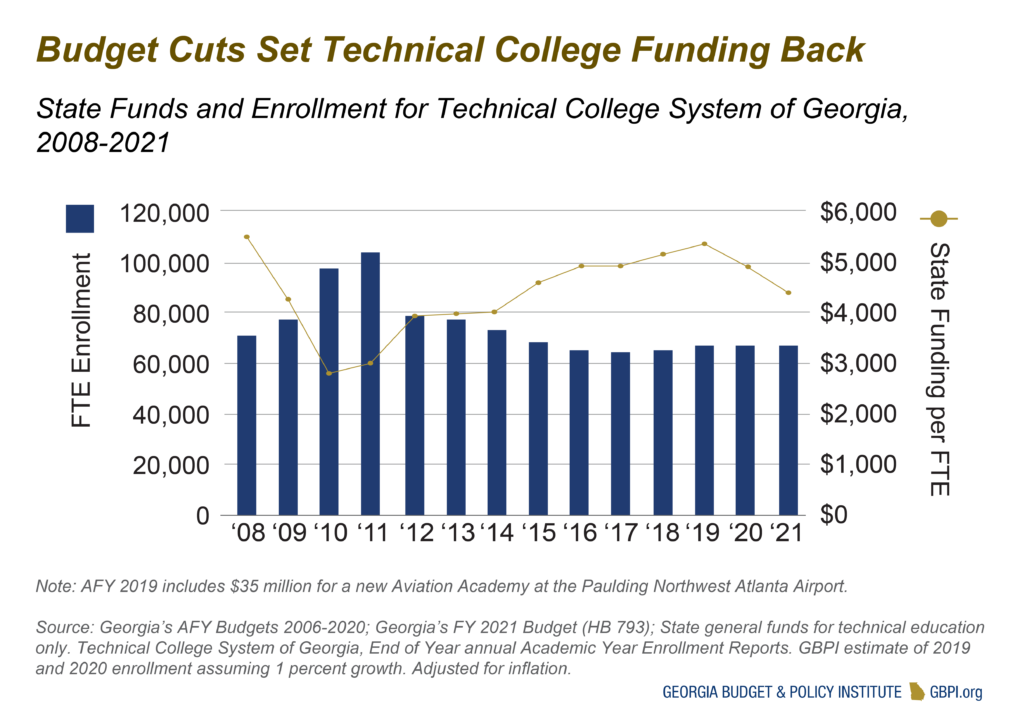 Every year, unspent lottery dollars transfer to reserves managed by the State Treasury. At the end of the 2019 fiscal year, about $79 million in surplus transferred to the lottery reserves.

Since 2011, state law requires the lottery shortfall reserve to hold an amount equal to 50 percent of the previous year’s net lottery proceeds. If lottery ticket sales underperform, the state can draw on this reserve to fund HOPE. After reaching the 50 percent target, additional reserves are considered unrestricted.