Health care services are primarily delivered through three state agencies, the departments of Community Health, Public Health and Behavioral Health and Developmental Disabilities. State funding for these three agencies totals nearly $4.5 billion in 2017, which is about 20 percent of total state spending. General fund appropriations account for $3.9 billion, or about 87 percent, while other sources total about $577 million. Money from the general fund portion of the state budget for these three agencies grew by nearly $300 million from 2016 to 2017.

The Department of Community Health is the largest of Georgia’s three health care agencies. It accounts for more than $3.2 billion, or 71 percent of total state spending on health care. It operates Georgia’s Medicaid and PeachCare programs, some planning and regulatory functions and the State Health Benefit Plan that provides health care to state employees and teachers. Funding for the state health plan comes from school districts, state agencies and their employees and retirees and is not counted in the state spending figure above.

Georgia plans to spend about $1 billion on behavioral health and developmental disabilities, which includes some services funded through Medicaid. This is about 23 percent of Georgia’s 2017 health care expense.

The Department of Public Health operates a variety of population-based health programs such as immunizations, health screening and infectious disease control. It receives $260 million, or about 6 percent of Georgia’s health spending.

Medicaid and PeachCare are expected to serve more than 2 million Georgians in 2017. The programs are important sources of health coverage for children, pregnant women, low-income seniors and people with physical and developmental disabilities. Medicaid and PeachCare cover nearly half of all children in Georgia. More than 1.3 million children are likely to get covered through the two programs in 2017, or more than 63 percent of all Georgians enrolled in them. Medicaid also pays for more than half of all births in Georgia.

Low-Income Medicaid serves pregnant women, children and some parents with very low incomes. The Aged, Blind & Disabled portion of the program serves the elderly and people with a qualifying disability. Most enrollees qualify through the low-income Medicaid program, but the majority of spending is for elderly and disabled patients. PeachCare is a separate program serving children from families with income above the Medicaid threshold, but who often lack access to employer-sponsored coverage.

Bulk of Medicaid Spending is for Children, Seniors

Georgia’s low rank by both measures belies the harsh health and economic realities faced by much of its population. Georgia’s population consistently scores poorly in national health assessments, suggesting higher per-enrollee spending than most states is needed. Georgia ranked sixth worst for poverty in 2012, which also suggests higher per-capita spending is appropriate to pay for an exceptionally large population of Medicaid-eligible residents.

However, more than 300,000 uninsured Georgians fall into a coverage gap as a result of the state’s decision not to expand Medicaid eligibility to working-poor adults. Federal tax credits kick in when family income reaches the federal poverty level, about $20,200 for a family of three or $11,900 for an individual. Georgia Medicaid covers non-disabled adults only if they have dependent children and also have income below about 38 percent of the poverty level. To date, Georgia’s leaders have rejected federal money to cover these uninsured Georgians through Medicaid. 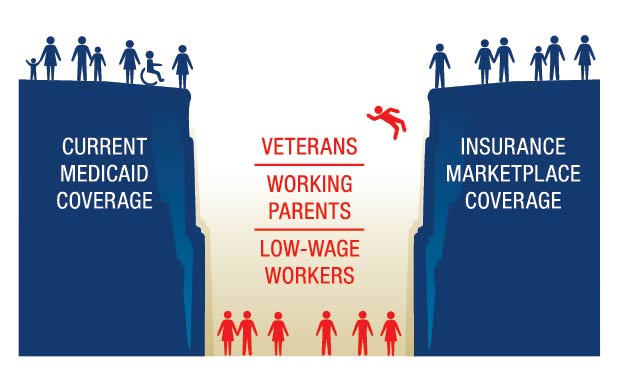 The Department of Behavioral Health and Developmental Disabilities operates a variety of programs that serve Georgians with mental health needs, addiction and developmental disabilities. The department also operates programs for forensic evaluation and treatment for Georgians under court jurisdiction. The department is budgeted to receive more than $1.02 billion in 2017 from the general fund along with $10.3 million in tobacco settlement money, a combined increase of $43.6 million compared to 2016.

Georgia entered into a legal settlement in 2010 with the U.S. Department of Justice that lays out a plan for the state to increase its mental health and developmental disability services in home or community settings relative to institutions. From 2010 to 2016 the state spent $172.7 million to meet the terms of the settlement. Money added in 2017 continues the trend of increased funding for these services, including:

Georgia’s public health programs also receive significant federal support. Federal money accounts for nearly 60 percent of department’s $671.8 million budget in 2017, while state funding accounts for the rest. The federally-funded Special Supplemental Nutrition Program for Women, Infants and Children, also known as WIC, makes up the bulk of the federal funds and more than a third of the department’s budget for 2017.

Much of Public Health Funding Flows to County Health Departments