Health care services are primarily delivered through three state agencies: the departments of Community Health, Public Health and Behavioral Health and Developmental Disabilities. State funding for these three agencies totals $4.5 billion in 2018, about 18 percent of total state spending. General Fund appropriations for these agencies account for $3.9 billion, or about 87 percent, while other sources total about $620 million. Money from the General Fund for these three agencies grew by $39 million from 2017 to 2018.

The Department of Community Health is the largest of Georgia’s three health care agencies. It accounts for $3.1 billion, or 70 percent of total state spending on health care. It operates Georgia’s Medicaid and PeachCare programs, some planning and regulatory functions, and the State Health Benefit Plan that provides health care to state employees and teachers. Funding for the state health plan comes from school districts, state agencies and their employees and retirees and is not counted in the state spending figure above.

Georgia plans to spend $1.1 billion on behavioral health and developmental disabilities, which includes some services funded through Medicaid. This is about 24 percent of Georgia’s 2018 health care expense.

The Department of Public Health operates a variety of population-based health programs such as immunizations, health screenings and infectious disease control. It receives $275 million, or about 6 percent of Georgia’s health spending.

Medicaid and PeachCare are expected to serve more than 2 million Georgians in 2018. The programs are important sources of health coverage for children, pregnant women, low-income seniors and people with physical and developmental disabilities. Medicaid and PeachCare cover nearly half of all children in Georgia. More than 1.3 million children, two-thirds of total state enrollees, are covered through the two programs. Medicaid also pays for more than half of all births in Georgia.

Low-Income Medicaid serves children, pregnant women and some parents with very low incomes. The Aged, Blind & Disabled portion of the program serves the elderly and people with a qualifying disability. Most enrollees qualify through the low-income Medicaid program, but the majority of spending is for elderly and disabled patients. PeachCare is a separate program that serves children from families with income above the Medicaid threshold but often lack access to employer-sponsored coverage. PeachCare is entirely funded by the federal Children’s Health Insurance Program.

Bulk of Medicaid Spending is for Seniors and Disabled People

Georgia expects to spend nearly $3 billion in state funds to serve more than 2 million residents covered by Medicaid and PeachCare, a modest amount by national standards. Georgia’s spending per Medicaid enrollee ranked fifth lowest among the states in 2014. This mark was 32 percent below the national average.

Georgia’s low rank by both measures underscores the harsh health and economic realities faced by much of its population. Georgia’s population consistently scores poorly in national health assessments, suggesting higher per-enrollee spending than most states is needed. Georgia had a poverty rate of 17 percent and ranked 10th worst for poverty among states in 2015. The uninsured rate in Georgia is the second-highest in the country. This suggests that higher per-capita spending is appropriate to pay for a large population of Medicaid-eligible residents.

A greater investment in Medicaid would allow the state to expand health services and increase the rates of reimbursement for health care providers. The 2018 Budget adds nearly $18 million in new state funds to boost reimbursement rates for some primary care services, but bringing Georgia’s investment closer to the national average will require more widespread funding increases.

More than half of federal payments made to the state of Georgia are for Medicaid and PeachCare. The 2018 budget includes $7.2 billion in federal money for Medicaid, 66 percent of Georgia’s total Medicaid budget. PeachCare is projected to receive $461 million from the federal government in 2018.

The 2018 budget expands behavioral health services for children and increases primary care provider reimbursement rates. The state is leveraging legal settlement funds and a fee paid by health care providers to draw down new federal dollars for these investments. In the 2018 budget, Georgia receives $2.17 for every $1 in state funds invested in the Medicaid program.

The Georgia hospital provider fee is expected to raise $310 million in 2018. This revenue is matched with federal Medicaid dollars. Lawmakers renewed the provider fee this year until 2020, preventing a budget shortfall of more than $900 million in both state and federal funds.

Proposals to change the financing structure of Medicaid include block grants and capping federal payments per enrollee. These changes would shift significant costs to the state, resulting in cuts to the Medicaid program and a strain on other areas of the budget such as education, transportation and public safety. Preserving the existing structure of Medicaid is critical to ensure the state can meet the health care needs of residents and strengthen the health care system.

The Department of Behavioral Health and Developmental Disabilities operates programs that serve Georgians with mental health needs, addiction and developmental disabilities. The department also operates programs for forensic evaluation and treatment for Georgians under court jurisdiction. The department is set to receive more than $1.08 billion in 2018 from the General Fund along with $10.3 million in Tobacco Funds, a combined increase of $65.2 million compared to 2017.

Georgia entered into a legal settlement in 2010 with the U.S. Department of Justice that laid out a plan for the state to increase its mental health and developmental disability services in home or community settings and rely less on institutions. The 2018 budget adds $38 million for the department to continue providing home and community-based services and reduce the waiting list for these services. 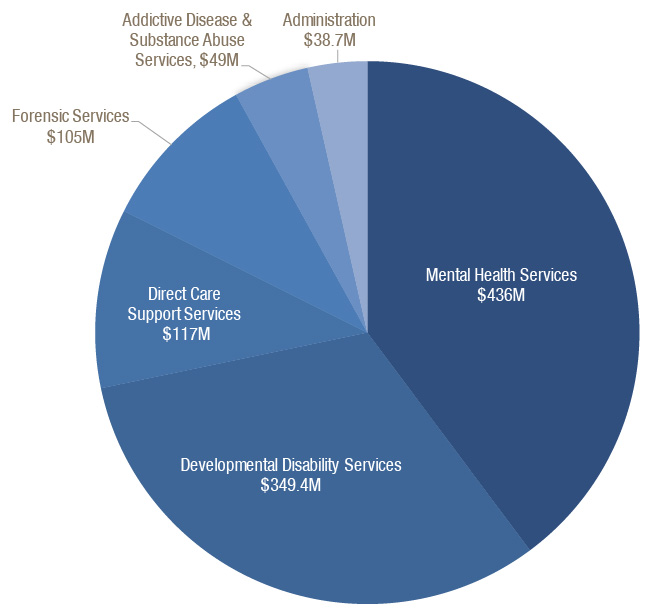 The Department of Public Health operates a variety of programs focused on health promotion, disease prevention and health-related disaster response and preparedness. The department is set to receive $243.8 million from the General Fund and $13.7 million in Tobacco Settlement money in 2018. The trauma care network commission, which is included in the department’s budget, receives $16.4 million from the General Fund. The largest state-funded programs provide financial assistance to county health departments, aim to prevent the spread of infectious disease and provide treatment and health promotion services aimed at children and infants. The department’s 2018 budget represents a $14.8 million increase compared to 2017.

Georgia’s public health programs also receive significant federal support. Federal money accounts for 58 percent of the department’s $686.5 million budget in 2018, while state funding accounts for the rest. The federally funded Special Supplemental Nutrition Program for Women, Infants and Children, also known as WIC, makes up the bulk of the federal funds and more than a third of the department’s total budget for 2018.

Much of Public Health Funding Flows to County Health Departments