You can download and share all the images and charts in the Health Care Primer by clicking here.

Three state agencies are primarily responsible for health care services in Georgia: the departments of Community Health, Public Health and Behavioral Health and Developmental Disabilities. State funding for these three agencies totals $5.1 billion in 2020, about 19 percent of state general spending.

The Department of Community Health accounts for $3.57 billion or 70 percent of total state spending on health care. It operates Georgia’s Medicaid and PeachCare programs, conducts some planning and regulatory functions, and administers the State Health Benefit Plan that provides health care to state employees and teachers. Funding for the state health plan comes from school districts, state agencies and their employees and retirees.

Georgia plans to spend about $1.2 billion, or 24 percent of Georgia’s 2020 health care expense, on behavioral health and developmental disabilities. This includes some services funded through Medicaid.

The Department of Public Health operates a variety of population- based programs such as immunizations, health screenings and infectious disease control. It receives $277 million, or about 6 percent of Georgia’s 2020 health spending.

Medicaid and PeachCare serve about 2 million Georgians, or one in five residents. The programs are important sources of health coverage for children, pregnant women, low-income seniors and people with physical and developmental disabilities.

Medicaid and PeachCare cover nearly half of all children in Georgia, or about 1.3 million children. Medicaid also pays for more than half of all births in Georgia. PeachCare is a separate program serving children from families with incomes above the Medicaid threshold, but who often lack access to employer- sponsored coverage. PeachCare is mostly funded by the federal Children’s Health Insurance Program.

Medicaid is the main source of health coverage for Georgians with long-term health care needs, both in nursing homes and in community-based settings. Medicaid is the primary payer for three-fourths of nursing home patients in Georgia. Medicaid also helps pay Medicare premiums for more than 170,000 older Georgians.

Low-Income Medicaid serves children, pregnant women, and some parents with very low incomes. The Aged, Blind and Disabled portion of the program serves the elderly and people with a qualifying disability. Most Medicaid enrollees qualify through the low-income program, but the majority of spending is for elderly and disabled patients. 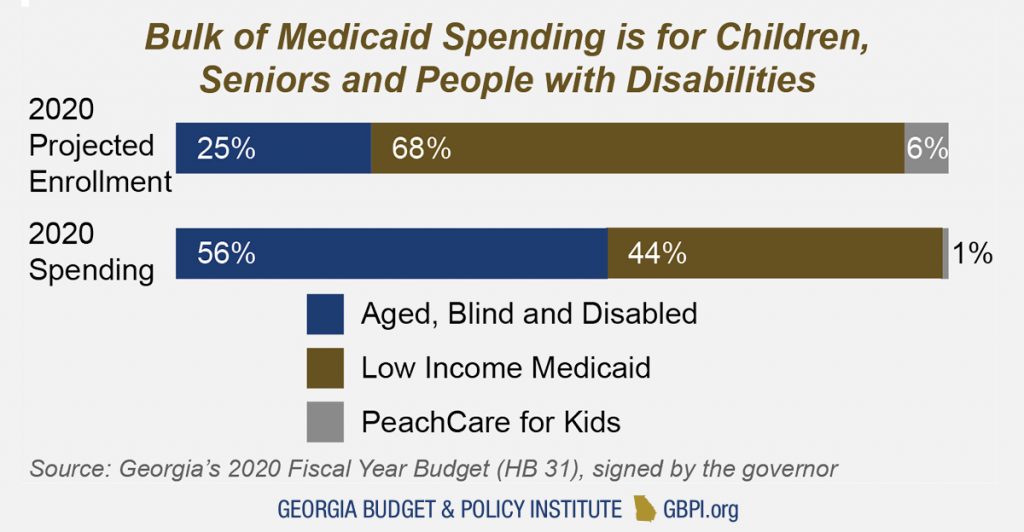 Georgia continues to face health care challenges such as a high uninsured rate, rural hospital financial strains, worker shortages and rising care costs. In 2019, Gov. Brian Kemp signed legislation to allow the state to pursue two types of waiver plans to the federal government. The 1115 waiver allows states to modify federal rules related to their Medicaid programs, and the 1332 waiver allows states to modify rules related to the federal health care marketplace. Georgia’s amended 2019 budget provided $2.6 million for hiring a private consultant to provide policy recommendations for both of these waivers. This included $1.6 million in state money, matched with $1 million in federal funds. 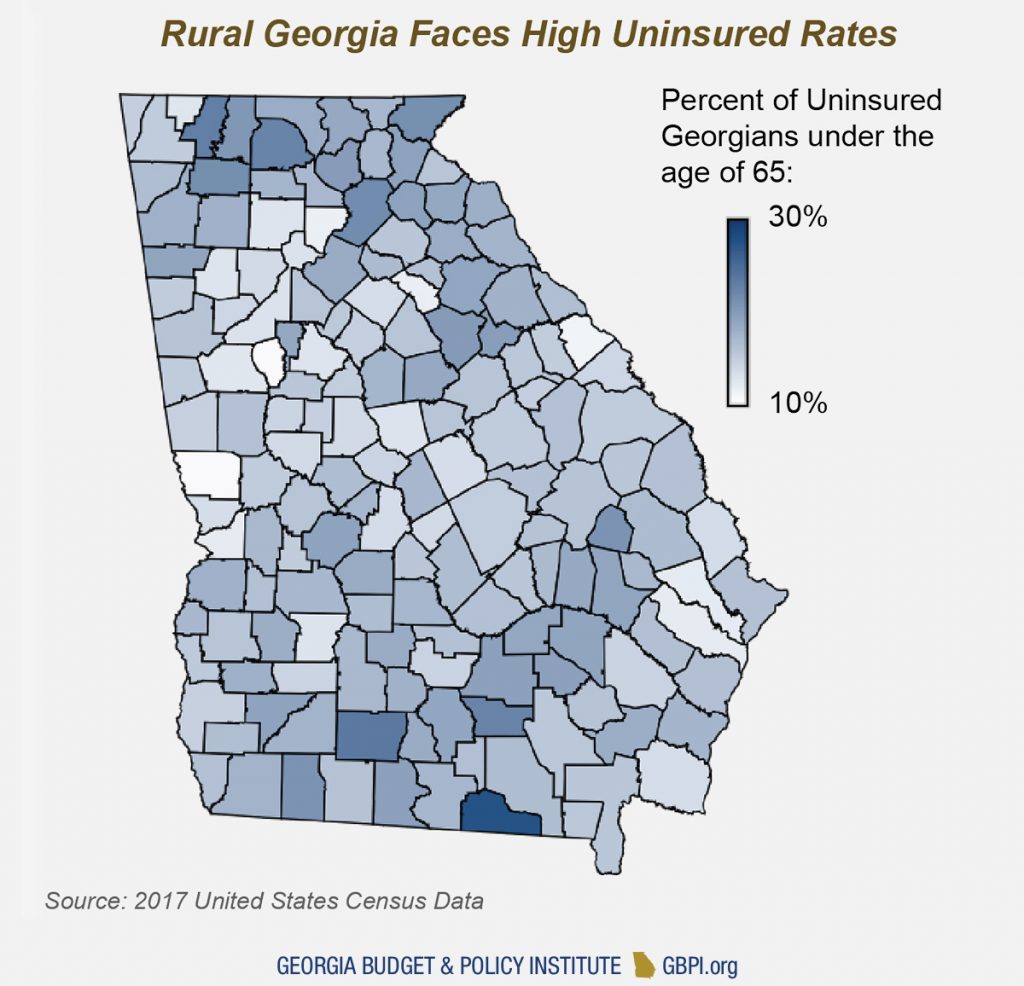 Lawmakers passed legislation in 2019 that allows the state to submit a waiver request to increase Medicaid eligibility up to the poverty line, or $12,100 a year for an individual. If the state covers everyone in that range, more than 267,000 additional uninsured Georgians would qualify for Medicaid coverage. The federal government agrees to pay for 90 percent of the costs for expanding Medicaid eligibility up to about $16,000 a year for an individual. Because Georgia’s waiver plan falls short of that threshold, the state might only get its current 67 percent matching rate unless there is a change in federal rules. The state cost for implementing the waiver plan is not included in this year’s budget. Money will need to be added in the 2021 budget to cover the state’s share of waiver-associated costs.

The 1332 Waiver – Goal is to Reduce Marketplace Premiums

This waiver aims to allow Georgia to make changes to the federal health insurance marketplace where about 450,000 Georgians buy their health insurance coverage. Lawmakers did not include any specific requirements for the proposal in the authorizing legislation. Lawmakers did suggest some ideas, such as creating a reinsurance program, changing the premium tax credits and redefining essential health benefits. The reinsurance program is the most common option states use for this waiver, and it has had success reducing marketplace premiums. States pay for most of the reinsurance program costs through federal pass-through funding, but are responsible even if this federal amount falls short of the program costs. The 1332 waiver might not affect the state budget as federal money could cover most of the costs. However, the state still might need to spend money on administration of the plan, which will be a responsibility of the Department of Insurance.

Georgia expects to spend $3.4 billion in state funds to serve the nearly 2 million Georgians covered by Medicaid and PeachCare, a modest amount by national standards. Georgia’s spending per Medicaid enrollee ranked fifth lowest among the states, coming in at 32 percent below the national average in 2014, the most recent year available. Georgia ranked last in Medicaid spending per low- income resident in 2015.

Georgia’s low rank by both measures belies the harsh health and economic realities faced by much of its population. Georgia consistently scores poorly in national health assessments, suggesting higher per-enrollee spending than most states is needed. Georgia had a poverty rate of 15 percent and ranked 10th worst for poverty among states in 2017. The uninsured rate in Georgia is the fourth-highest in the country. This suggests that higher per-capita spending is appropriate to pay for a large population of Medicaid-eligible residents.

A greater investment in Medicaid can allow the state to expand health services and increase the rates of reimbursement for health care providers. The 2020 budget adds new state money over the prior year to boost reimbursement rates for dental care and nursing home direct care. The last significant increase in reimbursement for primary care and OB/GYN doctors was in the 2018 budget when lawmakers increased rates to 2014 Medicare levels. Georgia needs to invest more to bring the state closer to the national average.

The Department of Behavioral Health and Developmental Disabilities operates a variety of programs that serve Georgians with mental health needs, addiction and developmental disabilities. The department also operates programs for forensic evaluation and treatment for Georgians under court jurisdiction. The department receives more than $1.2 billion in 2020 from the General Fund along with $10.3 million in Tobacco Funds, a combined increase of $73.7 million compared to 2019.

Georgia entered into a legal settlement in 2010 with the U.S. Department of Justice that laid out a plan for the state to increase its mental health and developmental disability services in home or community settings relative to institutions. The state invested $256 million new state dollars from 2011 to 2018, including supported housing for people moving out of institutions, strengthening the behavioral crisis response system and adding new community-based behavioral health services. 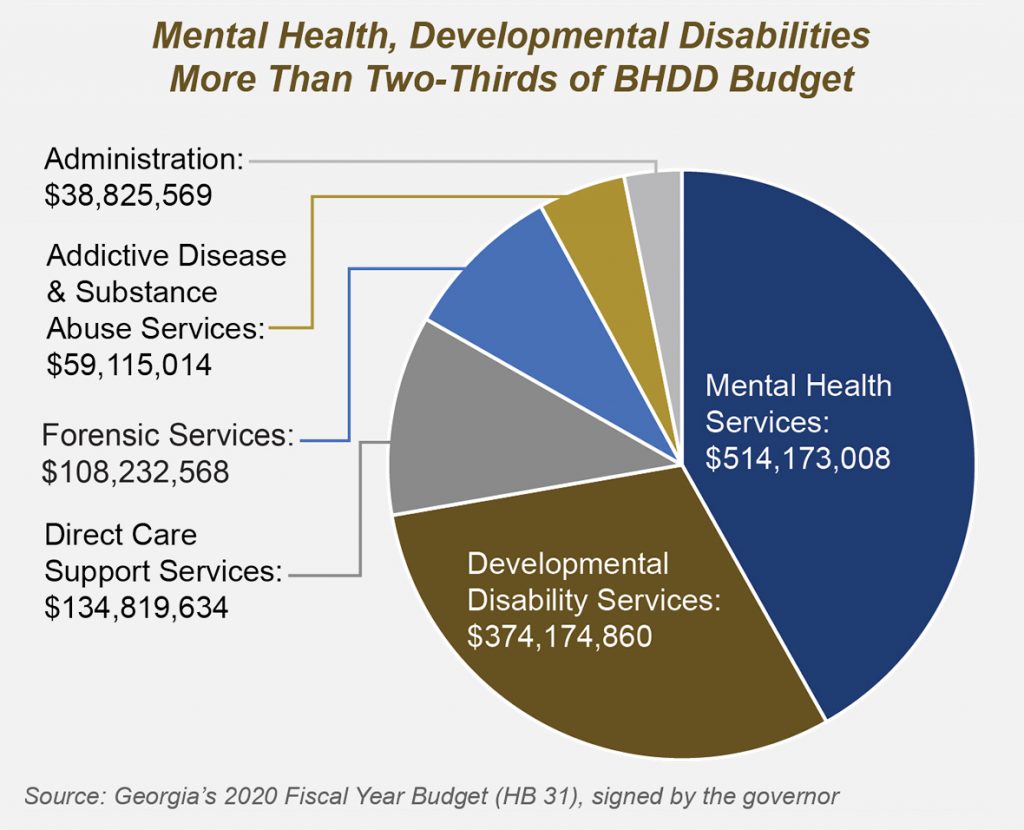 The Department of Public Health operates a variety of programs focused on health promotion, disease prevention and health- related disaster response and preparedness. The department receives $277 million from the General Fund and $13.7 million in Tobacco Settlement money in 2020. The trauma care network commission, which is included in the department’s budget, receives $16.7 million from the General Fund in 2020. The largest state-funded programs provide financial assistance to county health departments, aim to prevent the spread of infectious disease and provide treatment and health promotion services aimed at children and infants. The department’s 2020 budget represents a $10 million increase compared to 2019.

Georgia’s public health programs also receive significant federal support. Federal money accounts for 57 percent of the department’s $698 million budget in 2020, while state funding accounts for the rest. The federally funded Special Supplemental Nutrition Program for Women, Infants and Children, also known as WIC, makes up the bulk of the federal funds and more than a third of the department’s total budget for 2020. 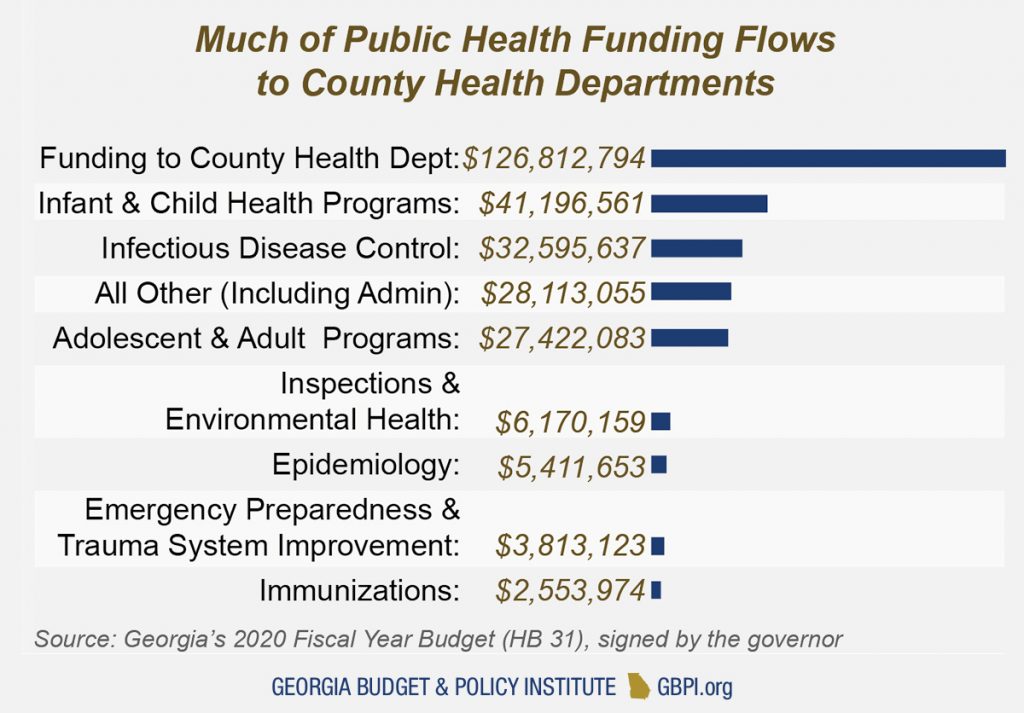