The Department of Community Health accounts for $3.4 billion or 71 percent of total state spending on health care. It operates Georgia’s Medicaid and PeachCare programs, conducts some planning and regulatory functions and administers the State Health Benefit Plan that provides health care to state employees and teachers. Funding for the state health plan comes from school districts, state agencies and their employees and retirees.

Georgia plans to spend about $1.1 billion, or 22 percent of Georgia’s 2021 health care expense, on behavioral health and developmental disabilities. This includes some services funded through Medicaid.

The Department of Public Health operates a variety of population-based programs such as immunizations, health screenings and infectious disease control. It receives $284 million, or about 5 percent of Georgia’s 2021 health spending.

Medicaid and PeachCare serve about two million Georgians, or one in five residents. The programs are important sources of health coverage for children, pregnant women, low-income seniors and people with physical and developmental disabilities.

Medicaid and PeachCare cover about 1.25 million children, or nearly half of all children in Georgia. Medicaid also pays for more than half of all births in Georgia. PeachCare is a separate program serving children from families with incomes above the Medicaid threshold, but who often lack access to employer-sponsored coverage. PeachCare is mostly funded by the federal Children’s Health Insurance Program (CHIP).

Medicaid is the main source of health coverage for Georgians with long-term health care needs, both in nursing homes and in community-based settings. Medicaid is the primary payer for three-fourths of nursing home patients in Georgia. Medicaid also helps pay Medicare premiums for more than 170,000 older Georgians.

Low-Income Medicaid serves children, pregnant women and some parents with very low incomes. The Aged, Blind and Disabled portion of the program serves the elderly and people with a qualifying disability. Most Medicaid enrollees qualify through the low-income program, but most of the spending is for elderly and disabled patients.

Georgia expects to spend $3.4 billion in state funds to serve the two million Georgians covered by Medicaid and PeachCare, a modest amount by national standards. Georgia’s spending per Medicaid enrollee ranked fifth lowest among the states, coming in at 32 percent below the national average in 2015, the most recent year with data available. Georgia ranked last in Medicaid spending per low-income resident in 2017.

Georgia’s rank by both measures illustrates the health and economic realities faced by much of its population. The state scores comparatively low in national health assessments. The uninsured rate in Georgia is the third-highest in the country, and Georgia ranked No. 11 out of all states for poverty rates in 2018, with an overall poverty rate of 14 percent and a child poverty rate of 20 percent.

A greater investment in Medicaid can allow the state to expand health services and increase the rates of reimbursement for health care providers. There was a 1 percent primary care rate increase in the 2021 budget, but the last significant increase in reimbursement for primary care and OB/GYN doctors was in the 2018 budget when lawmakers increased rates to 2014 Medicare levels. 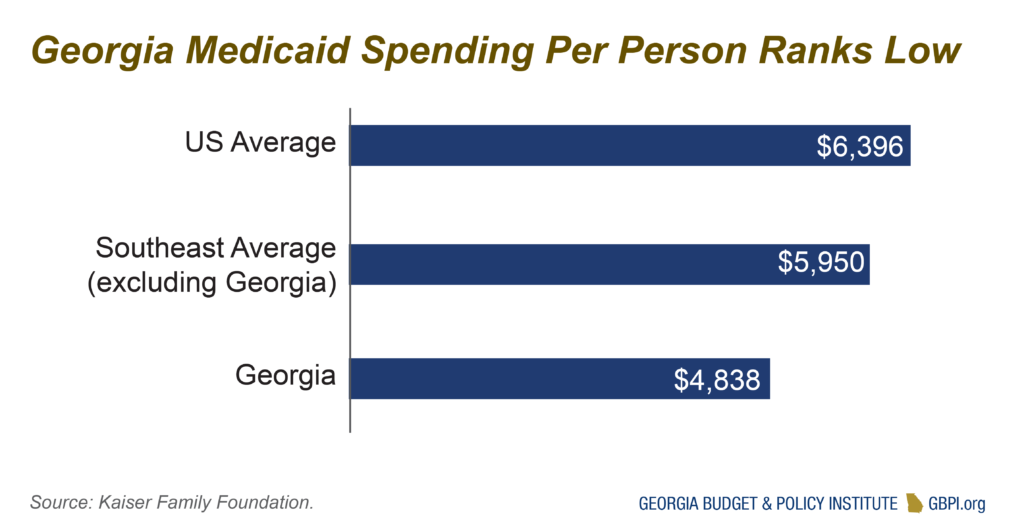 Black and Latinx Georgians face worse outcomes for many of these measures. Black women are three to four times more likely to die from pregnancy-related causes. The uninsured rate for Latinx Georgians is over 2.5 times higher than for white Georgians. These differences are the result of structural racism, showing the need for Georgia leaders to treat racism as a public health crisis and pursue solutions to undo these inequities.

The 2021 budget takes an important step to increase access to care and address maternal mortality disparities by including $20 million to allow new mothers to keep their Medicaid coverage for six months postpartum, rather than the two months previously allowed. This plan needs to be approved by the federal government.

Georgia can also increase health care access by expanding Medicaid coverage to over half a million Georgians, with 90 percent of the costs funded by the federal government. Rural Georgia counties, especially in southwest Georgia where many of the counties populations are largely Black, have higher uninsured rates and faced a higher proportion of COVID-19 cases and deaths. Rural residents and hospitals stand to benefit the most from expanding health coverage. 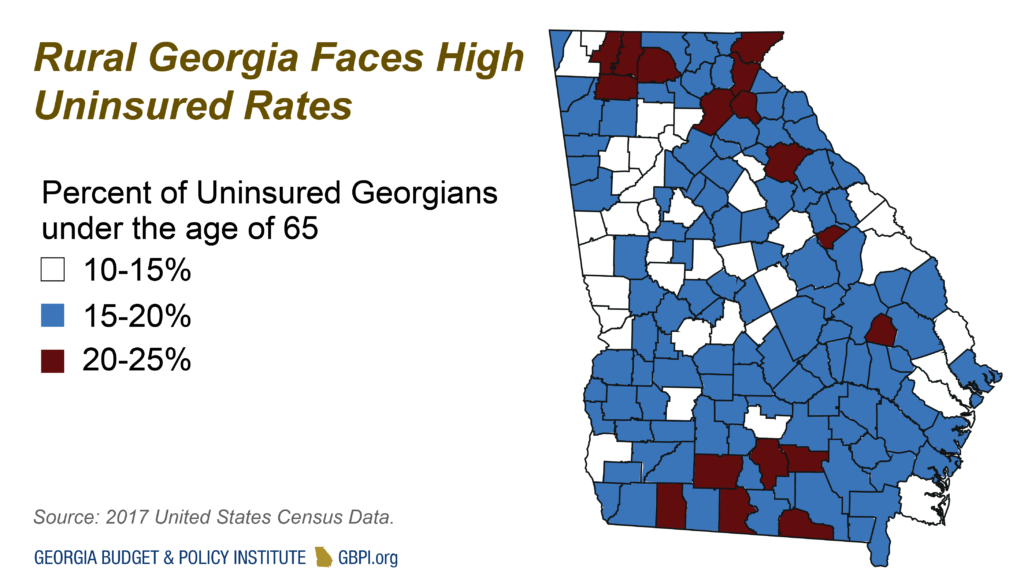 The Department of Behavioral Health and Developmental Disabilities (DBHDD) operates a variety of programs that serve Georgians with mental health needs, addiction and developmental disabilities. The department also operates programs for forensic evaluation and treatment for Georgians under court jurisdiction. DBHDD receives more than $1.1 billion in 2021 from the General Fund along with $10.3 million in Tobacco Funds, a combined decrease of $91.4 million compared to 2020.

Georgia entered into a legal settlement in 2010 with the U.S. Department of Justice that laid out a plan for the state to increase its mental health and developmental disability services in home or community settings relative to institutions. The state invested over $256 million new state dollars since 2011, including supportive housing for people moving out of institutions, strengthening the behavioral crisis response system and adding new community-based behavioral health services. 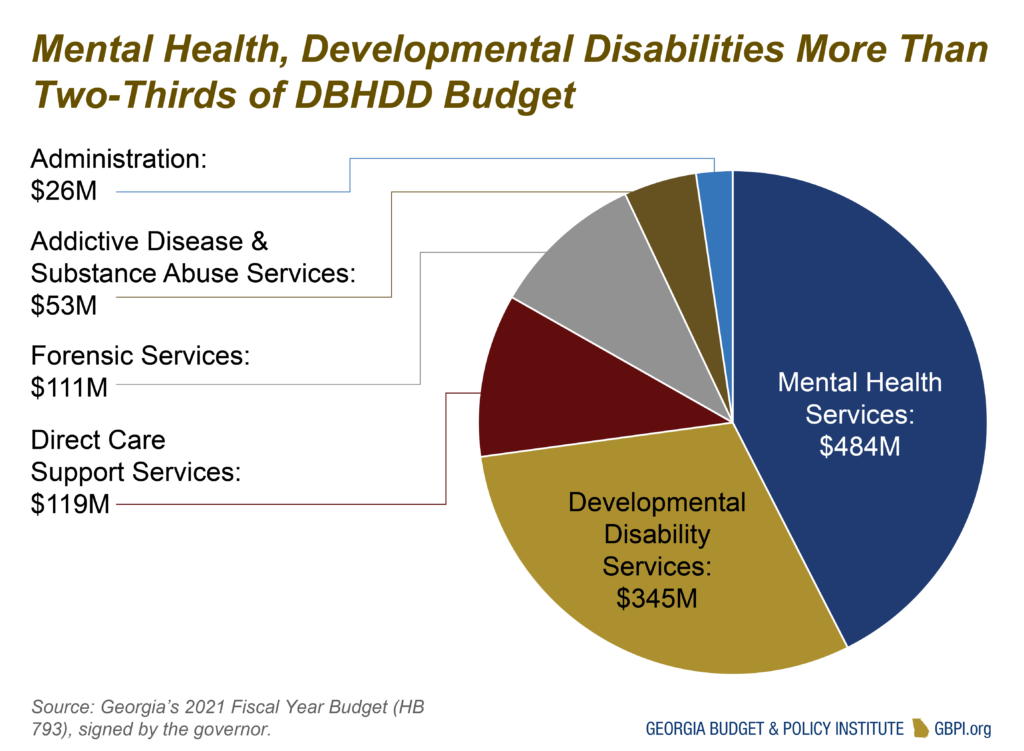 The Department of Public Health operates a variety of programs focused on health promotion, disease prevention and health-related disaster response and preparedness. The department receives $269 million from the General Fund and $13.7 million in Tobacco Settlement money in 2021. The Trauma Care Network Commission, which is included in the department’s budget, receives $14.4 million from the General Fund in 2021. The largest state-funded programs provide financial assistance to county health departments, aim to prevent the spread of infectious disease and provide treatment and health promotion services aimed at children and infants. The department’s 2021 budget decreased by $8.2 million compared to 2020. 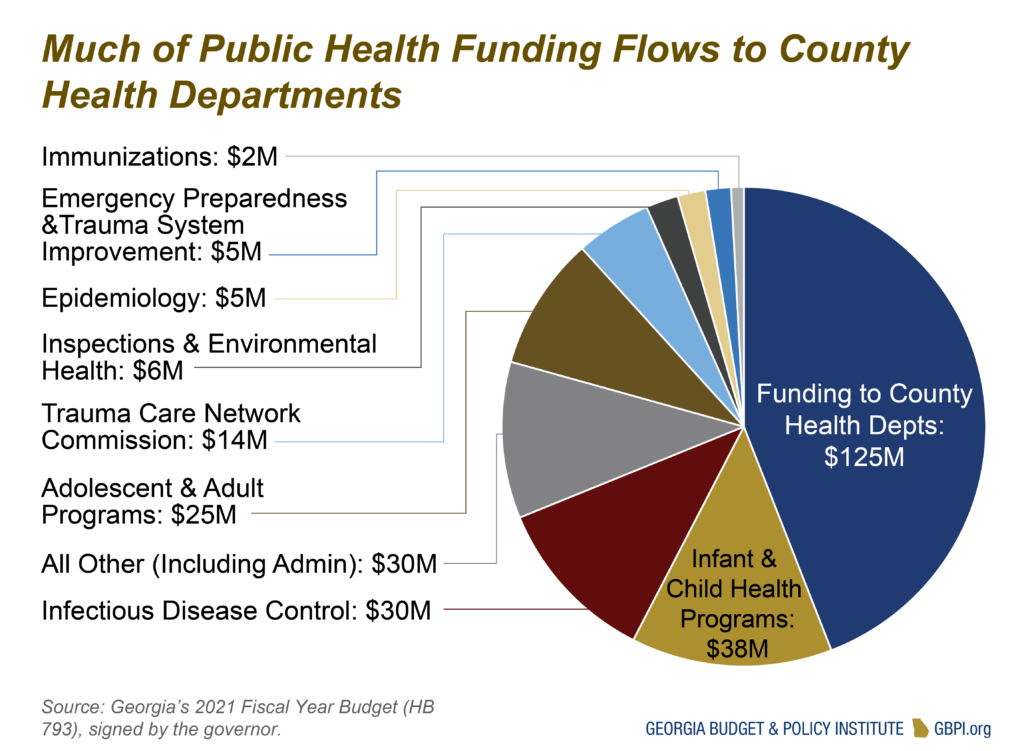 Governor Kemp declared Georgia’s first public health state of emergency on March 14, 2020. The amended 2020 budget that passed in March included $100 million from the state’s Revenue Shortfall Reserve to help the Georgia Emergency Management Agency (GEMA) and the Department of Public Health (DPH) in their COVID-19 response efforts. GEMA also received $54.5 million from the Governor’s Emergency Fund in its work to build treatment and testing capacity and distribute supplies to hospitals and health departments.

DPH and GEMA are leading the state’s response to the COVID-19 public health emergency and are tasked with preventing the spread of the virus. DPH aimed to hire nearly 1,000 contact tracers to assist in identifying and mitigating hotspots of the virus. DPH has also responded with additional services such as a COVID-19 Hotline for individuals to access health care if they suspect they are infected, an online monitoring tool and a state data dashboard to track the virus.

The Department of Community Health (DCH) is also helping with the response through changes to Medicaid. The agency submitted federal waivers to ease health care provider enrollment in Medicaid, expand the use of telehealth services and not require current enrollees to renew coverage or pay copayments during the emergency period. The department is also responsible for the oversight of nursing homes and is utilizing existing funds to track COVID-19 cases and deaths and study the impact of COVID-19 on the financial viability of these facilities. The Department of Behavioral Health and Disabilities (DBHDD) is tracking COVID-19 cases in the state’s five psychiatric hospitals.

Federal legislation in response to the COVID-19 national emergency allocated funds to states for several priorities such as education, unemployment insurance and health and human services. The health funding included money directly for hospitals and clinics and funding for the state’s health agencies. Some of the new federal funding for health agencies is outlined below. 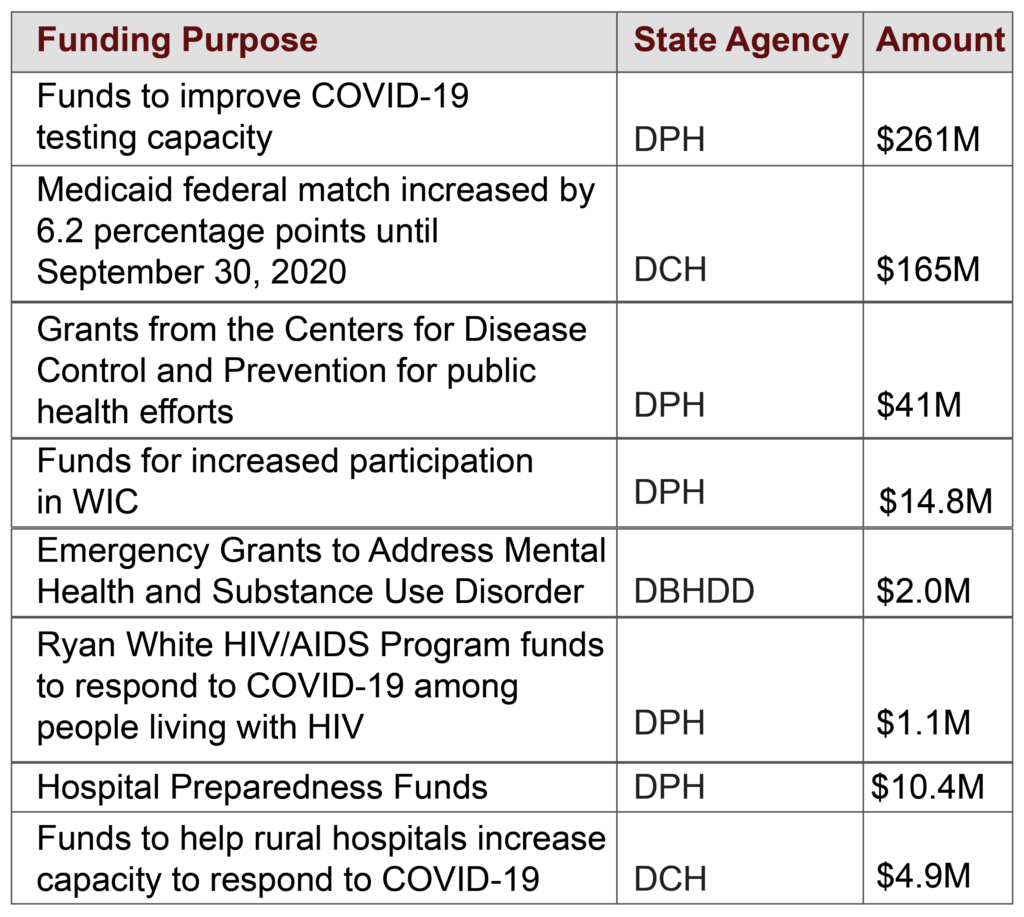