The higher education budget in Georgia is $2.4 billion for the university system and $369 million for technical colleges. The 2019 budget includes about $142 million of state general funds allotted for scholarship, loan and grant programs, including dual enrollment. The Legislature also appropriated $1.2 billion in lottery funds for education, including $367 million for Pre-Kindergarten and $834 million for higher education programs, including HOPE scholarships and grants. Lottery funds increased by $68 million. Lottery reserve funds total more than $1 billion.

The 2019 budget increases appropriations by $27 million to meet the projected increase in demand and cuts the $500,000 transportation grant. These changes equal a 33 percent net funding increase from last year, resulting in a final budget of $105 million. Dual enrollment funding more than doubled from 2016 to 2019.

Dual enrollment is paid for through general state funds. The 2019 budget includes the following policy changes:

The 2019 budget for the university system is $2.4 billion, or about 9 percent of the state’s general funds. Georgia allocates $2.2 billion to colleges and universities for student instruction, with the remaining $200 million for miscellaneous programs like the Georgia Cyber Innovation and Training Center. The state appropriates funds to the Board of Regents, which manages Georgia’s public university system and allocates money among its 28 colleges and universities.

This year’s budget represents a 4.8 percent increase in state funding per full-time equivalent student (FTE) from last year, assuming 1 percent growth in student enrollment. About half of the increase shores up the retirement benefit plan, and half is due to formula funding increases in enrollment and square footage.

The 2019 state budget for technical education is $326 million, representing an increase of less than 1 percent from last year. The technical college system includes 22 colleges throughout Georgia. Technical colleges provide a range of programs including associate’s degree, certificate and diploma programs.

In addition to the state’s general funds for higher education, Georgia appropriated $1.2 billion from lottery sales to fund the following education programs in 2019:

The biggest change in lottery funds spending from the previous year is a $65 million increase to boost HOPE scholarships in public colleges by 3 percent and meet projected need. Almost half of that increase, $30 million, is to meet the rising cost Zell Miller scholarships, which about 10 percent of eligible bachelor’s degree students receive.

The state appropriates more lottery dollars than it spends on Pre-K and HOPE programs. The unspent, or surplus, lottery money transfers to reserve funds managed by the State Treasury. In budget year 2017, more than $53 million in lottery surplus transferred to the reserves.

The state has two lottery reserve funds: the Lottery Shortfall Reserve and an unrestricted reserve. The Lottery Shortfall Reserve acts as a rainy day fund to make up for any future shortfalls in lottery revenue. If lottery ticket sales underperform and the amount used for education programs falls short of the appropriated amount, the shortfall reserve can bridge the funding gap. By law, the shortfall reserve must hold an amount equal to 50 percent of the previous year’s net lottery proceeds. The second unrestricted reserve fund is made up of surplus dollars in excess of the 50 percent requirement.

Since the state created the 50 percent requirement in 2011, lottery reserves continue to grow. In 2017, both the shortfall and unrestricted reserves held $549 million each, totaling more than $1 billion. 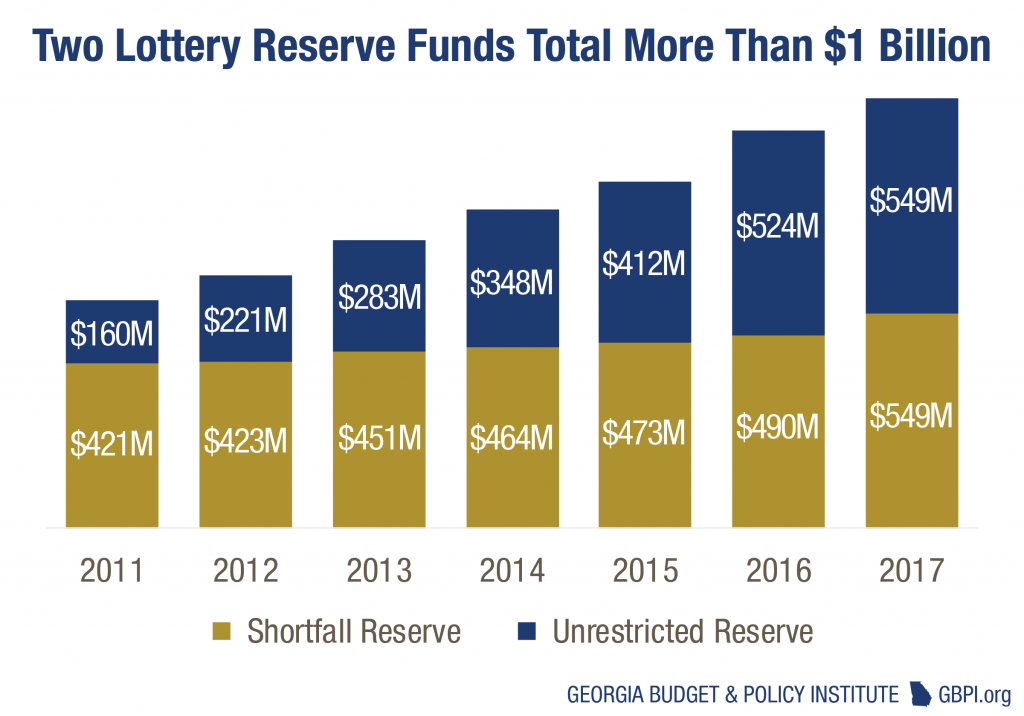 The vast majority (96 percent) of state scholarships, grants and loans are non-need-based. The 2019 budget includes $829 million for aid that does not consider financial need and $31 million that considers financial need in some way. Existing state-funded aid that considers need includes $26 million in loans and $5 million for the REACH program, which serves about 1,200 students.

Legislation passed in 2018 creates the state’s first broad need-based aid program in Georgia. The program is not funded in the 2019 budget, but future lawmakers will have the opportunity to fund the program and help more students go to college and complete their degrees.