Closing the Gap is Good for Georgia’s Economy

As new enrollees gain access to health coverage, the money spent on providing that coverage does not go into their pockets. Instead, these dollars go into the health care system and generate significant economic activity. Every one hospital job in Georgia creates two jobs in the surrounding community, according to the Georgia Hospital Association. 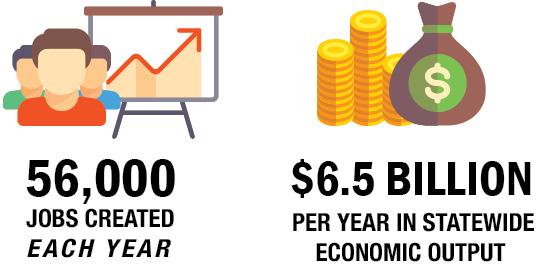 Georgia Can Afford an Investment to Close the Coverage Gap

Due to increased economic activity and the larger number of people with health insurance, revenue from sales taxes, income taxes and insurance premium taxes will rise. The four-year net cost to Georgia to close the coverage gap is $545 million (or $136 million a year on average).

Closing Coverage Gap Brings Billions of Dollars Back to Georgia

Georgians cannot afford another year of denying billions of federal dollars that could be coming back to the state. With the infusion of federal funds and the resulting increase in economic activity, closing the coverage gap is a good financial deal for Georgia. 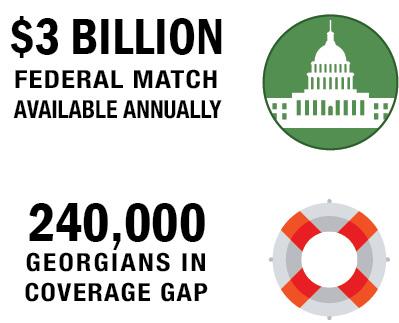 Closing the coverage gap will increase the number of insured people and provide new payment for hospitals, helping to reduce their uncompensated care costs. In 2015, Georgia hospitals absorbed more than $1.74 billion in costs for care that was delivered but not paid for, according to the Georgia Hospital Association.

The enhanced federal matching funds for closing the gap are also designed to help hospitals offset the reductions in federal Disproportionate Share Hospital payments.
Hospitals in other states benefited from reductions in uncompensated care as the number of uninsured declined through Medicaid expansion. 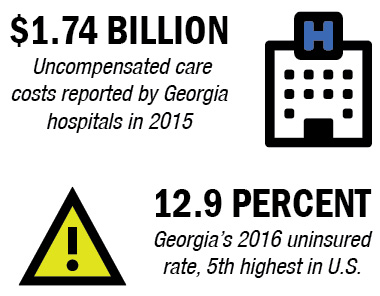 State treasuries also benefited from decreased uncompensated care according to research from the State Health Reform Assistance Network. States reduced spending on programs for the uninsured. Arkansas saved $17 million in state general fund costs from the decrease in uncompensated care in 2015.

Evidence From Other States Shows Closing Gap Is Good Investment

Examples of savings and revenue gains in other states from gaining enhanced federal matching funds to close the coverage gap.

A Strong and Stable Revenue Source
The federal match rate for Georgia has remained consistent since the program began in the 1960s. The rate adjusted to higher levels during times of economic downturn to help states manage higher Medicaid enrollment. Accepting the enhanced federal matching funds to close the coverage gap will bring a strong and stable revenue source to the state.