Across Georgia, people aspire to go to college. But students caught in the web of immigration laws and policies face daunting barriers. Many students who grew up in Georgia and lack a path to legal status must pay a much higher price for college. At the same time, they are barred from most loans, grants and scholarships.

About 59,000 Georgians ages 16 to 24 are undocumented according to the Migration Policy Institute, which is less than 5 percent of the state’s population in this age range. If these young people want to go to college, they will need to overcome the fact that they are:

Paying out-of-state tuition poses a large barrier for students, compounded by their lack of eligibility for state and federal aid. High costs put students at a greater risk that they will not graduate. Without access to loans, grants and in-state tuition, college is just too expensive for many undocumented students.

This is the situation Manny Diaz is in. He grew up in the small town of Baxley, Ga., where his family owns a farm. Diaz graduated third in his class from Appling County High School and attends Armstrong State University. Though he has lived in the U.S. since age two, he pays tuition and fees that are three times higher than his classmates with Georgia residency. To pay for his tuition, he works two jobs.

If Diaz grew up in Texas or Maryland, he could pay in-state tuition rates at public colleges there. Twenty-one states let resident undocumented students pay in-state tuition. These states include economic competitors such as Florida. They tend to have relatively large resident undocumented populations and higher levels of postsecondary attainment.

State percentages of adults with associate’s degree or higher 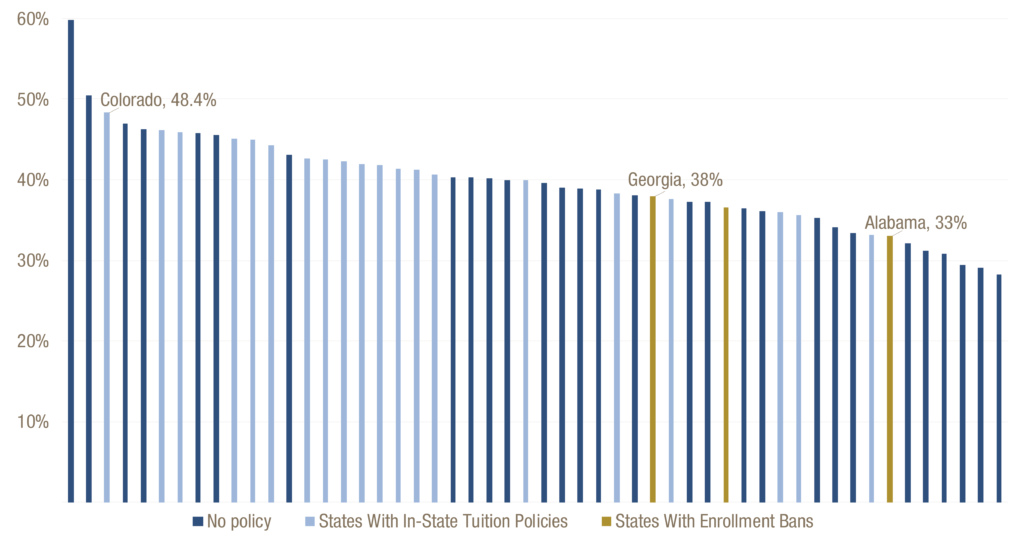 It is an open question whether students registered under Deferred Action for Childhood Arrivals (DACA) are eligible to pay in-state tuition in Georgia. They now pay out-of-state tuition. The program’s beneficiaries are people who immigrated to the U.S. as children, do not have felony convictions, and are in school, high school graduates or veterans. Until it ended earlier this year, the program offered work permits and protection from deportation. Its recent end creates more uncertainty for current and aspiring college students. But federal and state policies that bar undocumented students from enrolling in college and block access to loans, grants, scholarships and in-state tuition existed before DACA and will remain without additional action.

Creating barriers for students who want to go to college hinders the state’s competitiveness, undermines its Complete College Georgia goals, and weakens the workforce. Georgia ranks in the bottom third of states for adults with an associate’s degree or higher. The governor’s Complete College Georgia goals aim for an additional 250,000 graduates by 2025. Putting financial barriers in front of thousands of aspiring college students makes reaching the state’s graduation goals harder to reach.

Georgia lawmakers and others who oversee the state’s higher education policies can help these potential students build on the education they received in the state’s public schools by knocking down barriers that stand in the way of their graduation. Opening up access to college classrooms helps the state reach its graduation goals, advances Georgia’s educated workforce and helps students continue their education in a college classroom.