How Does Georgia Fund Schools?

The video above is narrated by Dr. Stephen Owens, GBPI Senior Policy Analyst. Below is a full transcript.

The decades-old law that dictates how the state of Georgia disperses money to schools sits at the heart of most education policy discussions in the state.

This video will answer the question, “How does Georgia Fund Schools?”

Georgia’s public schools are funded through a law passed in 1985 called The Quality Basic Education Act, or QBE. At its most basic, QBE takes the total number of students, and uses that number to decide how much to pay out for school employee salaries (known as direct instructional cost and indirect cost) and other expenses needed to run a school (known as categorical grants). Before sending that amount down to districts, QBE subtracts out what the state thinks each district should be paying on its own, called local fair share.

We’ll talk through each of those buckets here, but first it’s key to understand how QBE counts students. Twice a year, every school in the state counts the number of students present and notes what classes the students are in (think general ed, gifted, or special education). These programs are funded differently based on things like what the state believes the appropriate class size should be. To account for students in different programs, the state divides up the day, then combines the pieces based on the programs they are in. The result is titled full-time equivalent students, or FTEs. By counting FTEs, the state can find out how many teachers need to be paid.

Teachers’ salaries make up the bulk of the first bucket in the QBE formula: direct instructional cost.

Each year, Georgia’s general assembly comes up with a base dollar amount to fund for each student. In 2019 it was $2,620.77. Every program that the state of Georgia pays for is given a “weight.” When QBE was created, it was decided that general education high school students are the least expensive to educate and assigned them a weight of one. Middle school, by comparison, is weighted slightly higher. At its most basic, if you had 100 high schoolers and 100 middle schoolers, after multiplying by each of the weights and the base amount, the middle school would be given just under 300 thousand dollars while the high school would get 262 thousand. Once school systems replicate this process for each program, the final dollar amount is how much each should be given for direct instructional cost.

The next bucket is indirect cost. These are things that affect the students but aren’t the classroom teachers. Think libraries, school maintenance and salaries for principals. The funds for these positions are tied to the number of schools within the system and the number of FTEs in those schools.

Here’s what this looks like in practice for Fayette County in the 2018/19 school year. 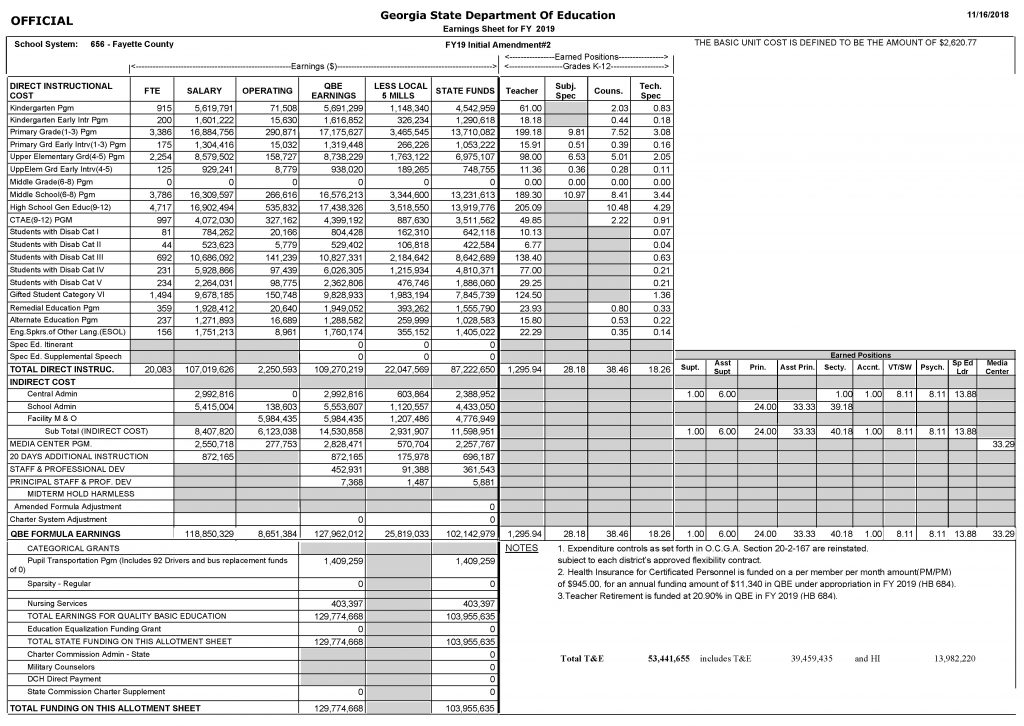 You can see the calculation for direct instructional cost and indirect cost. At the bottom of these two buckets is the QBE formula earnings. Although the state says that Fayette County Public Schools needs 128 million dollars for these costs, this is not the amount the district will receive. To understand why, it’s important to look back over 30 years.
Before QBE, it was local taxes, not state money, that paid the most for schools. When QBE was being created, there was a fear that some local districts would just stop paying for schools altogether and make the state pay for everything. So, lawmakers built in the requirement that each school system taxes their district five mills, or five dollars for every 1000 dollars of property value. This is known as local fair share… or required local effort… or five mill share… it’s got a lot of names. So before the state sends down all the dollars needed to run a school system, it deducts the local fair share.
After the calculation of indirect and direct educational costs and the subtraction of the local fair share, the state provides the fourth bucket: categorical grants. These grants are for services such as paying school nurses, or sparsity which help smaller districts pay for fixed overhead costs like air conditioning. School bus transportation is also funded through categorical grants, although the state has paid a significantly lower percentage of the cost since 1991, when it paid over half. 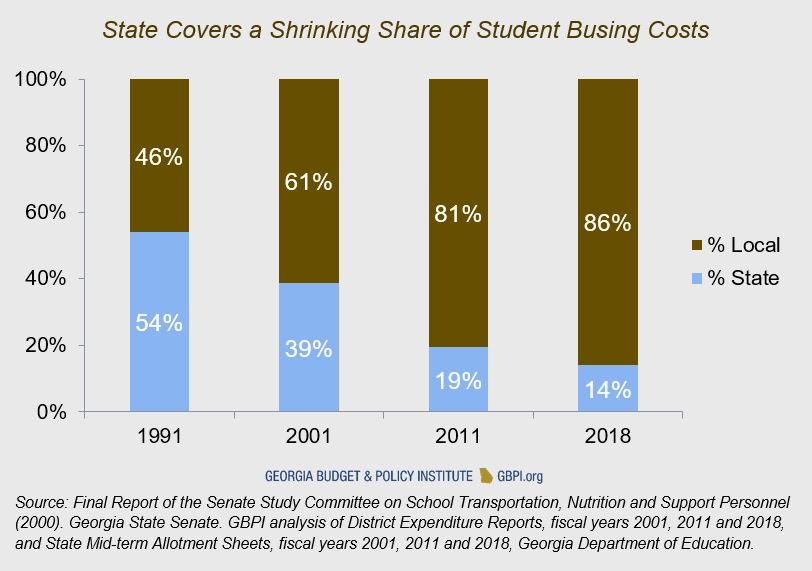 There’s much more to QBE, but that’s the basics of how Georgia funds schools. The Quality Basic Education Act was ahead of its time, but that was a long time ago. By reference you’re watching an online video about a formula that was written when less than 10% of all houses in the U.S. even had a computer. The same basic formula that dictated where over $9.6 billion went in 2019.

2 thoughts on “How Does Georgia Fund Schools?”