State leaders have called for across-the-board budget cuts to education, health care and every other program and service Georgians need. To avert cuts to services funded through the state general funds, like K-12 education, lawmakers should raise revenues. Some programs, such as HOPE and pre-K, are funded by the lottery. Lottery revenues are not likely to fall much, yet state leaders still proposed deep and damaging cuts to pre-K.

Agency proposals included cuts to pre-K that would eliminate 4,000 slots. The Senate Appropriations Committee voted to restore these cuts and keep pre-K whole. However, this restoration of cuts will not be finalized until the full Senate and House vote to approve the same version and the governor signs the budget into law. Lawmakers and the governor should maintain pre-K funding to support Georgia’s youngest learners and their families.

Eliminating Classrooms Would Fall Most Heavily on Black Children and Families 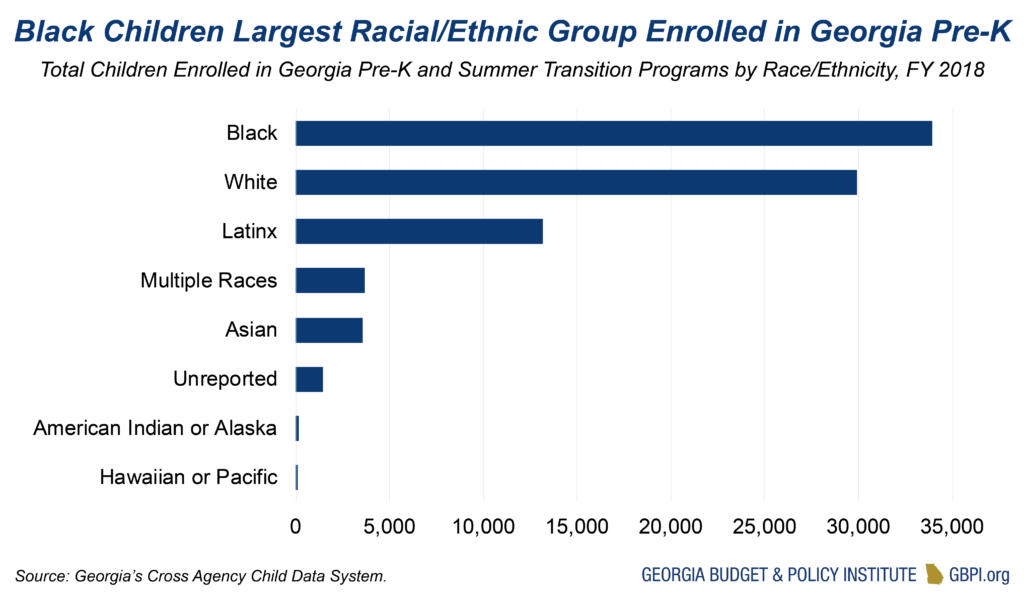 Pre-K Funding Not Facing a Shortfall

Cuts to pre-K classrooms are not strategic and ignore its funding reality. Pre-K funding comes solely from lottery ticket sales. In AFY 2020, Pre-K is funded at $387 million in lottery funds. Most other state programs, such as K-12 schools, receive funding from state general funds, which come from state income and sales taxes. In FY 2020, K12 education is funded at $10.6 billion in general funds. Some K-12 districts also get funding from the federal government, and all districts also receive local property tax revenues. Because COVID-19’s effects led to revenue shortfalls, lawmakers must find new options to raise revenues in order to adequately fund K-12 education.

However, different dynamics in lottery funds make pre-K cuts unnecessary. Historically, lottery ticket sales remain relatively stable during economic downturns. In 2011, lottery ticket sales decreased by 2 percent, the largest decrease since 2001. Currently, the lottery projects a slight decrease for the budget year ending June 2020 due to a sales dip in March, but reports that sales grew again in April. Pre-K costs are predictable through the year, and funding changes infrequently from appropriations bills to amended budgets.

Lawmakers’ past policy decisions put pre-K in a strong position to weather potential temporary decreases in ticket sales. Georgia has saved more than $1.2 billion in unspent lottery reserves that must be used for education. Reserves dedicated to HOPE shortfalls are legally mandated at 50 percent of prior-year lottery proceeds and stands at $572 million. Right now, lawmakers can use $706 million in excess reserves for pre-K, more than twice the total cost of the pre-K program.

In addition, several policy changes put Georgia’s lottery-funded programs in a much stronger position than the last recession. The current HOPE shortfall requirement is five times higher than the original requirement. Today, most HOPE spending does not increase automatically with tuition rates; it is set every year by the state. And the university system announced no tuition increases for 2020-2021, eliminating any pressure on lottery funds due to tuition increases. 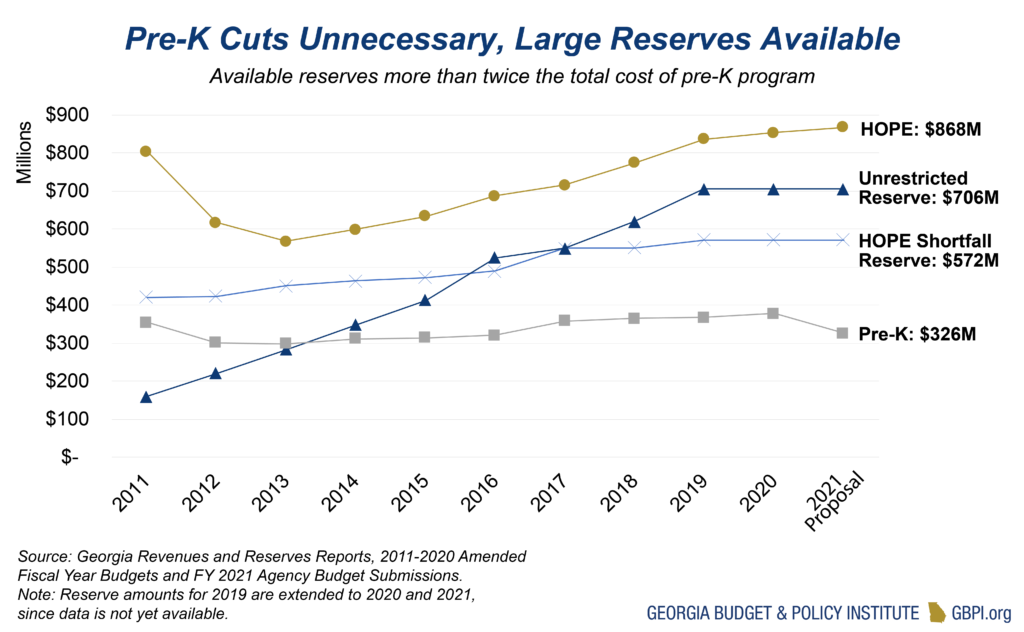