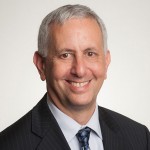 Georgia’s surplus from the 2013 is relatively small, as it turns out, slightly rebuilding the state’s reserves, while doing nothing to free up additional money for next year’s budget. That is the key take away from the State Accounting Office’s final report showing the official 2013 revenue surplus and the preliminary numbers for the Revenue Shortfall Reserve, or “rainy day fund.

At the end of the 2013 fiscal year, Georgia showed a $302 million revenue surplus.  By law, all of that money is deposited in the rainy day fund, which increases it to $682 million. Although the state agency surplus of unspent, or lapsed funds, is yet to be calculated by the state auditor, I expect the total will be in the $50 to $100 million range. That will mean a state reserves somewhere between $730 million and $780 million heading into the 2014 legislative session in January.

Up to $183 million of the reserve fund can be appropriated when the Legislature amends the 2014 budget next year. But the money can only be used to pay for increased K-12 education needs, basically paying for student growth not accounted for when lawmakers developed the budget last March.  Assuming the governor includes all $183 million in his amended 2014 budget revenue estimate, the reserve fund balance will settle between $550 million and $600 million.

Even with the additional money, Georgia’s reserves are still relatively low in the context of a $19.9 billion state budget. In 2002, reserves were enough to cover about 18 days of state operations. Before the 2007 recession the rainy day fund could cover 30 days of state expenses. Georgia’s current reserves can only run the state for 12 days. The lower the level of reserves, the larger the budget cuts to education and health care when the inevitable next recession happens. 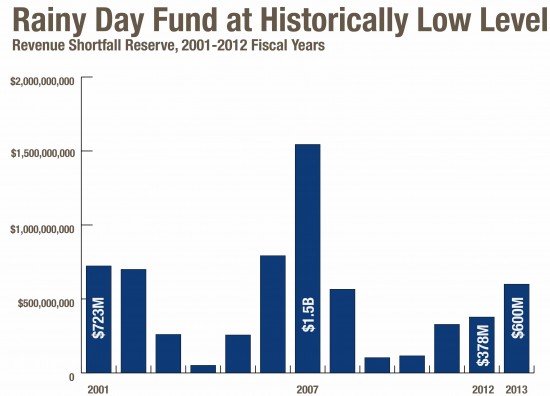 A healthy reserve fund is important for Georgia to maintain its AAA bond rating, which allows the state to obtain the best interest rates when it sells bonds. Low rates save the state tens of millions of dollars.  The main purpose of maintaining a rainy day fund is to sustain state services during tough economic times.

It is important to remember that the General Assembly cannot appropriate funds to build reserves. The only way to increase the Revenue Shortfall Reserve is through an end of the year surplus, which is automatically transferred to it by the State Auditor. A surplus should be part of an overall fiscal plan of the state as the governor develops his revenue estimates for the 2014 and 2015 fiscal years. The more conservative the revenue estimate, the bigger the potential end of the year surplus. This dynamic should limit the governor’s options as he develops the 2015 fiscal year budget.

The status and importance of the state’s reserves needs to be considered as tax policy changes are weighed during the upcoming session of the General Assembly. To be sure, election year tax cuts will subtract money available for education, healthcare, and public safety. But ax legislation that decreases state revenues in the 2014 and 2015 fiscal years will also damage the health of the state’s rainy day fund.

The latest snapshot of the state’s reserves is another sign of the revenue problems Georgia still faces.  The revenue structure combines with modest revenue growth to leave the state unable to meet the basic needs of Georgians. One billion dollars in formula cuts to education are assumed as a given each year. Basic health, safety and regulatory functions of state government have been cut to the bone and are now accepted as permanent. On top of that, the state needs to rebuild its financial cushion before the next recession hits.

These are compelling reasons for an honest discussion of ways Georgia will address the revenue needs of the state and how to reform the tax system to get the state on the right path.