Overview: 2023 Fiscal Year Budget for the Georgia Department of Corrections

For Fiscal Year (FY) 2023, Gov. Brian Kemp proposed a $1.27 billion budget for the Georgia Department of Corrections (GDC), an agency charged with overseeing the state’s prison system. Furthermore, as part of a dual-agency operation to purchase and construct new state prison facilities, he proposed an additional $167.7 million for the Georgia Building Authority to manage GDC facility acquisition and construction, leading to a total budget of $1.44 billion in FY 2023. From 1997 to 2007, Georgia’s tough-on-crime policies impacted the growth of GDC’s population and increased expenditures by $335.2 million annually.[1] Signaling a return to a similar policy approach, the latest budget proposals for the upcoming fiscal year and amended current year seek to more than double that previous ten-year period of expenditure increases.

Following Gov. Nathan Deal’s criminal justice reform efforts in 2012, a series of major legislative, programmatic and agency changes were implemented. These shifts were designed to reduce the length of incarceration while also expanding probation and parole eligibility. In May 2021, GDC reported a prison population totaling 42,795, a 23 percent decline since December 2019, following a modest population decline from 2012 to 2019.[2],[3] The prison population’s substantial decline up to mid-2021 is partially credited to measures taken in response to COVID-19, including increases in early releases coupled with a decline in crime and arrest rates. Since May 2021, GDC’s prison population has grown by 7 percent, as GDC reported a population of 45,592 as of January 28, 2022.[4] This recent population growth is a result of increases in two of the state prison system’s subpopulations: those in county and private prisons.[5]

While representing only 32.6 percent of Georgia’s population, Black Georgians make up 59 percent of the GDC’s prison population.[6] Georgia’s legacy of slavery, segregation, Jim Crow, racialized criminalization and punishment through over-policing in communities of color, racially biased punishment within school systems and historic disinvestments in communities of color have all contributed to the disproportionate representation of the state’s Black residents in prison.[7] To reverse these inequities and disparate impacts, budget makers must make racial equity a key goal of budget policy.

The GDC is one of several agencies that have proposed major spending increases in FY 2023, changing course from operations under Gov. Kemp’s 4 and 6 percent budget reductions for Amended Fiscal Year (AFY) 2020 and FY 2021 respectively, and minor spending increases in FY 2022 that still left spending at $82.9 million dollars below that of FY 2020.[8] For FY 2023, the GDC has proposed spending increases that provide $5,000 cost-of-living adjustment (COLA) increases to full-time eligible staff; benefit increases for eligible staff and retirees; increases to per diem rates for private prisons; and funding for capital maintenance and repairs, technology projects and transportation hubs for existing state prison facilities. Overall, the GDC’s budget for FY 2023 totals $1.27 billion, which reflects a $59.3 million dollar increase compared to FY 2020 funding. Unique in comparison to recent fiscal years, however, are added spending proposals housed within the Georgia Building Authority (GBA) that seek to manage and utilize additional funds for upcoming GDC-specific operations.

Compared to FY 2020’s pre-pandemic levels, total spending in the proposal for the Georgia Department of Corrections and the GBA spending that will be used specifically for GDC facility projects amounts to an increase of more than $428 million, or 35 percent. Changes include:

Total spending for the Georgia Department of Corrections in the proposed FY 2023 budget would raise funding levels significantly above pre-pandemic levels, as it is $59.3 million above FY 2020 spending with the inclusion of funds proposed for the GBA that are specifically allotted for purchase and construction of new state prison facilities. Provisions include: 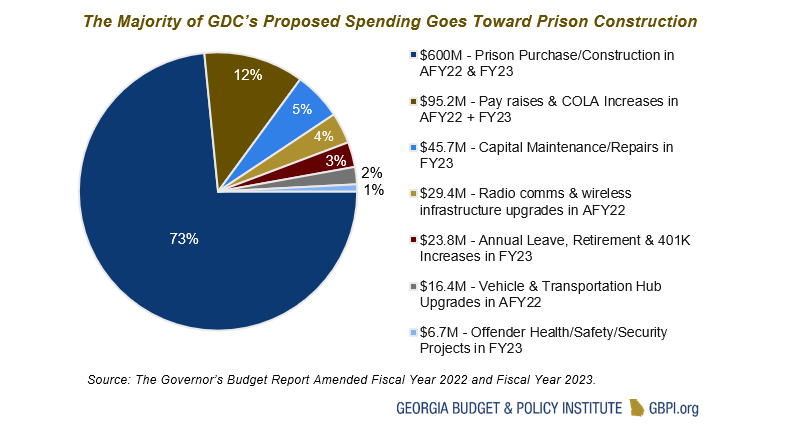 The FY 2023 budget significantly raises spending levels compared to those enacted in FY 2022, which to date has maintained significant spending reductions compared to pre-pandemic levels. Signaling a harmful shift towards heightened incarceration levels, the latest proposed spending leaves unanswered questions regarding how AFY 2022 and FY 2023 spending levels can provide long-term solutions to the ongoing humanitarian crisis in Georgia’s state prisons. FY 2023 proposals alone would be more than $142 million greater than FY 2022 spending and nearly $307 million more when combined with the Georgia Building Authority’s proposed prison construction spending. When the same FY 2023 combined spending proposals are compared to FY 2020 pre-pandemic levels, they are more than $227 million greater than FY 2020.

Furthermore, when combining the AFY 2022 and FY 2023 proposals across GDC and GBA, which covers general fund spending and bond financing for prison construction and general fund spending for staff and infrastructure upgrades, they account for more than $817 million in added spending compared to FY 2022. Despite nearly $1 billion in added spending, these priorities do not reduce the additional multi-million-dollar financial burden placed on incarcerated Georgians and the loved ones who support them. They carry the maintenance of a more than $5 million cut that was achieved in FY 2021 by increasing commissary prices for Georgians who are incarcerated. This will continue to make necessities, including hygiene products, much more difficult to access for those who are incarcerated, particularly in a prison humanitarian crisis worsened by the ongoing pandemic. They also fail to restore the $2.4 million cut in total health spending since FY 2020, which invites questions surrounding GDC’s priorities regarding inmate and prison staff health, including the relevance of these cuts to the discontinuation of inmate COVID data tracking; the unknown status of medical co-pay waivers for inmates with COVID-19 related health issues, which were initially granted in March 2020 but their continuation is unclear; and the overall reduction in public health transparency despite waves of multiple, threatening COVID-19 variants.[9]

Short-term prison system spending decisions continue to collide with the long-term need to comprehensively assess inmate population and health challenges. Such spending decisions often ignore the broader role of the criminal legal system in effectively addressing statewide crime challenges and driving the vicious cycles the system purports to interrupt. At this moment of comparatively elevated funding, the legislature has an opportunity to more holistically assess the state’s long-term carceral approach to such multi-faceted issues. A myopic approach, focused solely on punishment and occasionally magnifying racist tropes, will only heighten mass incarceration and worsen the collateral suffering that is disproportionately experienced by Georgians of color.