Any case for where a state needs to go must begin with a story of where it is, where things fall short and why a different path could prove better. Today, Georgia’s economy provides high profits and decent economic gains—to some. But the average Georgian is barely gaining ground, stuck in place or left out entirely. Lopsided economic growth and declining opportunity weakens communities and undermines the state’s trajectory. A few key points can pinpoint the gaps in today’s economy, show how it fails too many Georgians and highlight how a different approach can help more families, businesses and communities thrive.

It’s too hard for Georgians to get ahead.

Georgians today are working harder than ever yet struggling to succeed. It’s not due to lack of effort.[6] The simple reality is the American connection between hard work and economic reward is severed.

Nationwide, it’s harder than it once was for regular people to get ahead no matter how hard they try.[7] About 92 percent of Americans born in 1940 wound up making more in their careers than their parents, while only 50 percent born in 1980 can expect to do the same.[8] Things tend to be toughest in the South.[9] In Georgia, a child born to parents at the bottom of the income scale has an 8 percent chance at best of working her way into the upper class. More worrisome, that same child has only a 41 percent chance of just reaching the middle class.[10] That uneven path to prosperity not only breaks a fundamental promise of the American Dream, it’s bad for economic growth. Every Georgian blocked from success is a potential worker, entrepreneur, teacher or inventor whose talents are left on the sidelines.[11]

The lopsided gains are especially tilted to the top 1 percent, or a narrow sliver of investors, shareholders, CEOs and wealthy estates at the very top. An estimated 93 percent of all income growth in Georgia from 1979 to 2014 went to the wealthiest 1 percent, or households making more than about a half-million dollars a year today.[13]

Georgians Face Long Odds of Getting Ahead

A Georgia child born to parents at the bottom of the economic scale[14] has no more than a 41 percent chance of reaching the middle class[15], and just an 8 percent chance of reaching the top.[16] The likelihood of getting ahead is even lower in much of the state, especially rural areas. Less than 3 percent of low-income children around Albany, for example, will achieve the proverbial rags-to-riches American Dream. 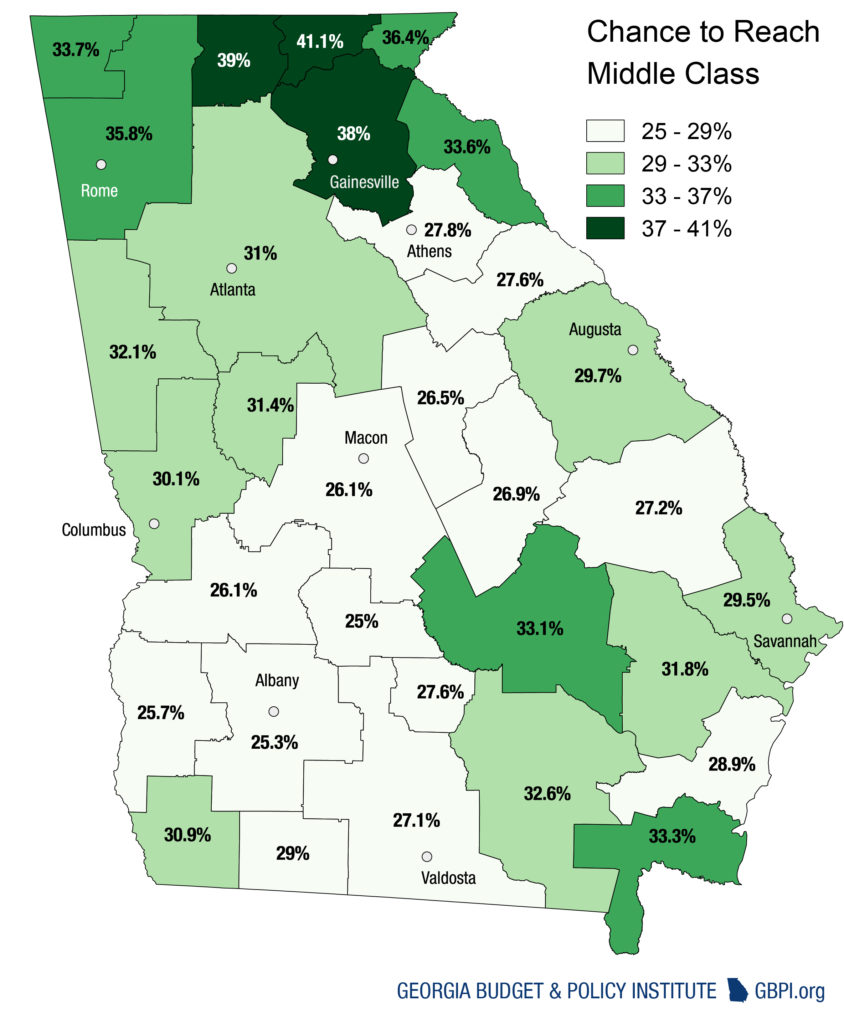 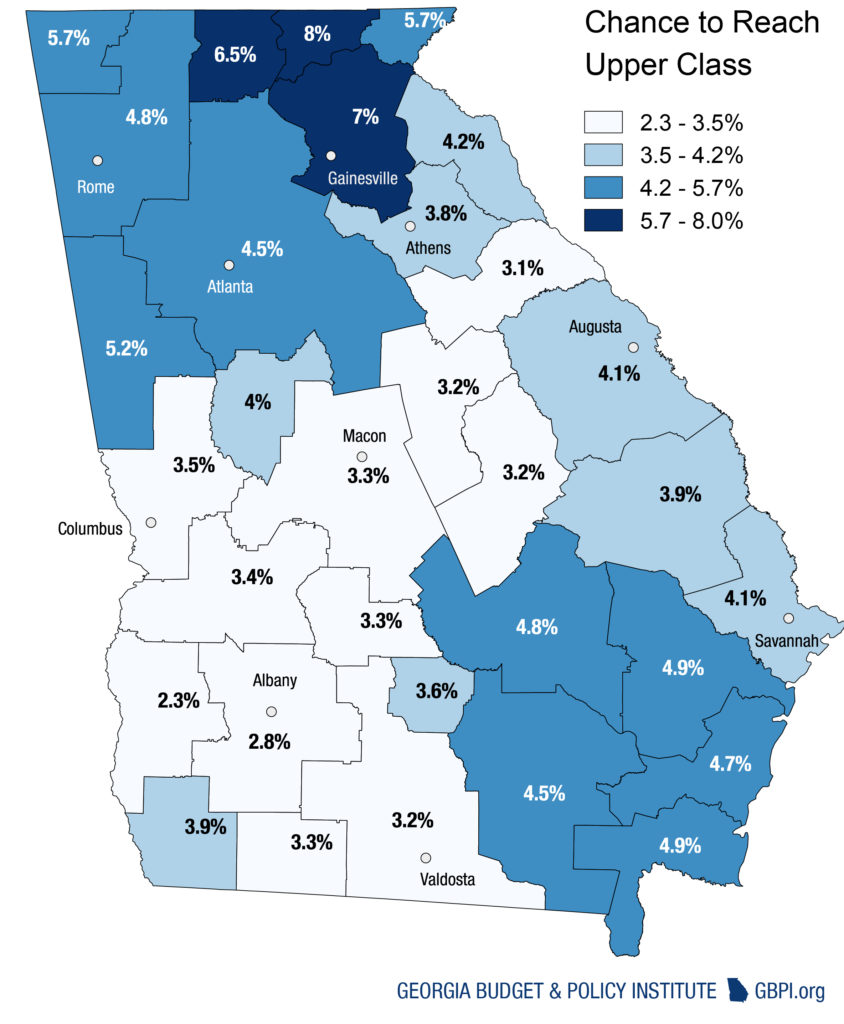 Middle-class Georgians are on shakier ground than their predecessors a generation ago. The leading cause is that wages—the primary source of income for the vast majority of families—remained mostly stagnant since the end of the 1970s.[17] Limit the range to the last 25 years and wages for a typical mid-wage worker in Georgia are up by only 10.4 percent, rising to $33,440 in 2016 from $30,280 in 1991. The bump was even smaller for low-wage workers trying to work their way up, just 6.7 percent over that span.[18]

Though better than nothing, that increase barely outpaces inflation and pales in comparison to rising costs. The average cost for public, four-year college tuition rose by 160 percent during that span nationwide[19], due in part to declining support for higher education in state budgets.[20] And the average cost of child care for U.S. families with working mothers rose by an estimated 70 percent from 1985 to 2011, according to the U.S. Census Bureau.[21]

These expenses can easily consume a family’s monthly cashflow. The costs of health care, child care, food and housing alone eat up about two thirds of the income needed to maintain a stable middle-class lifestyle.[22]

Things are even more of a challenge in recent years. In 2000, Georgia’s middle class brought home about as much in annual income as families in other states. But their earnings slipped soon after the millennium and then crashed during the Great Recession. Georgia’s median household income fell by nearly $8,000 from 2007 to 2011, steeper than the nation as a whole. As of 2016, middle class Georgians bring home about 7 percent less income than in 2000.[23]

Tight household budgets make it near impossible for middle class families to save. Only half of metro Atlanta residents hold enough liquid savings to cover a $400 unexpected expense,[24] and national data indicate the situation’s similar statewide.[25] That means thousands of Georgia families are one emergency away from disaster and lack the financial cushion to invest in pathways to upward mobility, such as going to college[26] or moving to a better neighborhood.[27]

With diminished chances of reaching the middle class and staying there, it’s no surprise Georgia suffers from an above average share of people in poverty.[28] About 23 percent of children in Georgia, 14 percent of working-age adults and 10 percent of seniors in 2016 struggled to get by, as measured by people who live below the federal poverty line.[29] That’s less than $12,000 for an individual or $24,250 for a family of four. Entrenched poverty holds back economic growth by weakening the productivity and spending power of adults and by undermining children’s ability to reach their potential down the road.

Adults living in poverty struggle to contribute as much as they could due to a range of related factors, such as lower levels of health[30], challenging caregiving responsibilities, unpredictable job schedules[31] and the psychological strain of poverty itself.[32] These constraints combine to make it harder for the working poor to stay in the labor force or increase earnings over time. Despite the challenges, an estimated 56 percent of Georgia families in poverty were working in 2015.[33] The harmful effects of poverty on the economy are especially strong when viewed in the long-run. Children growing up in poor households typically attend lower performing schools[34], get access to fewer mentors and enrichment activities[35] and are over-exposed to harmful factors including unstable family life, homelessness or environmental hazards like lead paint.[36] As a result, they are less likely to graduate college or enter the workforce and their earnings are lower as adults.[37] In Georgia, 44 percent of students from families that earn less than $35,000 per year graduate college within six years, compared to 69 percent of students from families above $75,000.[38] And nationwide only 60 percent of children from poor families are likely to be working by age 30, compared to 80 percent of those from middle class or high income families, according to one landmark study.[39]

Georgia’s economy underutilizes the talents of its increasingly diverse population.

Georgia gains enormous value and vibrancy from its status as one of the most diverse states in the country. People of color made up 45 percent of the state’s population in 2015 and might comprise a majority of Georgians by 2030.[42] Georgia is also now home to more than 1 million people born outside the United States. As of 2016, one in 10 Georgians was born in another country, versus one in every 37 in 1990.[43]

But Georgians of color face a steeper climb to realize their potential because of long-standing structural barriers. Georgia’s history of slavery, Jim Crow, exclusion of African Americans from mortgage loans[44] and jobs and decades of low investment in high-minority schools[45] casts a long social and economic shadow. Current barriers, such as subconscious bias among employers[46] and structural racism in the criminal justice system,[47] exacerbate the problem and cause Georgia’s racial income and wealth gaps to persist.[48]

Georgia women are also playing an increasing role, as they now comprise nearly half of Georgia’s workforce and are primary or co-breadwinners in a majority of homes.[49] Yet women continue to earn less money for similar work than men in the state, earning on average 70 cents on the dollar compared to white men.[50]

Racial and gender gaps, paired with hostility to immigrants, harm everyone. They equal fewer dollars for families to spend at local shops and restaurants, less money to buy homes or cars and less savings to put aside at local financial institutions. Structural barriers for women and minorities stifle the social and economic potential of the next generation, which might lack access to the same educational or entrepreneurial opportunities. And hostility to neighbors born outside the United States creates a society that’s simply meaner, less welcoming[51] and more unfair than our values demand.[52]

A lack of inclusion is also counterproductive to economic growth. Cutting-edge research finds regions with more racial and ethnic integration and more equitable economic outcomes tend to grow faster than places with entrenched racial divides or high inequality.[53] Georgia’s economy could grow by an estimated $12 billion[54] if it closed the racial employment gap and another $15 billion[55] if it closed the gender pay gap. Meanwhile, immigrants now account for 13 percent of Georgia’s workforce and 31 percent of Main Street business owners.[56] Georgia won’t prosper unless everyone living here can thrive.

The most prosperous states are anchored by an educated and healthy workforce and opportunities for people from all backgrounds to innovate and contribute. The following sections outline eight specific policy recommendations for ways that Georgia lawmakers can better invest in families and communities. An economy built on educated youth, skilled workers, thriving families and healthy communities can deliver wealth and opportunity for everyone by helping tap people’s economic potential at every stage of life. 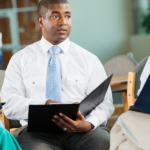