Last fall we published a report exploring the connection between Georgia’s legacy of slavery and Jim Crow and its impact on the educational opportunities and resources for students living in the state’s “Black Belt.” The Black Belt refers to a region of the state where slave labor was concentrated. Since 1865, Jim Crow segregation and myriad other state policies have exacerbated injustices in the schoolhouse that have produced stark consequences for the region. For a list of policies that can support the schools in this region, like targeted funding and investments in Pre-Kindergarten, the report can be found here.

However, in recent years state lawmakers have considered several policies that would make schooling in the Black Belt more difficult and less fair compared to the rest of the state. Lawmakers should reject the following policies if Georgia wants to provide a just, world-class public education system. Quotes from school leaders within the Black Belt have been included to give voice to the professionals that are impacted by state-level education policy decisions. 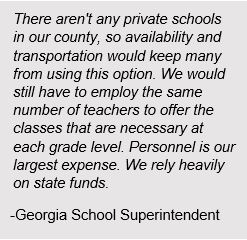 Also called education savings accounts (ESAs), 529 accounts and tax credits for education expenses, vouchers allow state funding to be used for private education expenses. These policies divert money meant for public schools to tax shelters and/or directly to unaccountable private schools. Evidence shows that students who take advantage of these policies nationwide are more likely to have lower test scores than if they had remained in the public school system.[1]

Vouchers are especially harmful in smaller districts where the loss of a few students would have an outsized effect on school budgets. Further, families who rely on school buses to get their children to and from the schoolhouse would be left out of any policies that promote private schools. This barrier alone helps to make vouchers unhelpful at best or hurtful at worst for the more than one million students who take a school bus annually. The students served in smaller, more sparse school districts are likely to see no benefit from a policy the benefits of which are unreliable. 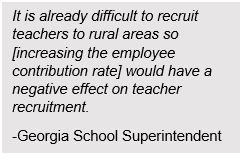 The Georgia General Assembly has debated several changes to the Teachers’ Retirement System of Georgia (TRS) that would increase the amount that school systems and/or individual teachers pay into the defined retirement benefit program. These changes would hurt low-wealth districts more than those other systems with higher property tax revenues as there is less local money to draw from. Similarly, district leaders in the Black Belt have expressed concern with any state law that would make it more difficult to recruit new teachers. With a state that contains school districts that range from a few hundred students to hundreds of thousands, state lawmakers must consider that not all districts can recruit new teachers easily. Policymakers must do all that they can to remove barriers so that every district can provide high quality teachers regardless of where they are in the state.

School districts serving higher proportions of students living in poverty are penalized when policies treat standardized test scores as the only measure of school quality. When state laws primarily rely on a test to decide governance and/or labels, the overall result is damage done to the public school system. School leaders and educators are not afraid of accountability but must be held accountable to a system that is transparent, consistent and measures elements the schools can control. Too many state laws and rules rely on test scores that act as little more than a proxy for community wealth. As the average school in Georgia’s Black Belt serves higher portions of low-income students than the rest of the state, over-reliance on test scores can lead to policymakers mistaking this region’s income for quality.

State lawmakers should reject unproven education policies in favor of research-backed investments in these schools and the communities they serve. Until they do so, many Georgians will continue to feel the painful effects of generations of disadvantage in the schoolhouse.