State of Working Georgia in the COVID-19 Crisis

Nearly two and a half months into the nationwide crisis responses to the COVID-19 pandemic, recent economic data continue to reveal the vulnerability of our nation’s workforce and how it turns to the unemployment insurance (UI) safety net. Georgia has begun reopening, considering options for austerity measures and awaiting potential federal action in hopes of lessening sharp cuts to its budget and the vital public services it funds.

While Georgia’s unprecedented peak of weekly unemployment claim totals may have approached a plateau, over 2 million Georgia workers have filed for unemployment since the President of the United States declared a national emergency on March 13.

From March to April, UI claims saw their largest spikes yet, across gender, race and ethnicity. The highest job losses come from workers in the Food and Accommodation Services industry, followed by Administrative Support/Waste Management/Remedial Services, Health Care/Social Assistance, Manufacturing and Retail Trade.

Per the latest GA Department of Labor report, Georgia’s unemployment rate is 11.9 percent, higher than any of its peak months during the Great Recession. While historic, this figure still may understate the true economic effects of social distancing barriers that could keep some laid off workers from looking for new jobs. With experts projecting unemployment to remain elevated into the second half of 2021, Georgia needs a policy strategy that ensures its UI safety net is accessible by all of its workforce and is inclusive of people of color, who have historically been left out of previous economic recovery efforts.

Note: (a) denotes that the unemployment rate was not included in the data set.

Unemployment filing trends across race during COVID-19 have begun to run parallel to those of the Great Recession: Black workers have been consistently overrepresented among unemployment claimants and filed the highest levels of claims during pre-COVID periods, while white workers now hold the highest levels of unemployment filings during what may be its peak. If safety net and workforce development policies are left at the status quo, workers of color and their white counterparts will once again share an uneven economic recovery. Georgia’s COVID recovery must not replay that trend. 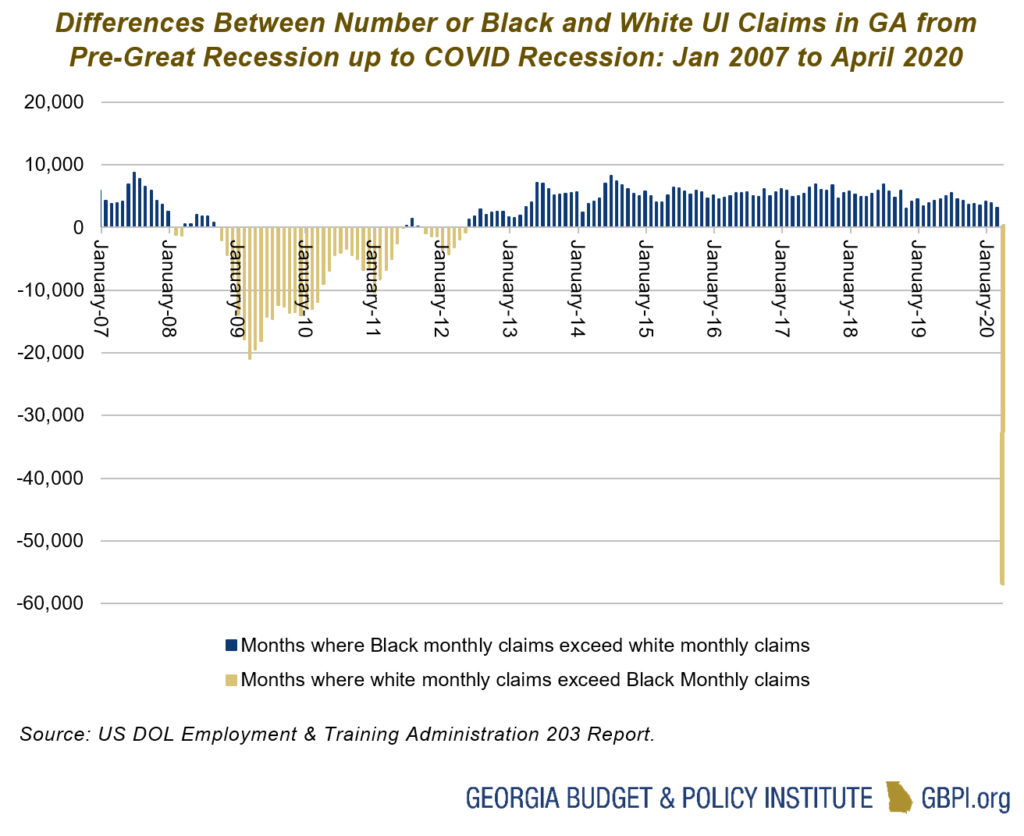 While the Pandemic Unemployment Assistance Program (PUA) within the CARES Act has provided unemployment benefit access to gig workers and independent contractors, it remains to be seen how unemployment benefit access will fare for Georgia’s underemployed workforce who take up gig work to supplement part-time, temporary, or inconsistent wages received during the COVID recession. During the Great Recession, “disqualifying or deductible income” issues in unemployment claims were flagged for review at nearly double the normal rate, and payments were denied or reduced nearly twice as often. Disqualifying or deductible income can include earnings, back pay, dismissal pay, workers compensation, holiday or vacation pay that can disqualify a full or partial amount of weekly unemployment payment. Laid off workers who were previously receiving part-time, temporary or inconsistent wages often struggle to qualify for unemployment insurance. 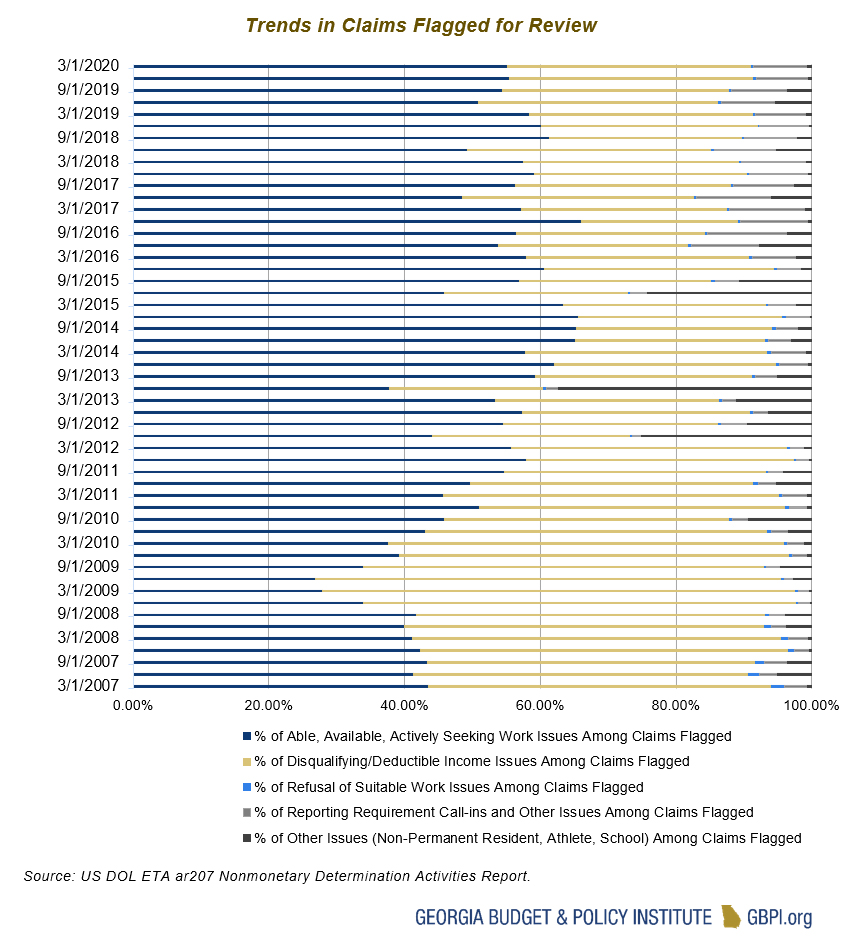 With heightened unemployment levels expected to remain in Georgia for some time, and a subsequently smaller state budget to fortify our safety net, policymakers must prioritize intentionally inclusive recovery strategies that provide an opportunity for all of Georgia’s workforce to find their way to economic prosperity.