Striving for Dignity and Mobility Through Work in Georgia

Just over 50 years ago, Dr. Martin Luther King, Jr. asserted that “all labor has dignity.” He delivered his sermon in solidarity with Memphis workers who were striking against poor working conditions and low pay in an era fraught with racist Jim Crow laws in the South. Fast forward to 2019, the fight continues as millions of workers across the country are organizing to demand dignity in work with safe and fair job conditions. Today in Georgia too many workers are struggling to find quality jobs that enforce the dignity that Dr. King spoke about – jobs that pay a family supporting wage, offer consistent schedules and provide benefits like health care and paid sick days.

In many ways, poor-quality jobs in Georgia is a policy choice with a long history, and state leaders play an outsized role. For example, state leaders support and recently expanded preemption laws that keep local communities from raising the minimum wage or mandating basic benefits such as paid family leave. Georgia’s minimum wage of $5.15 remains the lowest in the country[1], with 30 other states having a state minimum wage higher than the federal. The prevailing economic development policy for the state relies heavily on financial incentives to attract new businesses. In FY 2019, Georgia provided $8.8 billion in tax breaks to companies with little to no transparency or review.

Georgia enjoys the distinction of being the number one place to do business. Yet Georgia policymakers and business leaders have a key role to also make it a great place to live, work and raise a family.

Why does this matter today? Since the recession, recovery has been strong for some, but not everyone. The unemployment rate currently hovers low around four percent. However, when we disaggregate that data by race and ethnicity, black and Latinx unemployment rates remain twice that of their white counterparts. And for those who do overcome barriers and find work their wages have declined during the recovery period, which makes it increasingly difficult for working families to make ends meet despite being employed. Further, Georgia’s low-wage jobs are dominated by women and people of color who must navigate a labor market rife with gender and racial discrimination. 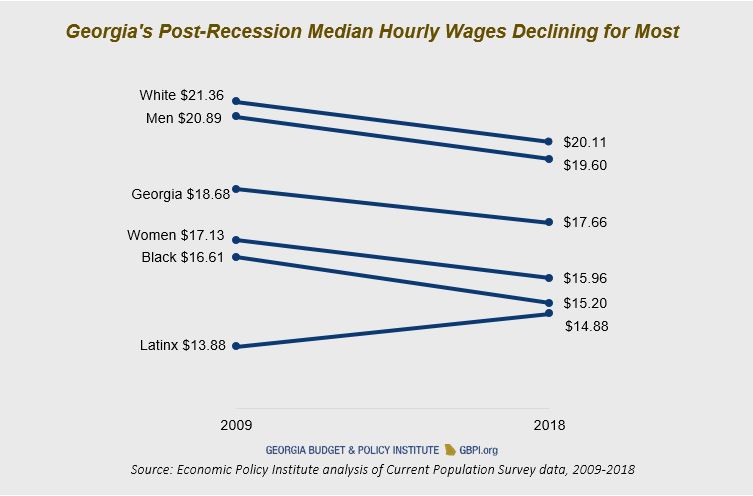 Out of all of Georgia’s working families, 33 percent make poverty wages, or about $40,000 annually for a family of four. About 190,000 Georgians juggle multiple low-wage jobs to keep the bills paid. Nearly one in five workers are uninsured, and an alarming 71 percent of workers paid low-wages in Georgia do not have an employer-paid pension. As a result, Georgians that work in low-wage jobs struggle to afford basic necessities, build savings and grow their wealth.[2]

We are currently in a tight labor market according the Georgia Department of Economic Development, meaning there are more jobs available than there are workers to fill them. But despite popular belief, Georgia businesses aren’t missing out on workers simply because the talent doesn’t exist. Pervasive barriers that block access to postsecondary training keeps talent out of the labor market. Disqualifying backgrounds fuel discrimination in a job search for Georgians coming out of the correctional system – the majority of whom are black men. Lack of affordable child care, unpredictable work schedules, limited transportation options and other factors also play a big role in keeping talent on the sidelines. Now is the time for policymakers and business leaders to collaborate to strengthen job quality and ensure all workers are supported to move up the economic ladder.

Policy must play a role in restoring dignity and mobility in work for people working in low-wage jobs and there are many solutions that get overlooked. For example, one opportunity is to better utilize and deploy resources available through the Workforce Innovation and Opportunity Act, or WIOA. WIOA requires states to fund services for individuals who face barriers to employment. State leaders can develop partnerships with “high road” employers and require local workforce agencies to partner with employers that offer wages above the industry standard, and offer fair scheduling policies and paid leave.

Businesses are a large part of the solution to improve economic stability for those working in low-wage jobs too. The National Fund for Workforce Solutions has developed a job quality framework to help businesses strengthen quality by offering access to employer-sponsored entry-level training, a full package of benefits for hourly workers including paid family leave, union organizing, and on-the-job guidance to help employees access child care assistance and the Earned Income Tax Credit (EITC). Business Leaders United (BLU) advocates for bigger investments in work-based learning so workers can move up the career ladder within their business and industry without leaving the job and taking on debt. A growing number of business leaders also recognize that higher wages give employees a strong incentive to stay and excel at a job, which reduces employee turnover and makes workplaces more efficient. As such, the coalition Businesses for a Fair Minimum Wage has organized the support of over 600 business owners, including 60 in Georgia, who want to see a higher minimum wage.

Not one person in an economy as large as Georgia’s should work without the confidence that they can make enough money and stay employed long enough to take care of their children, keep food on the table, pay the rent, or see a doctor on a routine basis. Many Georgia policymakers believe a low-income worker’s mobility can only be changed by hard work, but workers need the assurance that their labor guarantees them the opportunity to participate in the economy with fair wages and access to a system of assistance when needed. This is the path forward for lawmakers and business leaders to restore the dignity of work and affirm the humanity of our state’s greatest asset: our people.

[1] Georgia employers are required to pay the federal minimum wage of $7.25, unless exempt in the Fair Labor Standard Act