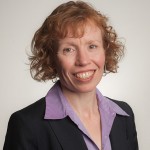 Georgia is investing far less in higher education today than it was five years ago, according to a new report.  As a result, students and their families are shouldering more of the cost of college than ever, leaving them with larger debt loads or pricing them out entirely even as the state is trying to get more Georgians to earn degrees.

The cost shift is a double blow to Georgia’s economy. It comes at a time when students and their families have shrinking resources to afford it and also coincides with an urgent need to improve the skills of Georgia’s workforce by increasing the number of students who complete college or technical school. Unless the state starts investing more in higher education, that goal will remain out of reach.

Georgia cut funding for higher education by 29.5 percent between fiscal years 2008 and 2013, the report by the Center on Budget and Policy Priorities shows. This means the state is spending about $3,000 less per student today in inflation-adjusted dollars than it did five year 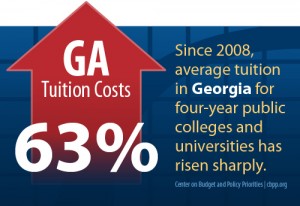 The university system dramatically raised tuition to offset the cuts. The average tuition at public four-year colleges in Georgia rose by 63.2 percent in inflation-adjusted dollars between 2008 and 2013, the report says. At some institutions, the increase was even greater. Tuition rose by 87 percent at the University of Georgia, by 89 percent at Georgia Tech and by 79 percent at both Valdosta State and Kennesaw State.

Changes the Georgia Legislature recently made to the HOPE financial aid program make it even more difficult for students to cover ballooning tuition. The HOPE scholarship covers about 87 percent of tuition and fees this school year. It once covered the total cost of tuition.

It would cover 90 percent of tuition during the next school year under the governor’s proposed budget. Long-term projections, however, indicate that HOPE will cover less each year. For example, the HOPE scholarship will cover only about 55 percent at the University of Georgia in 2018 if current trends continue.

Shifting more cost to students makes it harder for them to stay in school and graduate. As the center’s study notes, it can deter students from even entering a postsecondary program.

Georgia’s goal is to develop a highly-skilled work force to generate jobs and be more economically competitive. To that end, it is embracing Complete College Georgia, a program designed to help more of the state’s students graduate. For Georgia to reach its higher education goals, the state must restore funding for its colleges, universities and technical schools, even if that means developing new revenue sources. Some investments are worth making. This is one of them.