October is National Women’s Small Business Month, and Georgia has something to celebrate as the state with the second-highest growth rate of women-owned businesses in the country. Georgia is home to 522,200 women-owned firms employing 283,100 people and contributing roughly $56 billion to the economy, according to the 2018 State of Women-Owned Businesses Report by American Express. 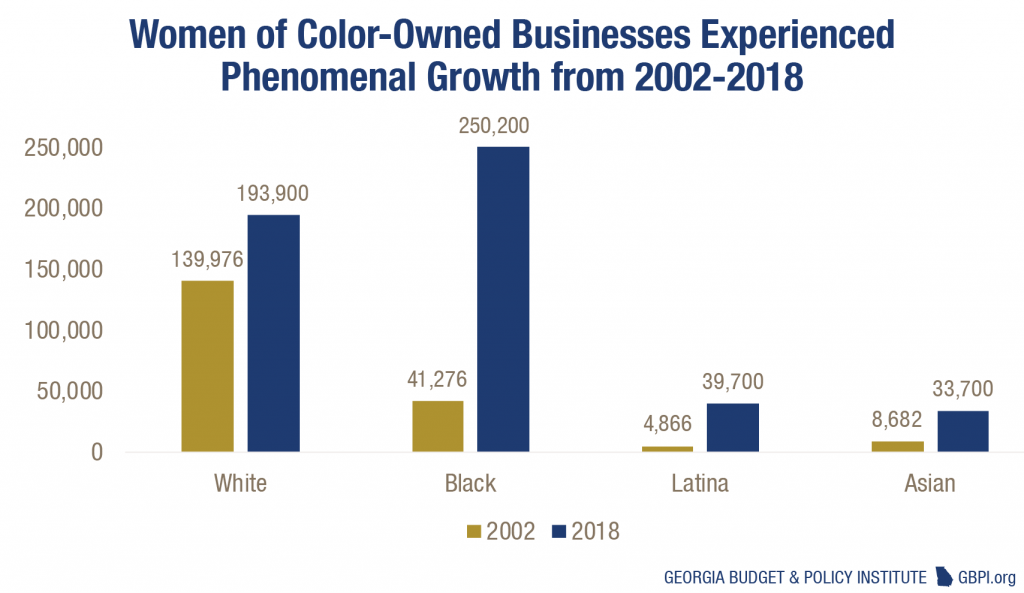 Despite the growth, trouble looms when it comes to women-owned companies’ ability to generate revenues and access startup capital. Women fall behind their male counterparts when it comes to generating revenues, and businesses owned by women of color tend to underperform those owned by white women. That limits the potential of women entrepreneurs to expand and create new jobs.

Only 5 percent of Georgia’s women-owned businesses report more than $250,000 in annual revenue, compared to 15 percent of men. And while women of color own more businesses than white women in Georgia, their revenues trail their white counterparts. Georgia’s white women business owners report an average of $198,000 in annual revenues, compared to just $22,000 for black women and $56,000 for Latina women. The new American Express report estimates that if revenues generated by firms owned by women of color matched those currently generated by all women-owned businesses, they would add four million new jobs and $1.2 trillion in revenues to the U.S. economy.

Access to capital is key to successful business ownership. The amount of startup money an entrepreneur has available for a business launch often determines its future success. Access to capital is an ongoing challenge for women entrepreneurs. Fewer than half of applications women business owners submitted for commercial business loans in 2016 were approved, according to the Federal Reserve Bank of New York and Kansas City. Women are often unable to tap capital due to harmful gender-based stereotypes, along with less consistent credit and income history as a result of job discrimination and wage inequality in the workforce.

Entrepreneurship is a powerful way for women to build wealth, and policies that help more women-owned businesses are a sound strategy to strengthen economic opportunity and close Georgia’s gender wealth divide. Given the rapid growth of women-owned businesses in the state, Georgia lawmakers can bolster individuals, families, and the state economy as a whole with smart and inclusive policies designed to help more women entrepreneurs thrive.