Based on the first quarter of the 2020 fiscal year, which began July 1, the state of Georgia faces mounting shortfalls in both income tax and sales tax collections, which make up nearly 80 percent of funding needed to operate our state government.

Under the budget enacted earlier this year, Georgia’s general fund revenue estimate of $26.1 billion for fiscal year 2020 calls for personal income tax collections to grow by $577 million (4.7 percent) over what the state collected last year and net sales tax revenues to increase by $275 million (4.4 percent). If growth were distributed equally across 12 months of the 2020 fiscal year, the state would currently stand $200 million short of its estimated revenue from these two sources, based on reported tax collections from July through September.[1] Last year, the first quarter of the fiscal year generated 24.6 percent of total income tax collections and 24.9 percent of sales tax—approximately one quarter of the total yearly collection for each tax.

To meet the 2020 estimate, personal income tax collections must grow by an average of 6.4 percent over the next 9 months and sales taxes by an average of 5.3 percent. Even if the full estimate is met, with only a 3.2 percent increase in total tax and fee collections over last year, 2020 would already rank as the slowest rate of growth since 2010—when revenues sharply declined during the Great Recession. Going into the second quarter of 2020, most other sources of state revenue are either flat or negative. 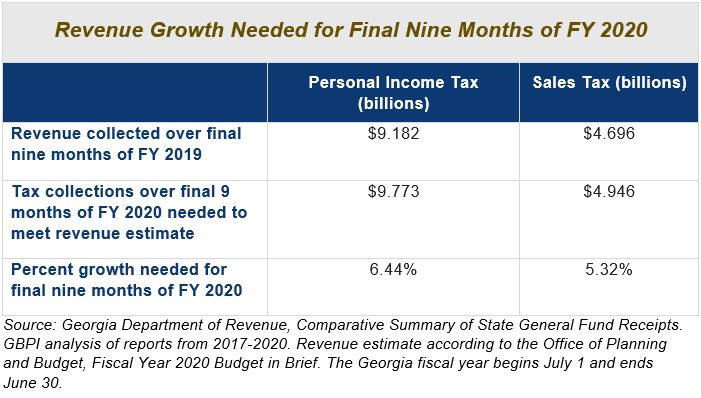 One out of every two dollars that funds Georgia’s state government is generated from the personal income tax, which for decades has served as the state’s largest and most dependable source of revenue. Through three months of the 2020 fiscal year, personal income tax collections are down 0.5 percent, returning $14 million less to the state than the Department of Revenue collected during the same time frame last year. Over the same three-month period last year, from fiscal years 2018 to 2019, personal income tax revenue collections increased by eight percent. 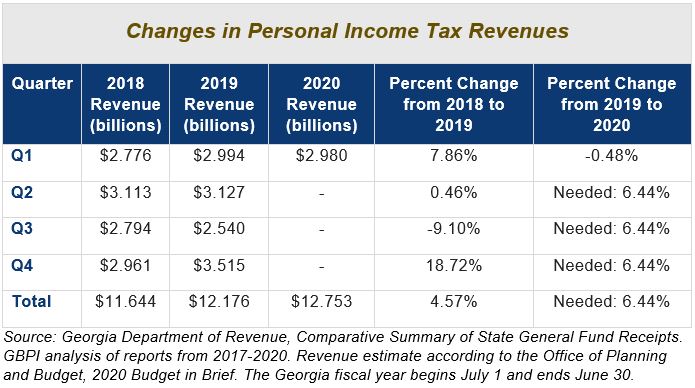 In part, Georgia’s lagging revenues can be explained by the fact that the state continues to experience high volatility in income tax collections due to the major policy changes initiated by the federal Tax Cuts and Jobs Act of 2017 (TCJA) and Georgia’s state response of 2018. The combined effects of these recently enacted federal and state policy changes substantially increased the percentage of Georgians filing their income taxes using the standard deduction from 69 percent to an estimated 86 percent of households.

State leaders also lowered the state’s top personal income tax rate for the first time since it was set at 6 percent in 1937, reducing it to 5.75 percent. In January 2019, the reduced top income tax rate took effect for both corporations and households through 2025. During the 2020 legislative session, lawmakers will also have the option to vote on a second reduction to the top income tax rate that would lower state revenues by an additional $550 million per year. However, with personal income tax collections already well below the current year revenue estimate, taking the unprecedented step of further reducing the state’s top income tax rate by an additional 4.3 percent would require significant trade-offs that are likely to outweigh the benefits for the vast majority of Georgia families. While middle-income households would gain an average tax savings of less than $5 per month, an additional quarter-point reduction in the top income tax rate to 5.5 percent would cost the state more than implementing a full Medicaid waiver to insure approximately 500,000 Georgians, increasing teacher pay by $3,000 per year or extending rural broadband to tens of thousands of families.

In September 2019, the state of Georgia experienced the first monthly decline in net sales tax revenues in over two years (since August 2017).[2] Declining sales tax revenues may signal a potential economic slowdown, which Georgia’s fiscal economist, Jeffrey Dorfman, warned of last month when he told state appropriations leaders there is a “50-50 chance” of a mild recession next year.[3]  Through three months of the 2020 fiscal year, net sales tax revenues are up 1.5 percent, well below the 4.4 percent annual growth estimated under the current year budget. Over the same time frame last year, sales tax revenues increased by seven percent. 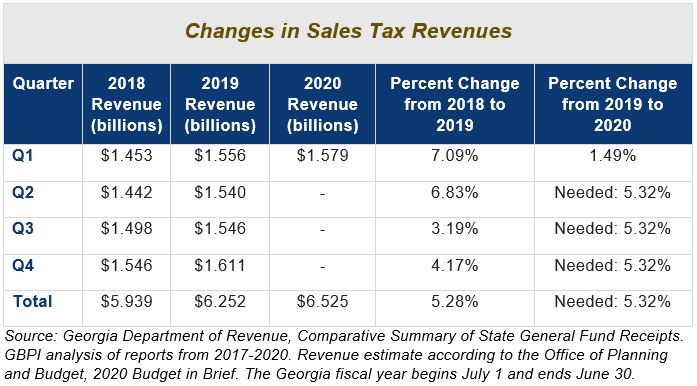 Weak sales tax growth can also be explained by the state’s continued trend of sales tax erosion, driven in part by online retailers and apps that do not collect and remit sales tax. Legislation that could help modernize the sales tax and close loopholes for online retailers is pending in the General Assembly. Other more minor sources of revenue also show negative year-over-year collections, such as the tobacco tax, which is down 6.7 percent through three months of FY 2020.

Although data has only been recorded for one quarter of the 2020 fiscal year, there is enough information available for state lawmakers to begin preparing for what will likely be a challenging budget cycle. The current revenue trends can also inform the ability of state leaders to better understand and observe the effects of recently implemented major tax changes. Although it is possible that the remaining nine months of the year will produce revenues that improve the state’s position, lawmakers should prepare for less optimistic scenarios.

In order to prevent long-term damage to the state’s fiscal position, Georgia’s leaders should continue to preserve the strength of our largest and most dependable source of revenue to ensure that if there is an economic downturn, our state will be in position to recover as quickly as possible. Similarly, although legislation was advanced in 2018 and 2019 to require some online retailers to collect sales tax, the state has not yet fully modernized its sales tax to keep up with changes in the economy. Georgia’s leaders must continue to maximize benefits from the state’s response to TCJA by further limiting inefficient tax breaks like the double deduction on state taxes and more closely evaluating the performance of costly tax expenditures and exemptions that have eroded the state’s sales tax.

Through one quarter of 2020, Georgia’s current year revenues not only lag the state’s own estimates but also trail most of the Southeast.[4] With hundreds of millions in budget cuts already under debate by state leaders, mounting shortfalls in revenue collections could wipe out much of the hard-won progress made in the decade since the Great Recession. Although the state has made significant headway in restoring its rainy-day fund to reach $3 billion, state leaders must maintain a balanced revenue system to meet the basic demands of funding state government. Looking ahead, lawmakers should continue to look for opportunities to invest in moving Georgia forward with common-sense revenue measures and reject a costly second cut to the top income tax rate that could threaten the long-term stability of the state’s finances.