A Flat Tax is Wrong for Georgia

Members of the Georgia General Assembly are considering legislation, HB 949 (LC 43 1624S), to change the structure of the state’s income tax in ways that would negatively affect hundreds of thousands of families across the state while threatening to upend the state budget by reducing revenue collections by $383 million per year when fully implemented. For the most part, Georgia taxpayers with annual incomes below $108,000 per year would not benefit—and may experience tax increases—as a result of the flat income tax structure created under the legislation. Overall, 88 percent of the $458 million in net tax cuts would go solely to filers earning over $108,000 per year. This fiscal impact is partially offset by $75 million in net tax increases that would be shared by 538,000 low- and middle-income households.

Overall, 88 percent of the $458 million in net tax cuts would go solely to filers earning over $108,000 per year. This fiscal impact is partially offset by $75 million in net tax increases that would be shared by 538,000 low- and middle-income households.

House Bill 949 would eliminate the state’s current graduated tax structure, in which tax rates increase from 1 to 5.75 percent as income levels go up, in favor of adopting a single, flat income tax rate of 5.375 percent. The legislation also creates a low, non-refundable income tax credit intended to help address widespread tax increases that result from raising the tax brackets of low- and middle-income filers to 5.375 percent. Additionally, HB 949 includes two other provisions: an annual update that brings the state into conformity with 2019 changes to federal itemized income tax deductions and an increase in the tax credit for adoptive parents of foster children. This analysis does not consider the effects of the federal conformity provisions, which the state’s fiscal note estimates will reduce revenues by $48.6 million in FY 2021, or the increase to the state’s existing foster-adoption credit, which state estimates project will reduce revenue collections by about $300,000 in FY 2021.

HB 949 also includes two additional revenue-raising provisions to help finance the $826 million in costs associated with setting a top income tax rate of 5.375 percent. The legislation raises taxes on households that currently take advantage of Georgia’s itemized deduction for state income taxes paid, increasing revenues by $130 million by raising taxes on about 543,000 households. Georgia remains an outlier in allowing filers to write-off state tax payments through a loophole that was adopted to mirror the federal State and Local Tax (SALT) deduction. Although state leaders should, in fact, eliminate this provision from the tax code, using the resulting revenues to almost exclusively cut taxes for top earners rather than fund state priorities does not represent a positive step forward. Finally, HB 949 also eliminates the state’s existing but small low-income tax credit, increasing state revenues by about $5 million. This unnecessary change further skews the legislation’s provisions to benefit top earners, while largely ignoring the negative effects on low- to middle-income families. 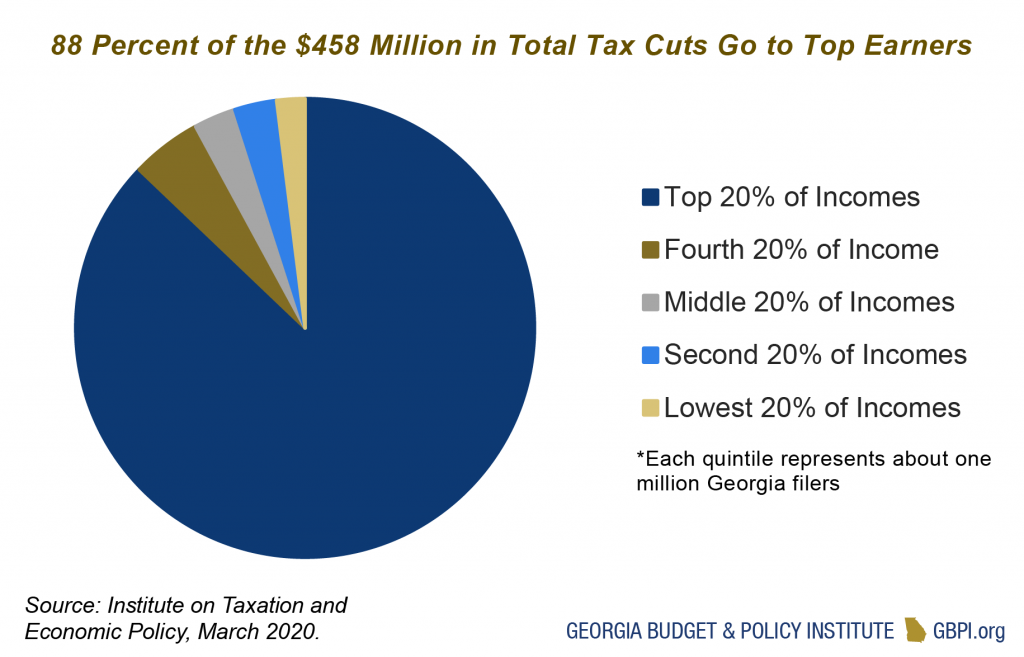 If enacted, the only Georgians who will see an average annual tax cut greater than $13 are those earning more than $108,000 per year, or those in the top 20 percent of earners. The largest share of net tax savings, 42 percent, will be shared by filers making more than $572,000 per year; the top 1 percent of income earners will, on average, benefit from a net tax cut of nearly $4,000 per year. Meanwhile, Georgians in the middle class—those earning between $38,000 to $108,000 per year—will pay an average of $5 more per year in taxes. Moreover, HB 949 would make a drastic structural change to how taxes are calculated as lower income tax payers are forced to pay higher rates without the benefit of the same level of itemized deductions that allow top earners to lower the amount of their income that would be applied to the state’s flat tax rate. This is in stark contrast to our current system, which taxes lower levels of income at a lower marginal tax rate. 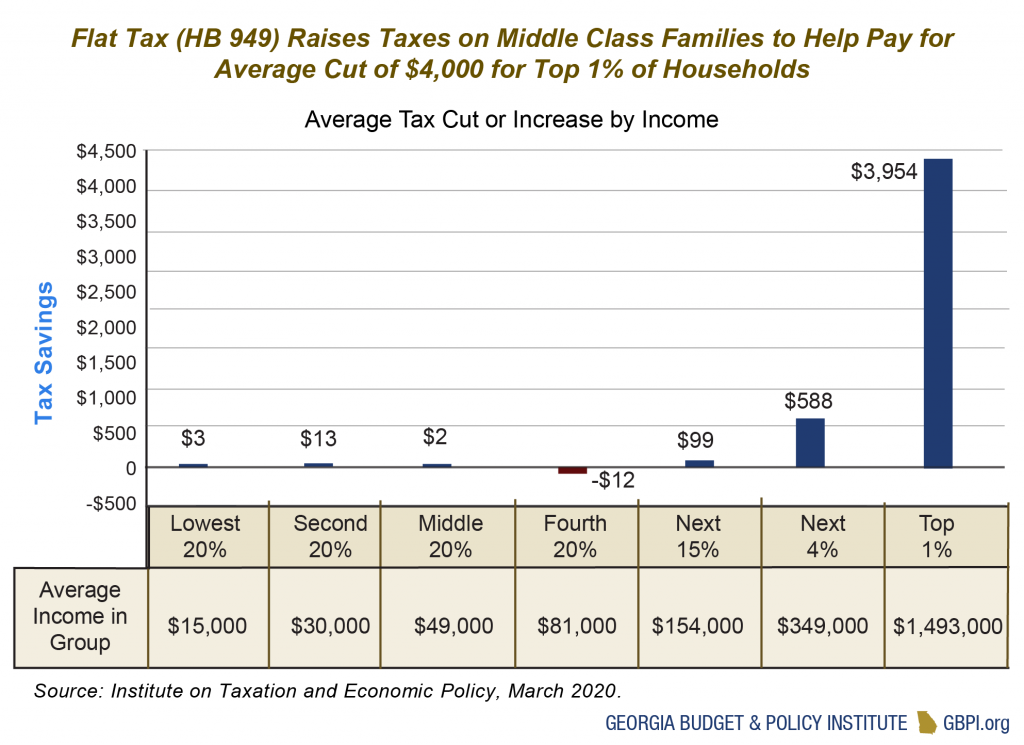 No identifiable group in the state of Georgia has obtained a disproportionately larger share of the tax savings initiated by recent federal and state legislative changes than the highest-income earners. This same group would again be the overwhelming beneficiaries of the flat tax proposed in HB 949. Amid increasing economic uncertainty and slowing revenue collections, there are clear risks associated with abandoning the structure of Georgia’s largest and most dependable source of revenue in favor of a flat tax that would almost exclusively benefit high-income earners at the expense of low- to middle-income Georgia families, like teachers or nurses across our state.

Capping the top income tax rate at 5.375 percent under a flat tax carries serious risks of limiting the revenue-generating potential of the personal income tax as data shows top earners have experienced by far the largest rate of growth in income over recent years. From 2007-2019, wages for the top 5 percent of earners in Georgia grew by 17 percent, but wages for middle-income earners at the 50th percentile fell by 1 percent over the same time frame.[1]

There are opportunities for tax reform in Georgia that would allow the state to increase revenue collections, while simultaneously reducing the amount of taxes owed by many low- to middle- income taxpayers. For example, this legislation does not address the state’s exceptionally low standard deduction, which is not indexed to inflation and remains at one of the lowest levels in the nation despite estimates showing that more than 86 percent of taxpayers use the standard deduction rather than itemizing. Notably, in addition to raising taxes on most of the middle-class families that would experience an observable tax change under the proposal, the thresholds proposed for HB 949’s non-refundable tax credit would exacerbate the existing marriage penalty, which is created by the state’s low standard deduction and causes married couples to pay a larger percentage of their income in taxes, on average, than single filers.

Georgia also offers an array of relatively generous itemized deductions, tax credits, and loopholes that most Georgians can’t access to reduce their tax liability. In addition to establishing a review process for future tax breaks, lawmakers should begin a thorough review of Georgia’s tax code to identify provisions that offer a poor return on investment and consider ways to repurpose those revenues to ensure Georgians paid the lowest incomes do not pay a higher share of their take-home pay in state and local taxes than those who earn the highest incomes. Finally, if lawmakers want to help low-and middle-income families, they can look to a Georgia Work Credit, or state-level earned income tax credit.

GBPI’s research on HB 949 relies on data produced by Georgia State University’s Fiscal Research Center, estimates prepared by the Institute on Taxation and Economic Policy (ITEP) and GBPI’s analysis of other available information and data sources.

Unless otherwise noted, the specific effects to taxpayers—in the form of net-tax effects or offsetting tax cuts and tax increases—are sourced from ITEP estimates generated in March 2020. ITEP’s analysis simulates the effects of these legislative tax changes on approximately 5 million Georgia tax filers to produce estimates for the average tax change across quintiles of income.

GBPI’s research reveals that when fully implemented, HB 949 would cost the state a total of $383 million in lost revenue over the current Fiscal Year 2022 baseline, significantly more than the $223 million projected under the fiscal note attached to the legislation, which was prepared for the Department of Audits and Accounts by Georgia State University’s Fiscal Research Center (FRC). This difference means that GBPI’s research on HB 949 projects that a lower level of offsetting tax increases will take effect for low- and middle-income families than what is projected in the state fiscal note attached to the current version of the legislation, although the FRC’s analysis does not include estimated effects for taxpayers by income group.