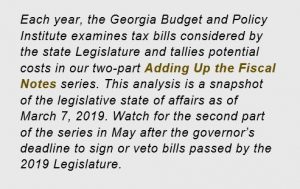 The Georgia General Assembly approved 16 major tax bills between January and “Crossover Day,” the deadline for legislation to clear at least one chamber to be eligible for final passage this legislative session. Georgia’s constitution requires any measures raising revenue must originate in the House of Representatives. Now the Senate will consider 14 changes to Georgia’s tax code over the next month. On the other side of the Capitol, members of the House will examine two key Senate bills that propose adding greater transparency and accountability to the process for considering future tax legislation. Members of the General Assembly can continue debating these bills and other measures until the session is scheduled to adjourn for the year on April 2.

Legislation approved by the House includes an increase in the value of the state’s jobs tax credit for rural counties that targets strengthening Georgia’s health care workforce and a 20-year extension of the state sales tax exemption on jet fuel. Eight tax breaks combine for a total estimated fiscal impact of $545 million in lost revenue over the next five budget years.

Two bills seek to broaden Georgia’s tax base and better position the state’s revenue collections to keep pace with a changing economy. House Bill 182 requires online retailers with more than $100,000 in revenues to collect and remit sales tax. This measure follows last year’s House Bill 61, which initially set the threshold for online retailers at $250,000 and the U.S. Supreme Court decision upholding the state’s authority to tax online retailers bolstered Georgia’s effort to collect online sales tax that was lost to the state without this measure. Correspondingly, House Bill 276 calls for “marketplace facilitators,” or companies brokering the sale of more than $100,000 in property or services, to levy the same sales taxes. Over five years these bills would generate more than $482 million in additional state revenue. Further, the House approved House Bill 321, a five-year renewal of the hospital provider fee that funds Georgia’s Medicaid program. Although the bill does not have a fiscal note, maintaining this reliable revenue source promises a significant return. In FY 2020, the state of Georgia expects to collect more than $310 million from the provider fee, which will be used to draw down more than $650 million in matching federal funds.

The table that follows outlines the state’s fiscal projections for the major tax proposals currently eligible to become law: 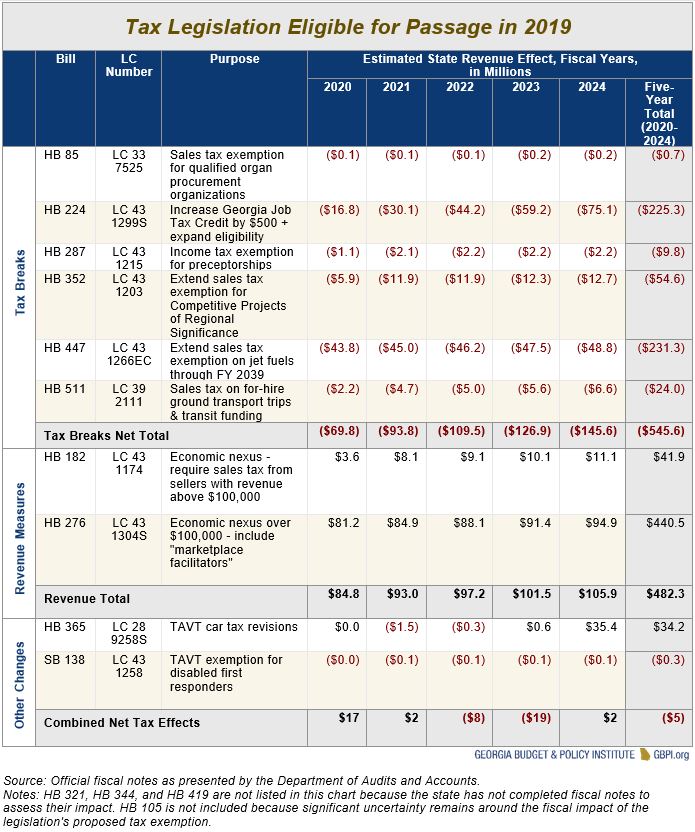 Overview of the Proposed Tax Bills:

The list below summarizes legislation impacting state revenues currently under consideration by the Georgia General Assembly.

House Bill 85: Creates a sales tax exemption for purchases made by qualified organ procurement organizations from 2020 through 2025.[1]

House Bill 105: Provides Georgia farmers with a state income tax exemption for Hurricane Michael aid accessed through disaster relief or assistance programs administered by the U.S. Department of Agriculture. The exemption would cover tax years beginning January 1, 2019 through December 31, 2021. While noting the estimates are “highly uncertain” because the specific provisions of federal aid packages are not finalized, Georgia State University’s Fiscal Research Center estimates the proposed exemption will reduce state revenues by between $39 and $58 million from FY 2020-21.[2]

House Bill 182: Requires remote sellers and online retailers to collect and remit state and local sales tax if they exceed $100,000 in Georgia sales.[4]

House Bill 224: Increases the value of the Georgia Job Tax Credit by $500 for employers in rural and underserved counties, as tiered by the Department of Community Affairs. House Bill 224 also reduces the total employment level necessary to receive the Georgia Quality Job Tax Credit and lifts the minimum threshold to qualify for the Investment Tax Credit from $50,000 to $100,000.[5]

House Bill 276: Adds the term “marketplace facilitator” to Georgia’s revenue code to require any person who facilitates the sale of taxable property or services to collect and remit state and local sales tax if their revenues exceed $100,000 in the previous or current calendar year.[6]

House Bill 344: Creates a 2020 statewide election ballot item asking Georgia voters to approve a tax exemption for nonprofits like Habitat for Humanity from paying taxes on property being used to build, repair or lease single-family homes to further the organization’s charitable mission.[8]

House Bill 352: Extends the sunset date for the sales tax exemption provided to “competitive projects of regional significance” through 2024. To qualify, another state or nation must be competing to secure a large-scale project with a significant impact on a Georgia region.[9]

House Bill 447: Sets the sunset date for the state’s sales tax exemption on jet fuels to expire in fiscal year 2039. The legislation also creates a new $0.005 per gallon excise tax on distributors that will generate about $3.6 million a year—raised in large part by a 9-to1 ratio in matching federal funds—for aviation projects in rural communities. [12]

House Bill 511: Enables Georgia counties to raise sales taxes for transit expansion upon receiving approval from voters. The amended legislation maintains the existing sales tax rate on for-hire ground transportation services like Uber or Lyft, rather than the bill’s original 50-cent per-trip fee and allows the state to dedicate these revenues to fund transit projects.[13]

The state Senate advanced two landmark bills that could help maximize the state’s return on investment when considering future tax expenditures. Senate Bills 119 and 120, sponsored by Senator John Albers, comprise a legislative package that seeks to improve the decision-making process for investments made through the state’s tax code. If advanced by the House and signed into law by Gov. Kemp, these bills provide the legislature with authority to conduct a full review of Georgia’s tax code, develop a standard process to ensure the General Assembly can more deliberately consider the impact of future revenue bills and require a full ten-year fiscal analysis to determine the effects of proposed tax legislation.

Although Georgia’s economy is in its ninth consecutive year of economic expansion, state revenue growth is expected to register at its lowest level since the Great Recession. Lawmakers would be wise to continue maintaining a cautious approach to adding additional tax expenditures while embracing measures like House Bills 182 and 276 that enable the state’s revenue collections to keep pace with the changing economy. Moreover, the procedural reforms proposed by Senate Bills 119 and 120 could greatly benefit members of the General Assembly as larger tax initiatives are likely to be considered in future years. If enacted together, the tax bills under active consideration are estimated to have minimal effects on state revenues. However, beyond these proposals, members of the General Assembly continue debating further changes to the state’s income tax code, potential funding streams for rural broadband infrastructure, an increase in the rural hospital tax credit from $60 to $100 million, the prospect of approving a ballot question on casino gambling and other measures that could significantly impact state revenues. Georgia lawmakers will have the opportunity to consider these and any other pending bills until April 2 – when the General Assembly adjourns the first year of its biennial session.