The unemployment rate is calculated as the number of people who are not working but actively seeking employment divided by the entire labor force. It is one of many important measures of labor market strength. However, its full utility as a policy tool remains unrealized. To truly understand the labor force, two primary actions must be taken. First, the unemployment rate must no longer be singularly highlighted when describing the health of our labor market. Second, the rate and other indicators of labor force participation must be disaggregated across race, ethnicity and gender.

Devoid of these two actions, Georgia will not realize anti-racist policy solutions that fortify the state’s safety net and lead us into a post-COVID economic recovery. These solutions are part of a broader anti-racist vision to reverse the racial disparities experienced by people of color that are caused and perpetuated by structural racism, a collection of discriminatory practices and racial biases across several facets of life, which include but are not limited to health care access, job access and retention, income, housing and education. An anti-racist policy vision not only seeks to remove discriminatory practices and biases but replace them with measures that intentionally close the racial outcome gaps that have widened over generations.

Recent decades have consistently demonstrated that workers of color experience inequitable shares of economic security during our economy’s up and downs, including a disproportionate level of the wage and job losses during recessions and slower growth during the economic recoveries that follow. While those trends have continued in the current COVID-induced recession, three unique elements set this recession apart from previous ones: changes in job-seeking behavior because of the pandemic, the potential acceleration of automation and job changes that can affect the future of work and the increased need to highlight other labor market measures with the unemployment rate in order to accurately assess the health of our workforce.

From April to June, Georgia’s unemployment rate declined from 12.6 percent to 7.6 percent, while the national unemployment rate declined from 14.7 percent to 11.1 percent. These data points capture those who are still considered part of the labor force because they are still listed as actively seeking work. But they exclude those who are no longer seeking work—individuals who are weeks or months removed from jobs in industries deeply impacted by COVID-19 social distancing measures and subsequent heavy declines in consumer demand.

According to the Bureau of Labor Statistics, from March to July, the number of unemployed persons in the U.S. who have been out of work for 15 to 26 weeks has grown from 808,000 to 5.6 million, an increase of over 700 percent. Long-term unemployed workers, those who have been out of work for over 27 weeks, have grown from 1.2 million to 1.5 million, a 30 percent increase from March to July. Moreover, national growth among persons out of the labor force and no longer seeking work has skyrocketed. From 2010 to 2019, non-labor force annual growth averaged 1 percent. So far, in 2020, it has already grown by 6 percent.

Many of those now outside the labor force represent the growing pool of marginally attached workers, those who have not looked for work in the previous four weeks but have looked for work in the last 12 months. While some have left the labor market due to caregiving needs or a lack of available childcare, there are also those who no longer seek work because they believe no jobs are available or that they do not qualify. And because of a rapidly changing labor market that may never be the same due to the COVID-19 pandemic, all of them may face mounting difficulties finding new employment after their hiatus, due to losing skills, a weakening of their professional networks or becoming less desirable to employers.

Because the unemployment rate does not include the growing number of marginally attached workers, the declining rates from month to month can be deceiving. By highlighting this measure by itself, other important elements that describe the health of our workforce are left out. The policy conversation must include a more holistic discussion of the elements that shape our labor market. For example, policymakers should consider the Labor Force Participation Rate, as it provides the share of the civilian population aged 16 and over that are working or actively looking for work, while excluding those who are incarcerated, in nursing homes or in mental hospitals.

Another measure to consider is the Employment to Population Ratio (EPOP), which provides the rate of employed individuals within that same population pool. These measures can shed light on those who are too often left out of the conversation: workers who have been marginalized and who can make sizable contributions to our economy. We must invest in them and retrain them so they can equitably share in economic recovery and contribute to Georgia’s economic growth. 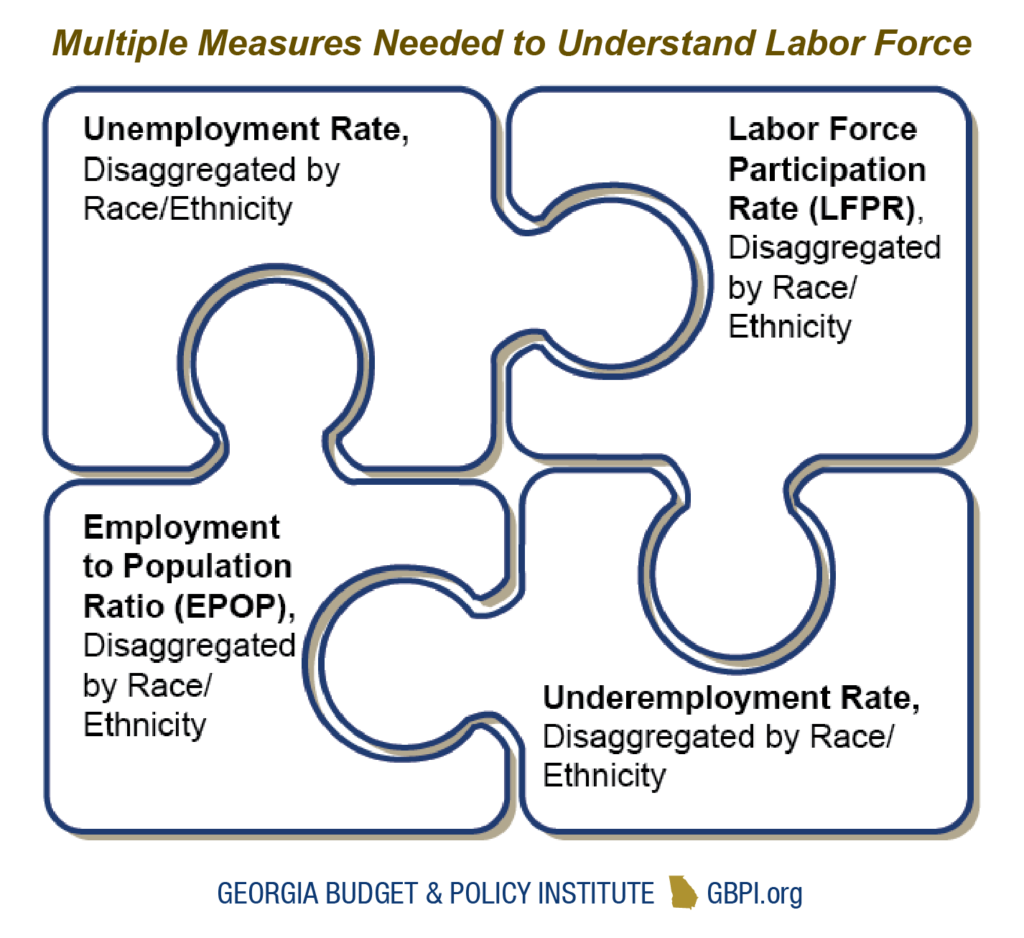 Many employed workers have been driven into underemployment. Underemployment describes the state of wanting to work more hours but having to work part-time because of economic reasons. Research from the Center of Law and Social Policy (CLASP) found that those who have the lowest family incomes, work in lower wage industries and occupations and are given fewer stable hours and schedules were disproportionately underemployed. Workers in lower-wage industries are also disproportionately represented by people of color. The underemployment rate, particularly for workers of color, is often nearly double the unemployment rate of their corresponding race or ethnic group. 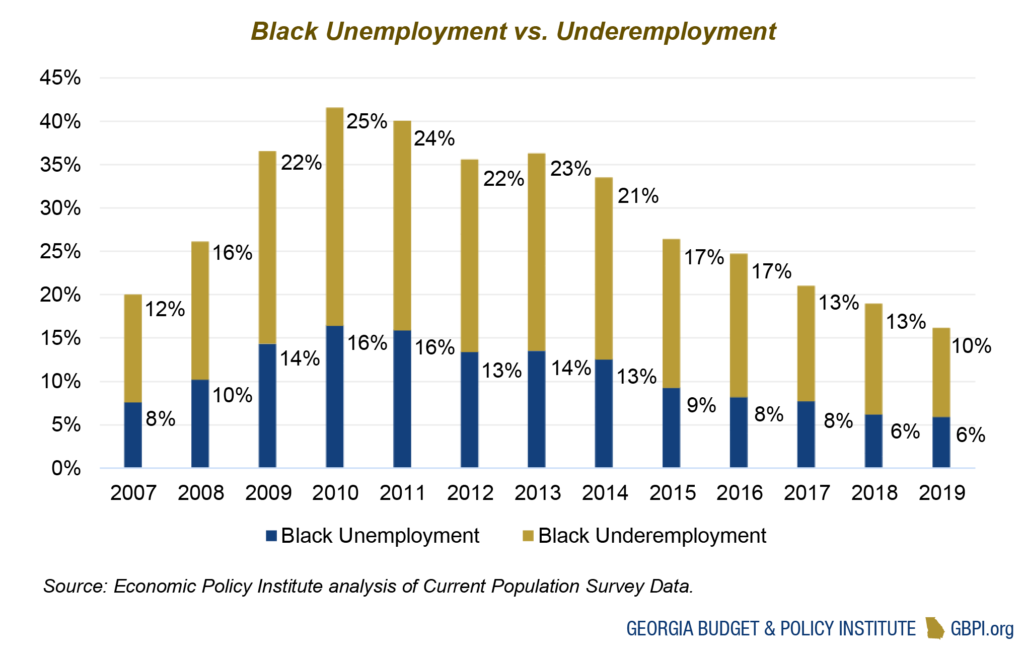 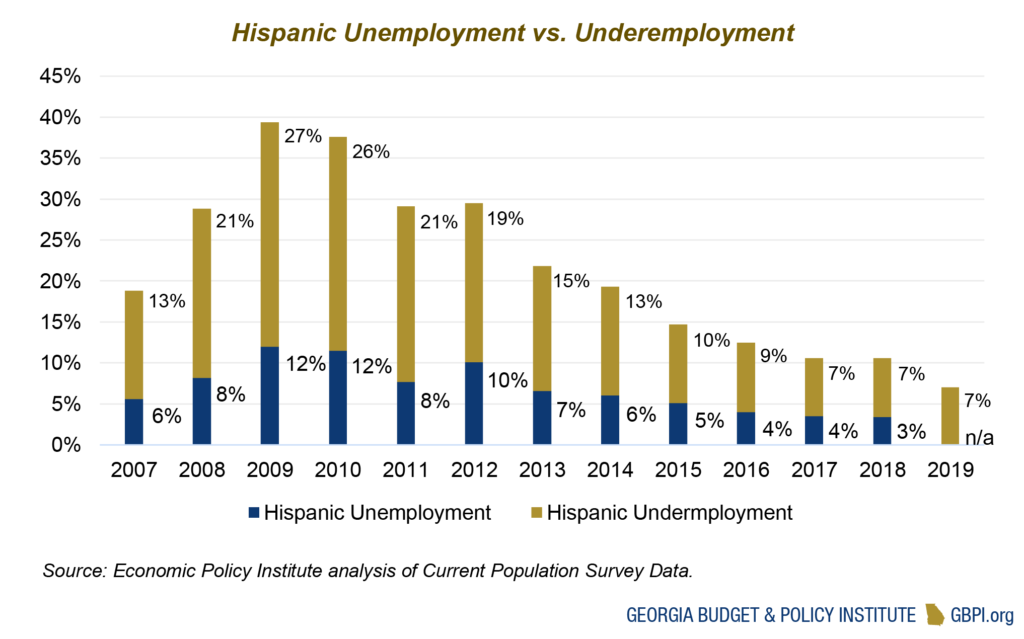 Like the Labor Force Participation Rate and the Employment to Population Rate, the Underemployment Rate is too often excluded when discussing the health of our labor market. Underemployed workers often receive few benefits, limited paid leave and unstable work hours and schedules and face restricted paths to advancement or career growth. These conditions are dually harmful: they hurt the economic security and mobility of families, and they limit the growth of the economy. Like the aforementioned measures, the underemployment rate must be considered in our policy efforts to improve the safety net and our overall economy. Neither should exist alone.

Disaggregating by Race, Ethnicity and Gender

These measures must be considered as a package to inform our policy solutions but also universally disaggregated and discussed by race, ethnicity and gender across policy spaces. This effort must be undertaken via agency data collection efforts and public information campaigns across local, state and federal branches of government, as well as at the highest level, when the Federal Reserve Chairman provides biannual reports to Congress on the state of the economy and solutions to improve its performance across labor market metrics. This call to action joins those of others, including the Center for Budget and Policy Priorities and the Groundwork Collaborative, who proposed that the Federal Reserve target Black unemployment as opposed to the overall unemployment rate.

Saving our economy and creating a path to prosperity for everyone in it requires bold steps. And if we are to be bold in our efforts to recover an economy that realizes the potential of all in its workforce, there can be no other solution than an anti-racist one.