You can download and share all the images and charts in the Budget Trends Primer by clicking here.

The $27.5 billion state budget signed into law by Gov. Brian Kemp for the 2020 fiscal year starting July 1, 2019 represents a $1.3 billion overall increase in state spending from last year, an increase of 5 percent.

The largest addition to the 2020 state budget is dedicated to financing a $3,000 pay increase for all certified teachers and public school staff. The $3,000 is a portion of the larger $5,000 educator pay raise championed by the governor. It will cost the state $530 million in the 2020 fiscal year. The budget also includes $133 million for K-12 enrollment growth, $48 million for charter system grants and State Charter Schools Commission supplements and $79 million for charter school equalization. The state also allots $165 million for growth in Georgia’s Medicaid and PeachCare programs. 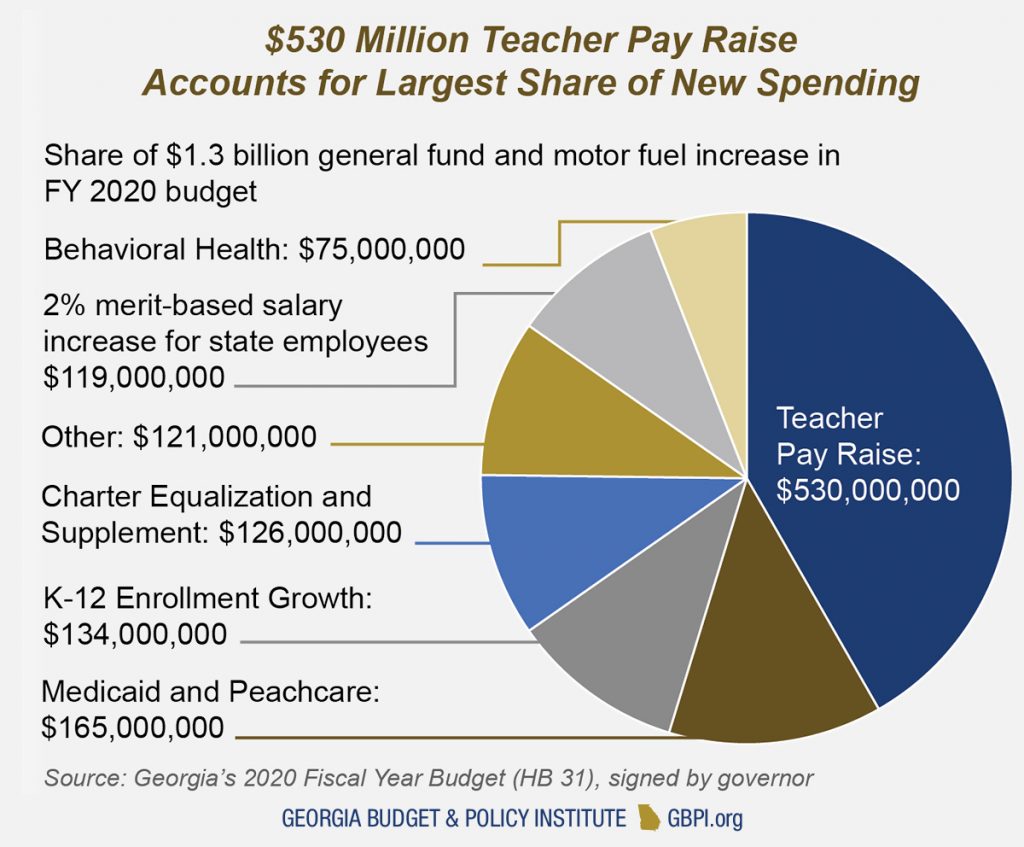 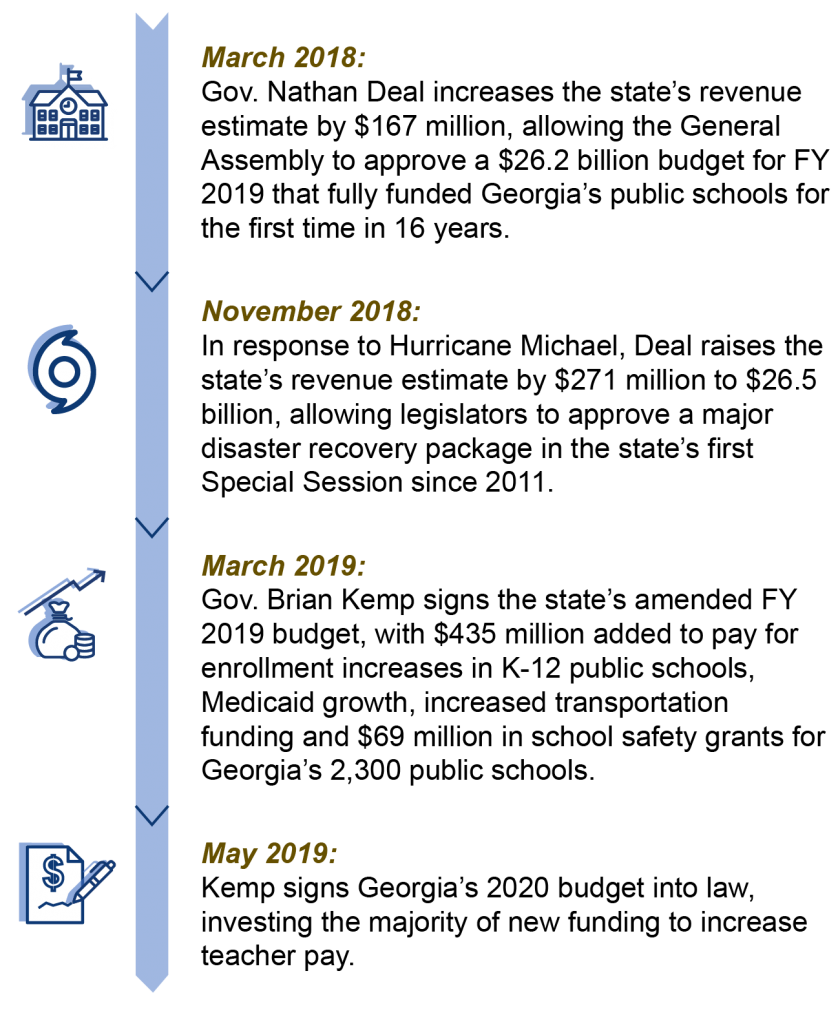 The Revenue Shortfall Reserve is Georgia’s rainy day fund, meant to provide stability during economic downturns. The fund acts like a savings account for the state to cover expenses and maintain services when revenues decline unexpectedly. Maintaining adequate reserve money is also important to keep Georgia’s stellar AAA bond rating, a top rating that allows lawmakers to borrow money at favorable terms and save millions of dollars in annual interest payments.

Lawmakers do not directly appropriate money to the reserve fund. The balance grows at the end of each fiscal year if there is surplus state revenue – up to 15 percent of the prior year’s revenues. At the outset of the Great Recession, the reserves reached $1.5 billion before lawmakers tapped the savings to help balance budgets in 2008, 2009 and 2010. Still, the state cut many important services and programs during the recession and for years after. The balance of Georgia’s rainy day fund now stands at $2.55 billion, or 10.5 percent of 2019 General Fund revenues. That is enough money to operate the state for 34 days in the event of an emergency or recession. 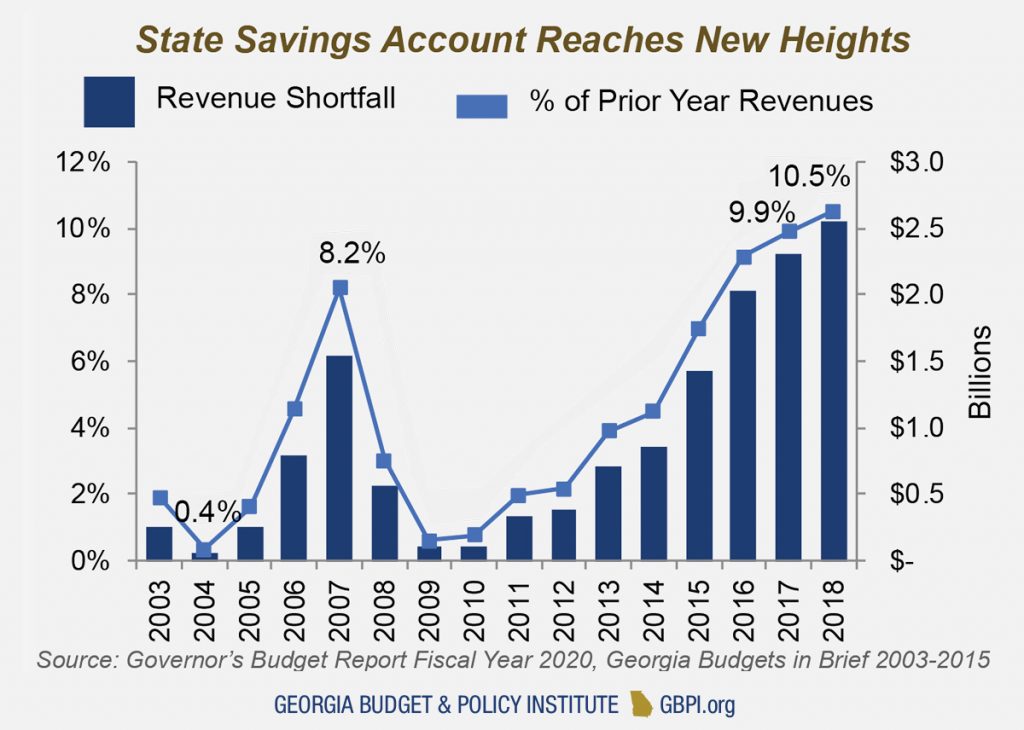 The Georgia General Assembly approved 26 tax bills in 2019, including one to extend the state’s sales tax exemption for large-scale economic development projects. Georgia continues to forego billions of dollars in state revenue each year through dozens of credits, deductions and other breaks, also known as tax expenditures. Georgia’s assortment of tax breaks are designed to achieve policy goals, such as driving economic growth or boosting family finances. The tax breaks are estimated to cost the state $9.8 billion in lost revenue in the 2020 budget year. Even by a more conservative estimate that excludes a set of business sales tax exemptions found in most states, Georgia’s tax breaks still yield an annual cost of about $5.9 billion.

Some tax breaks provide key protections for families and the economy. Those include sales tax exemptions for groceries and some business purchases, such as energy used in manufacturing. Others deliver outsized gains to select groups or industries, often with questionable benefit to the state. Georgia lacks a formal review process to measure and compare costs and benefits of tax breaks. Lawmakers are poised to consider a proposal in the 2020 session to require a fiscal analysis on all future tax breaks. 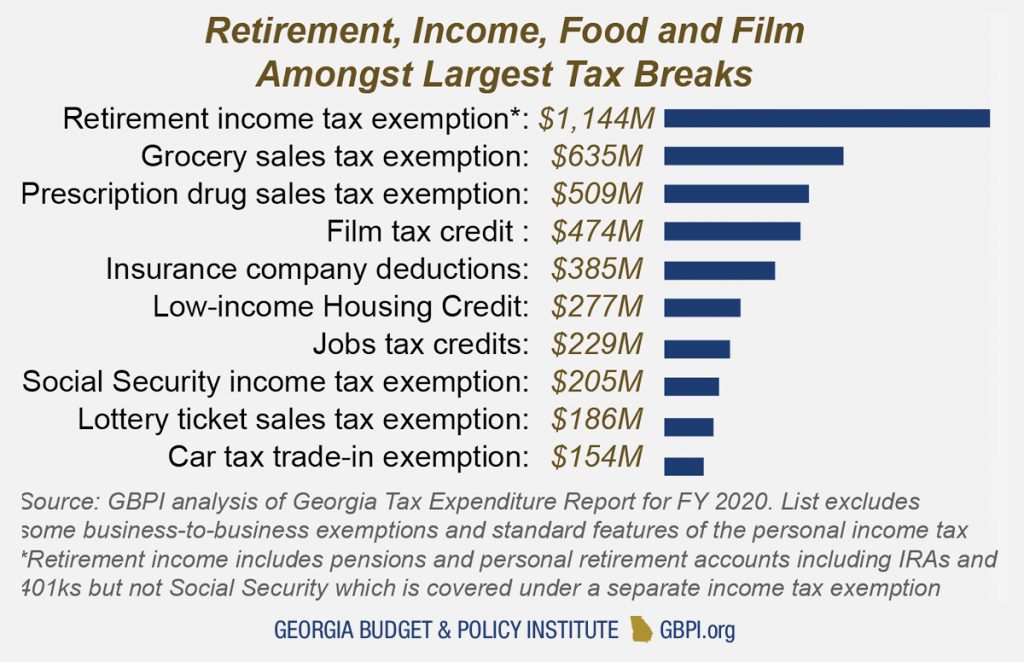 Income Tax Revenues Might Fall Due to Tax Cuts

Some of the state’s most sweeping tax changes in decades took effect in January 2019 in response to the federal Tax Cuts and Jobs Act of 2017. The federal tax code changes increased state revenue projections by as much as $1.1 billion by 2020. The General Assembly opted to phase in a major state-level tax cut package and forgo the additional revenue.

The first phase took effect in January, doubling Georgia’s standard deduction and reducing the state’s top personal and corporate income tax rates to 5.75 percent from 6 percent. In 2020, the General Assembly is authorized by the 2019 state legislation to cut Georgia’s top income tax rate to 5.5 percent if legislators elect to pass a joint resolution.

The federal tax revision is projected to reduce the liability of Georgia residents, estates and state-based corporations by about $7.7 billion in 2020. Meanwhile, the already adopted changes to the state’s tax code are projected to add $130 million to state revenues. State revenues are projected to shrink by $550 million in 2020 if lawmakers set the top income tax rate at 5.5 percent. Some lawmakers propose adopting a state-level Earned Income Tax Credit instead of the rate cut, which carries less cost to the state treasury. It also focuses future tax cuts on low- and middle- income households.

For a full analysis of income tax revenues based on these tax changes, read The Tax Cuts and Jobs Act in Georgia.