Table of Contents show
Bill Analysis: House Bill 918 (LC 34 5351-EC)
Background: State-Federal Tax Links Set Stage for Swing in Georgia Revenues
State Revenue Gain Large at First Glance, Modest in Comparison
More Details: What Creates Georgia’s Potential Revenue Gain?
Governor’s Tax Plan Erases New Revenues
Conclusion
“Given the substantial uncertainty around the ultimate revenue impact, states should respond cautiously. They also should be prudent because new threats to their fiscal stability loom, including the potential for cuts in federal aid for states and localities and the inevitability of another recession.” – “How Should States Respond to Recent Federal Tax Changes,” Center on Budget and Policy Priorities
Endnotes

– GBPI press statement issued Feb. 20 in response to governor’s revised tax cut plan introduced earlier that day: “Gov. Nathan Deal’s rushed tax cut plan is worrisome because slashing the income tax rate holds the potential for unintended consequences. Nobody knows what the effect of December’s federal tax cuts will be on Georgia next year or the year after. Nobody knows what kind of funding and economic challenges are on Georgia’s horizon. Without more clarity, a rate cut is fiscally reckless and jeopardizes the state’s ability to meet the demands of a growing population. Georgia continues to fall short of the state’s obligations to fully fund its public schools and broker a solution to extend affordable health care to hundreds of thousands of people. Instead, the governor and state leaders now propose to layer on another tax cut on top of the federal decrease, while sending a good portion of the spoils into the pocketbooks of the wealthiest Georgians. A cautious, measured approach to fully understand and realize the largely unknown impact of the recent federal tax changes had the support of state leaders until just last week. That remains the more prudent approach.”

Gov. Nathan Deal’s administration introduced a multifaceted tax package on Feb. 13, 2018 designed to reduce state revenues by about $1 billion a year over the next decade. House Bill 918 comes in response to recent news that the federal tax changes signed into law by President Donald Trump in December could generate a so-called windfall of new state revenue. The governor’s new tax package includes moderate increases to Georgia’s personal exemptions for individuals and dependent children. It also shifts Georgia tax law to allow people to itemize their deductions for things like mortgage interest on their state taxes, even if they claim the standard deduction on their federal return.

The governor’s tax plan raises important questions for legislators charged with responsibly managing the state’s finances and reliably meeting Georgians’ needs for quality public services. On one hand, it’s reasonable for lawmakers to feel pressure to avoid any semblance of a state tax increase due to policy choices made beyond their control by national leaders. A commendable aspect of the governor’s proposal to accomplish that goal is that it avoids more reckless tax-cutting strategies, such as lowering Georgia’s top income tax rate of 6 percent.

At the same time, a rushed effort to cut taxes late in this year’s legislative session could lead to unintended consequences, a concern the governor first raised when the possibility of increased revenues emerged last month.[1] Eventual revenue collections might fall short of preliminary projections, or the next economic recession might lurk around the corner. Those kinds of things combined with a state tax cut could lead to financial strain in future years, more so if Congress enacts sweeping budget cuts to key services such as Medicaid and food assistance that federal lawmakers appear poised to consider. With these and other threats to Georgia’s fiscal stability on the horizon, policymakers should approach any plan for slashing taxes with caution.

Changes to national tax laws often spillover to influence state revenues. The legislation that Congress and President Trump approved in December is projected to affect revenues in Georgia, which links its state income tax system to the federal tax system as most states do. Georgians start their state income tax calculations by copying the line for adjusted gross income from their federal tax returns for example. Then they select from roughly the same list of deductions available at the federal level, including mortgage interest and charitable contributions. States usually choose to piggyback on the federal tax code because it keeps state income taxes simple for taxpayers to file and easy for state administrators to process.

Each year, state legislators approve legislation known as the Internal Revenue Code update that incorporates select federal tax revisions from the prior year into Georgia law. This annual housekeeping exercise is usually routine, with fairly small effect on Georgia’s overall revenue stream. The implications are larger this year because of the sweeping scope of the new federal tax law. 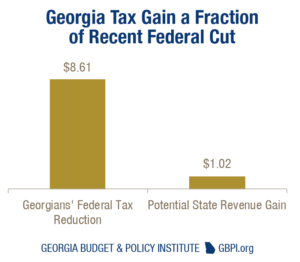 Initial estimates from multiple sources suggest Georgia revenues will increase if lawmakers link state adaptations to federal tax law as usual. Lawmakers can count these early estimates as ballpark figures, due to a high degree of complexity and uncertainly.[2]

The first batch of estimates released by state experts in late January suggests the federal tax law could increase revenues about $735 million a year, on average, over the next five years.[3] Later state calculations put the average gain at $940 million a year over that same span, according to the Atlanta Journal-Constitution.[4] The state revenue increase could reach as high as $1.02 billion a year, according to estimates provided by the nonpartisan Institute on Taxation and Economic Policy in Washington, D.C.[5]

For context, $1 billion revenue equals about 4 percent of Georgia’s expected tax and fee collections for the upcoming 2019 budget year that starts July 1, 2018. The possible state revenue influx is also a fraction of the federal tax reduction that Georgians can expect to realize over the next few years. The recently passed national plan is projected to lower Georgians’ federal tax bill by an estimated $8.6 billion a year over the next decade, up until the changes are set to expire in 2027. The new contributions Georgians would make to state revenue assuming the standard link to federal tax law equals only about 12 percent of their federal tax cut.

If lawmakers adopt the Internal Revenue Code update as usual, the additional revenues would offset a relatively small share of Georgians overall total tax cut. For example, the middle fifth of Georgia taxpayers, or households with average incomes around $46,000, would pay the state an additional $122 a year on average. But they could still expect a net tax reduction of about $519, due to the large scope of December’s federal tax bill.

Georgia’s potential hike in state revenues is mostly due to the interplay of three factors arising from December’s federal tax changes.  The combined effect is expected to push more Georgians to take the state’s standard deduction rather than itemizing deductions.

Together these factors mean many Georgians who now receive a large incentive to itemize deductions on federal returns would likely get pushed into claiming the state’s meager standard deduction on their Georgia return.

The governor’s new proposal to offset the effects of December’s federal tax changes is a multipart tax package that reduces state revenues by an estimated $970 million a year over the next decade, according to early estimates by the nonpartisan Institute on Taxation and Economic Policy.[10] The plan features two main components:

Georgia lawmakers understandably feel pressure to avoid what could look like a state tax increase, an outcome set in motion by national leaders. Still, lingering uncertainties suggest Georgia lawmakers need to proceed cautiously with any push to cut revenues during the 2018 legislative session.

Actual tax collections might fall short of preliminary projections, as the governor’s leadership team noted when this issue emerged last month. That is an especially high risk in this case, because the complexity of federal and state tax interaction makes calculating potential revenue effects an imprecise exercise. Other threats to Georgia’s budget also loom on the horizon, such as the potential for sweeping federal budget cuts and the inevitability of another future recession. President Trump’s budget proposal this month makes deep cuts to Medicaid and slashes the Supplemental Nutrition Assistance Program by nearly 30 percent over 10 years.[11] Such cuts would likely pressure Georgia budget-writers to backfill funding with state dollars to maintain the vital services Georgians use every day.

A rush to cut $1 billion worth of yearly revenues carries at least some risk of unintended consequences. One reasonable option is for lawmakers to accept the federal changes now and revisit the tax and spending debate next year, once revenue collections and Georgia’s fiscal outlook are more certain. At a minimum, lawmakers this year should exercise care and avoid any rash decisions that could jeopardize Georgia’s fiscal health and economic future.

“Given the substantial uncertainty around the ultimate revenue impact, states should respond cautiously. They also should be prudent because new threats to their fiscal stability loom, including the potential for cuts in federal aid for states and localities and the inevitability of another recession.”
– “How Should States Respond to Recent Federal Tax Changes,” Center on Budget and Policy Priorities

[5] Estimates by the Institute on Taxation and Economic Policy provided to GBPI upon request, 2/13/2018.

[9] “The Distribution of Select Federal Tax Deductions and Credits Across the States,” Pew.

[10] Estimates by the Institute on Taxation and Economic Policy provided to GBPI upon request, 2/13/2018.