Georgia legislators and Gov. Nathan Deal approved 11 tax measures during the 2018 legislative session that will affect state revenues in coming years. Ten bills with immediate revenue implications will cost an estimated $862 million over the next five years, compared to Georgia’s past collections. This cost is in addition to the billions of dollars’ worth of surplus revenue that Georgia lawmakers chose to forego from the recent federal tax changes. The remaining bill levies sales taxes on online purchases and could lead to higher state and local revenues down the road, but only if the U.S. Supreme Court authorizes those collections in a pending federal tax law case.

Of the 11 measures approved this year, two establish large-scale, lasting changes to Georgia’s tax system while the remaining nine consist of more modest or temporary changes.

This year’s legislative session will likely be remembered for enacting some of the most significant changes in Georgia tax policy in decades. Rather than leveraging billions of dollars in unanticipated revenue to invest in strategic needs such as education and health care, lawmakers voted to provide typical Georgia families with a modest tax cut. And faced with a growing online economy that’s undermining sales tax collections and harming brick-and-mortar businesses, they seized an opportunity to bring state taxes up to par with modern needs. Each choice could affect Georgia’s finances substantially for many years to come.

The 11 tax measures approved by Georgia lawmakers are listed in the table and detailed on the following pages. The hypothetical revenue envisioned by House Bill 61 is listed separately and not included in the totals, since it is contingent on a Supreme Court case and may not materialize. 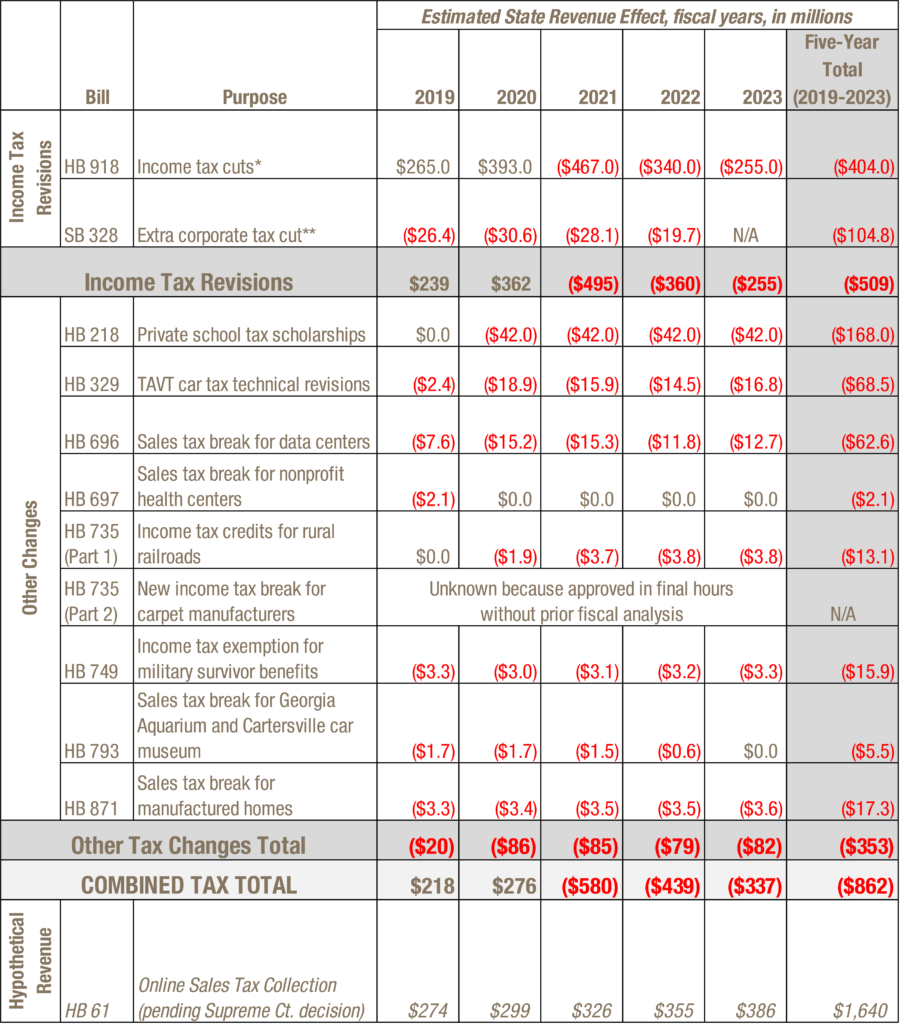 In mid-January 2018, news reports circulated saying federal tax changes signed into law by President Donald Trump in December might provide Georgia a lot of new state revenue, due to complex interactions between state and federal tax law. State experts eventually pegged the revenue gain at about $1 billion a year if lawmakers followed their customary annual adjustments to federal tax changes.[1]

Georgia lawmakers instead moved to eliminate the so-called windfall of new revenues and avoid an income tax increase through HB 918. The plan includes cuts to Georgia’s personal and corporate income tax rates and a doubling of the state’s standard deduction. It erases the surplus revenue caused by the federal tax revision, then cuts a bit deeper into existing state revenues. Rather than gaining about $5.1 billion over five years, Georgia loses about $400 million over that span. More detailed GBPI analysis of House Bill 918 is available in “Lawmakers Might Come to Regret Georgia’s Risky Tax Plan.”

An additional change to Georgia tax law stemming from last year’s federal revisions was tacked on to an unrelated bill later in session, under pressure from national and state corporations.[2] Senate Bill 328 says Georgia will not conform to new federal rules designed to ensure corporations pay at least some minimum tax on above-average profits they either earned abroad or shifted to overseas subsidiaries for tax purposes.[3] The extra corporate cut adds an additional cost to Georgia over about $105 million over four years, according to initial estimates from the state’s Department of Revenue.[4]

Big Revenues from Potential Online Sales Tax Might Not Materialize

This year’s General Assembly also approved a sales tax expansion that offers the appearance of a revenue windfall. House Bill 61 requires online retailers doing significant business in Georgia to either collect sales taxes on purchased goods or send tax-due notices to those customers. The bill is designed to give Georgia the ability to apply sales taxes to the fast-growing market of online purchases. The lack of online tax collections harms small businesses and local main streets and contributes to the state’s declining sales tax base.

Analysis of the state’s official estimates on the bill indicates the changes could generate as much as $1.6 billion in new state revenue over the next five years and another $1.2 billion in local revenue during that time.[5] However, Georgia is waiting to find out how the Supreme Court rules in a case expected to decide whether the U.S. Constitution’s commerce clause prohibits the states from requiring out-of-state retailers that do not have a physical presence in the state to collect tax on sales to state residents. State and local governments are now barred from collecting sales taxes from many online purchases under federal law, due to a 1980s court precedent. Justices heard the pending case in early April and initial reports suggest they are divided.[6]

More on Other Tax Bills

The list below briefly describes the other eight tax bills approved by the 2018 General Assembly, ranging from an expanded exemption for private school savings to new tax breaks for railroads and data centers.

House Bill 217 expands Georgia’s tax credit program for private school scholarships. It raises the annual limit on tax credits for contributions to student scholarship organizations to $100 million from the current cap of $58 million. The extra $42 million a year is scheduled to expire in 10 years, unless legislators extend it again in the future. The bill also calls for a review of the decade-old voucher program to be completed in 2023, a nod toward accountability that could help lawmakers get a clearer picture of the program’s true costs and benefits.[7]

House Bill 329 is a revision to Georgia’s title ad valorem tax (TAVT) on cars, which lawmakers tinkered with almost every session since its 2012 creation. The measure reduces the fee on vehicles new residents bring into the state to 3 percent from 7 percent. It also adjusts the state’s distribution formula for how vehicle tax revenues are split between local governments and the state treasury, making it somewhat more favorable to cities and counties than in the past.[8] The proposed changes went through a series of iterations over the course of debate, and could have resulted in either big revenue gains or losses for local governments depending on the version.[9] The legislation lawmakers passed could cost an estimated $69 million in lost state revenue over five years and $84 million in local revenue over that span.[10]

House Bill 696 creates a sales tax exemption for large-scale data centers such as one planned for Atlanta by Las Vegas-based Switch,[11] at a cost of $63 million over five years.

House Bill 735 creates two new income tax credits. One is a recommendation of the Georgia Rural Development Council and is designed to help companies that pay to maintain short-line railroads, which are low-traffic tracks common in rural areas. The second tax credit appears designed to benefit carpet manufacturers that create a certain number of new jobs over the next three years. Lawmakers tacked the unrelated carpet measure onto HB 735 in the late hours of the Legislature’s final day. The tax break’s potential cost to Georgia taxpayers in lost revenue does not appear to be public information.

House Bill 793 extends Georgia’s existing sales tax break on construction materials for expansion of the Georgia Aquarium in Atlanta at a total cost of $4.5 million and creates a new one for building a car history museum in Cartersville at a cost of nearly $1 million.

House Bill 871 exempts the purchase of mobile homes from the state sales tax.

[5] The state’s fiscal note for House Bill 61 was generated during the 2017 legislative session and includes revenue estimates for fiscal years 2018 through 2022. To create consistency with the newer fiscal notes produced in the 2018 legislature, this report produces an estimate for 2023 by simply projecting out the state’s five-year trend one additional year.

[6] “The Supreme Court seems divided over sales tax on online purchases,” The Economist. 4/18/18.