You can download and share all the images and charts in the Revenue Primer by clicking here.

Georgia plans to spend $27.5 billion in state money raised through taxes and fees for the 2020 fiscal year. The budget plan anticipates a revenue increase of $1.3 billion, or five percent more than the prior year.

Georgia’s $27.5 billion 2020 budget is record-setting. The majority of the increase over the prior year is required to simply keep pace with growth and fund a $3,000 pay raise for Georgia’s certified teachers and public school employees. Things like the number of students in our K-12 schools and rising retirement benefits for state employees will almost always increase the cost of running the state from year to year.

Where does Georgia’s Money Come From?

Georgia’s fiscal health depends on the state’s ability to raise money from diverse sources in a reliable way. Like most states, Georgia collects revenue from a mix of personal and corporate income taxes, sales taxes, gas and vehicle taxes, and various other levies and fees.

Income taxes are the cornerstone of Georgia’s revenue system, accounting for more than half of all state funds. Sales taxes are the second largest revenue source, representing a quarter of annual collections. A fair and reliable revenue system requires both types of taxes.

Income taxes help balance the regressive effects of sales taxes and fees by allowing the state to collect a proportionate share of revenue from the wealthiest earners and most profitable corporations. A healthy income tax is also less sensitive to economic trends, which can boost revenue growth during good times but decline sharply when recessions occur.

In January 2019, a new Georgia law began requiring online retailers to collect and remit sales taxes to the state. Marketplace facilitators like Uber’s rideshare and Airbnb’s room rental services remain untaxed. Proposed legislation is pending for 2020 that would expand the state’s authority to apply sales taxes to those two industry categories and other marketplace brokers. 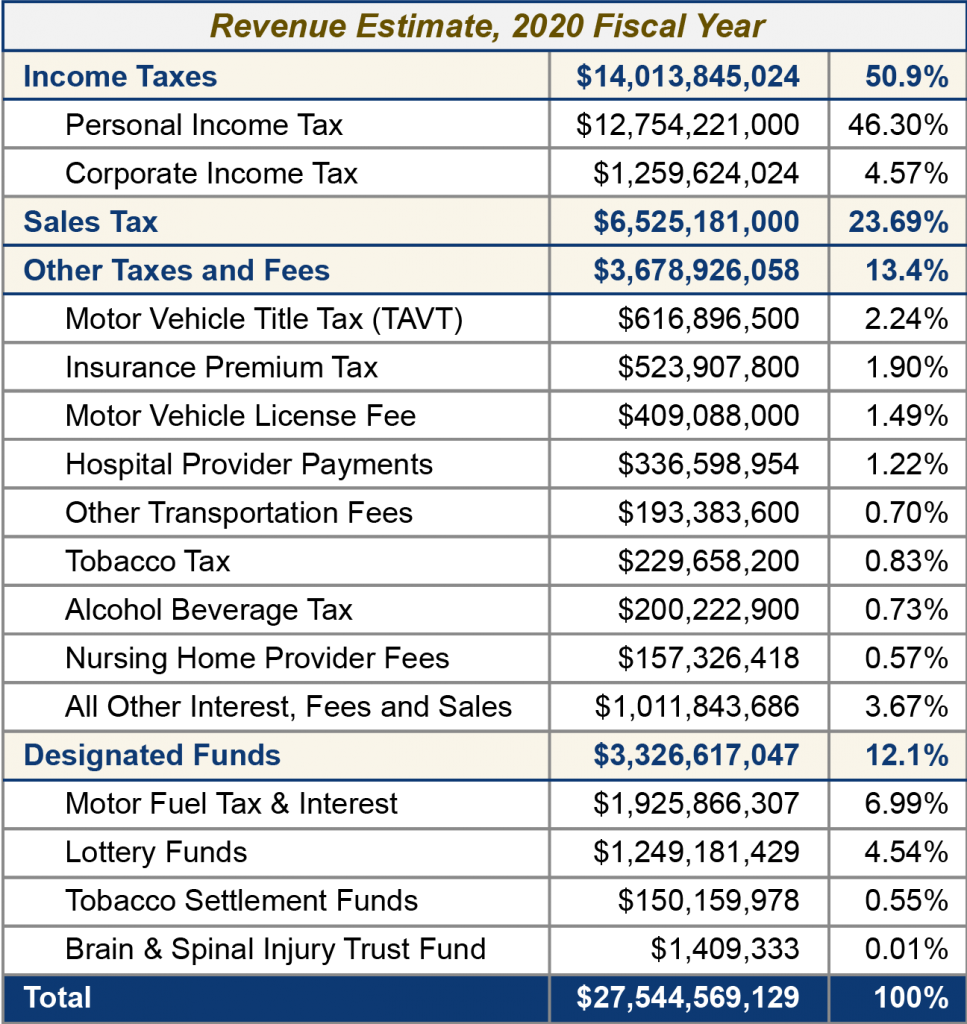 Georgia’s total 2020 budget including federal funds is $48.6 billion and is made up of six major funding sources: 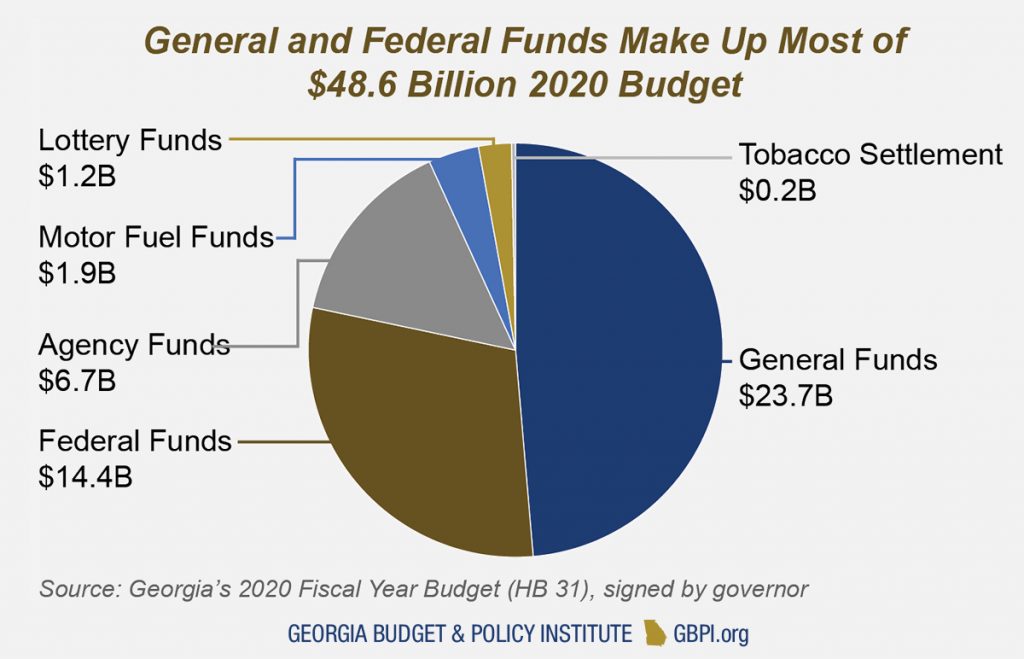 The General Fund derives largely from income taxes on personal and corporate earnings and sales taxes on consumer transactions. The state also taxes motor fuel and assesses provider fees on hospitals and nursing homes. More than 95 cents of every dollar appropriated by the state pays for seven core priorities:

Georgia’s Constitution restricts spending revenue from state motor fuel taxes to roads and bridges. The money is dedicated to a mix of new construction, maintenance of existing infrastructure and debt service on past investments. Georgia’s 2019 motor fuel rates are 27.5 cents per gallon of gas and 30.8 cents per gallon of diesel, a slight uptick from last year. The state’s 2020 budget includes $1.9 billion in motor fuel revenue, an increase of about $30 million over the 2019 budget. 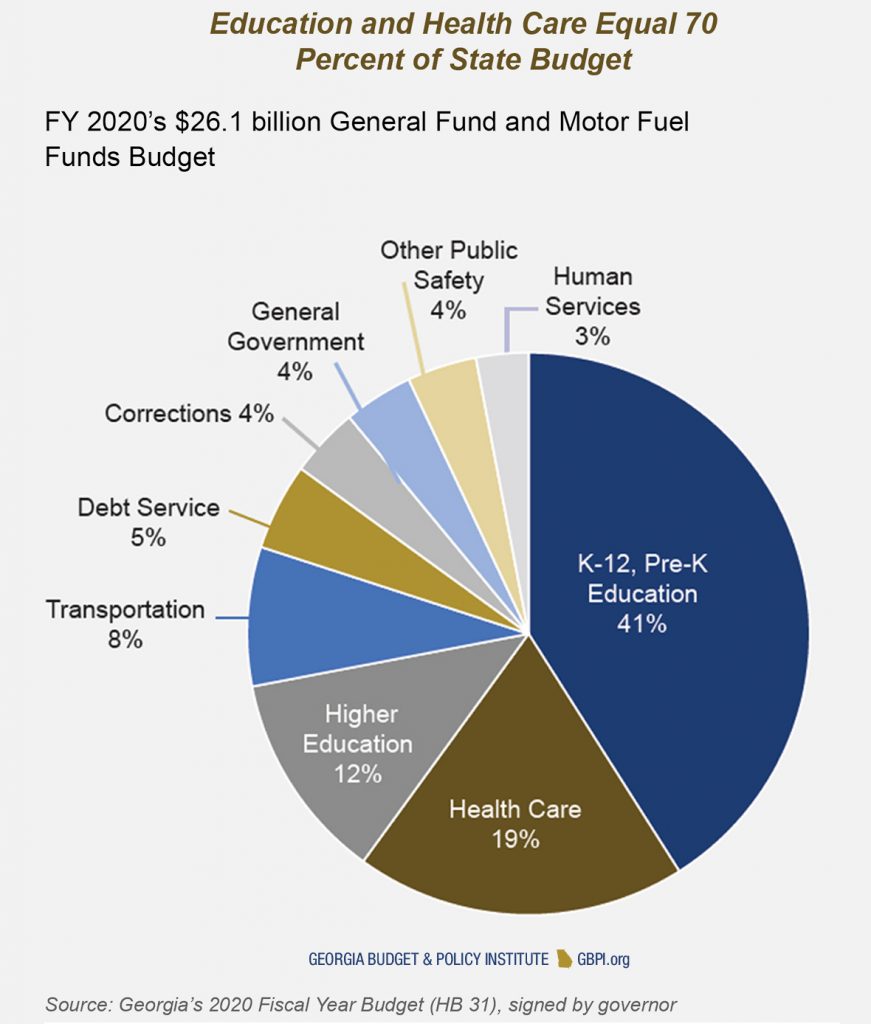 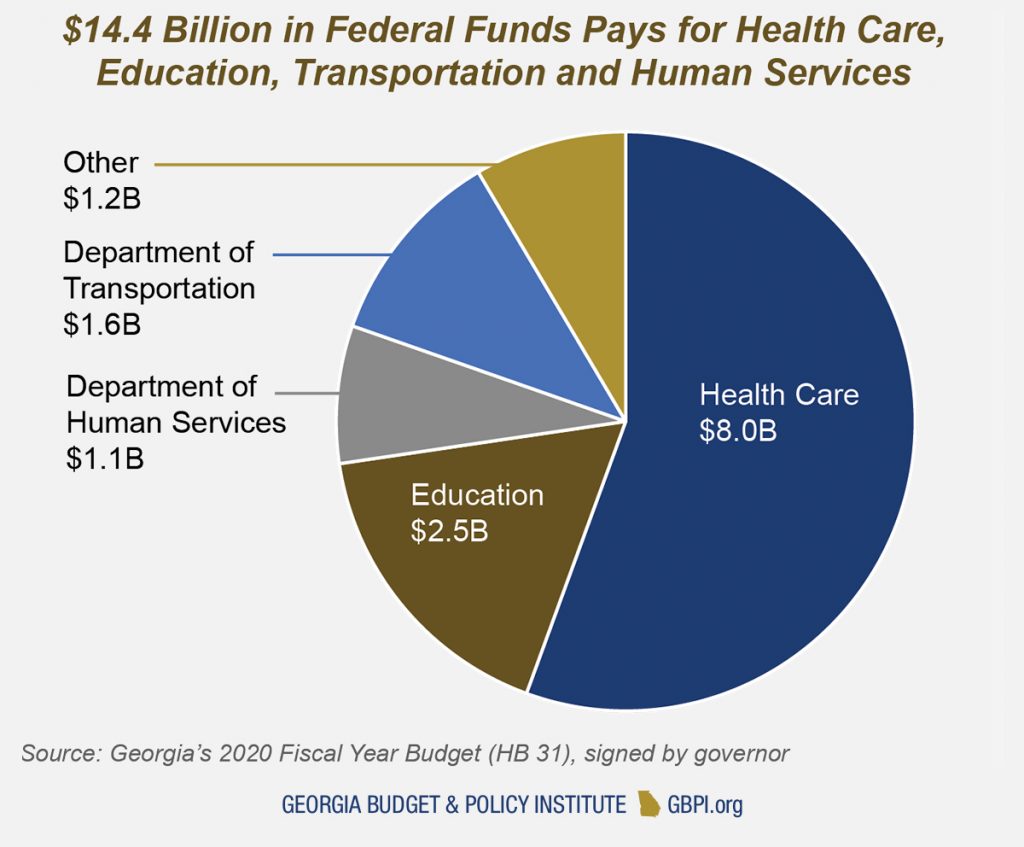 Intrastate Transfers
$4,390,436,712 (Included for reference, but not as a net increase
to Georgia’s budget)

Georgia receives annual payments from a large settlement signed in 1998 with four of the country’s largest tobacco companies, known as the Tobacco Master Settlement Agreement. Georgia is not required to dedicate these payments for specific purposes. As a result, the use of tobacco settlement money can vary from year to year, though most of the money in recent budgets was allotted to health care.