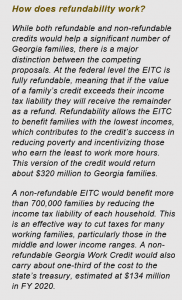 Georgia leaders have the opportunity to take advantage of a proven policy that allows millions of working families to keep more of what they earn. A state Earned Income Tax Credit (EITC), or Georgia Work Credit, offers a substantial list of benefits to working families and Georgia’s economy.

Across the country, 29 states have a version of the federal credit and for several years Georgia lawmakers have considered adding an EITC to the state’s tax code. Members of the General Assembly appear ready for a renewed push to create a work credit this session. This policy brief lays out the most recent data available on how two forms of a state EITC, both refundable and non-refundable, would benefit Georgia families and impact the state’s budget.

About the Georgia Work Credit

Based on the long-standing federal Earned Income Tax Credit, a Georgia Work Credit could cut taxes for up to 1.1 million Georgia families—24 percent of all households—earning up to about $55,000 annually. Simply put, the credit would help working families keep more of the money they earn. Its targeted design also encourages work because as wages rise the value of the tax credit grows to encourage recipients to stay employed and work more hours, while accounting for the number of children in each family.

A state EITC would benefit a broad base of Georgia taxpayers and spur economic growth with especially significant effects for rural Georgia communities. In counties with less than 50,000 residents, approximately 40 percent of filers are eligible for the federal EITC.[1] Previous studies demonstrate that every $1 of tax credit generates a multiplier of up to $2 in output to the local economy.[2] Under this policy, Georgia’s 120 rural counties could be the beneficiaries of hundreds of millions in new economic investment.[3] Furthermore, as part of a broader statewide strategy to improve economic opportunities in rural areas, the work credit helps offer more Georgians a path out of generational poverty. Many of the central issues facing rural communities directly connect to disproportionately high poverty rates. Allowing low- and middle-income families to save a few hundred dollars in taxes each year represents a relatively low fiscal cost for the state but could be highly significant to thousands of Georgians across rural areas. These benefits are especially significant in Southwest Georgia where residents will require continued support in the years ahead to fully recover from the widespread devastation caused by Hurricane Michael. 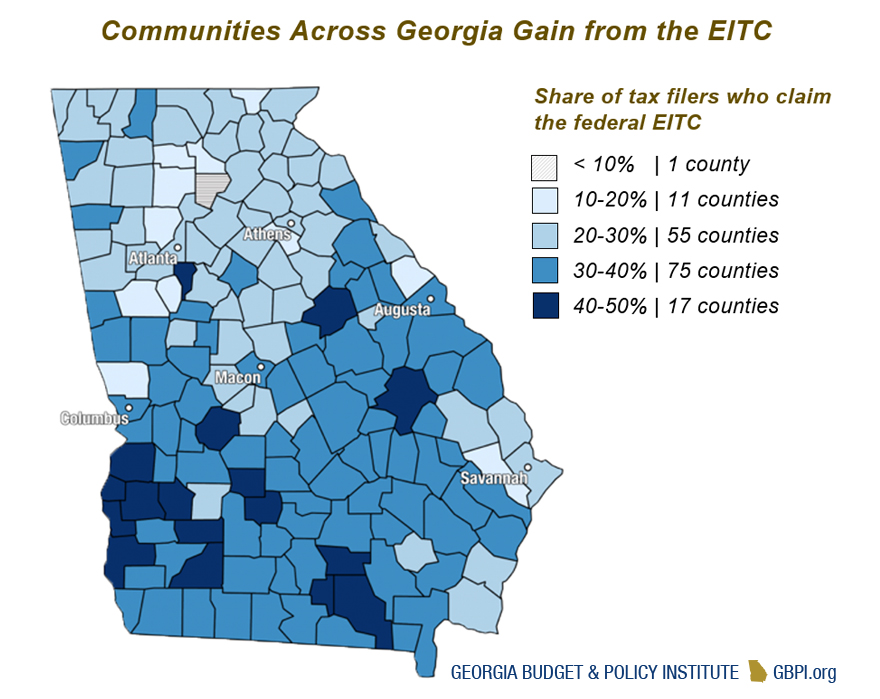 Enacting a state EITC could improve the health of Georgians and allow more working families to afford the increasing costs of quality child care. A recent Emory University study estimates that enacting a Georgia work credit at 10 percent of the value of the federal EITC could result in 1,047 fewer low-weight births each year.[4] Further research suggests that extending EITC benefits to expectant mothers increases the likelihood of prenatal care and is positively linked to improved mental health among children, higher average birth weights and better overall health outcomes.[5] As state leaders continue evaluating proposals to increase access to quality health care, the Georgia Work Credit could be a powerful tool in offering targeted support to families who earn too much to fall under the federal poverty level but still struggle to afford health coverage.

The credit would also add balance to Georgia’s current tax structure by reducing the total share of state and local taxes paid by families earning the least. On average, the poorest fifth of Georgia taxpayers pay an average 10.7 percent of their annual income in state and local taxes, the middle fifth pays 9.8 percent, while the wealthiest 1 percent pays only 7 percent.[6] 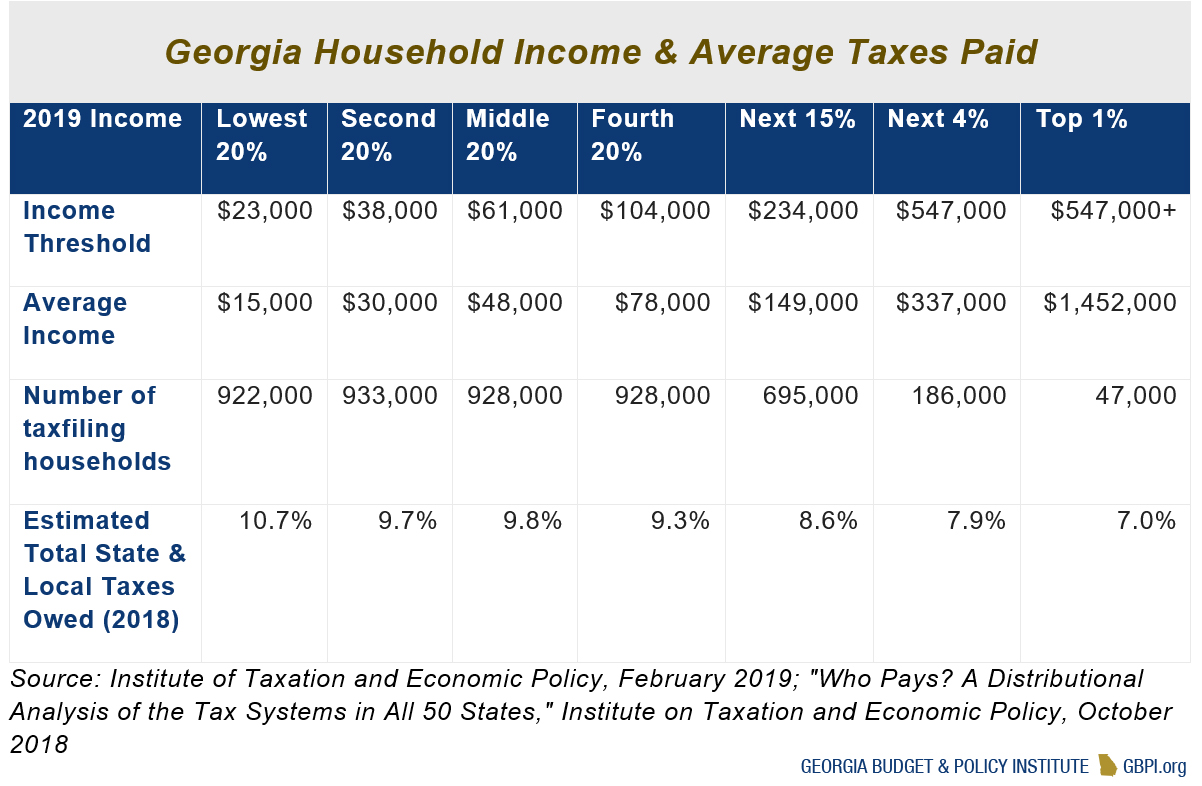 Throughout the tax code, Georgia’s state government offers a variety of exemptions, deductions and tax credits. Few of these measures benefit more than a million working-class families as would the Georgia Work Credit. Across the nation, a bipartisan coalition of leaders have promoted expansions of the EITC because research shows its benefits in incentivizing work, helping families transition into higher paying jobs and allowing those who most need a pay raise to keep more of what they earn.[7] 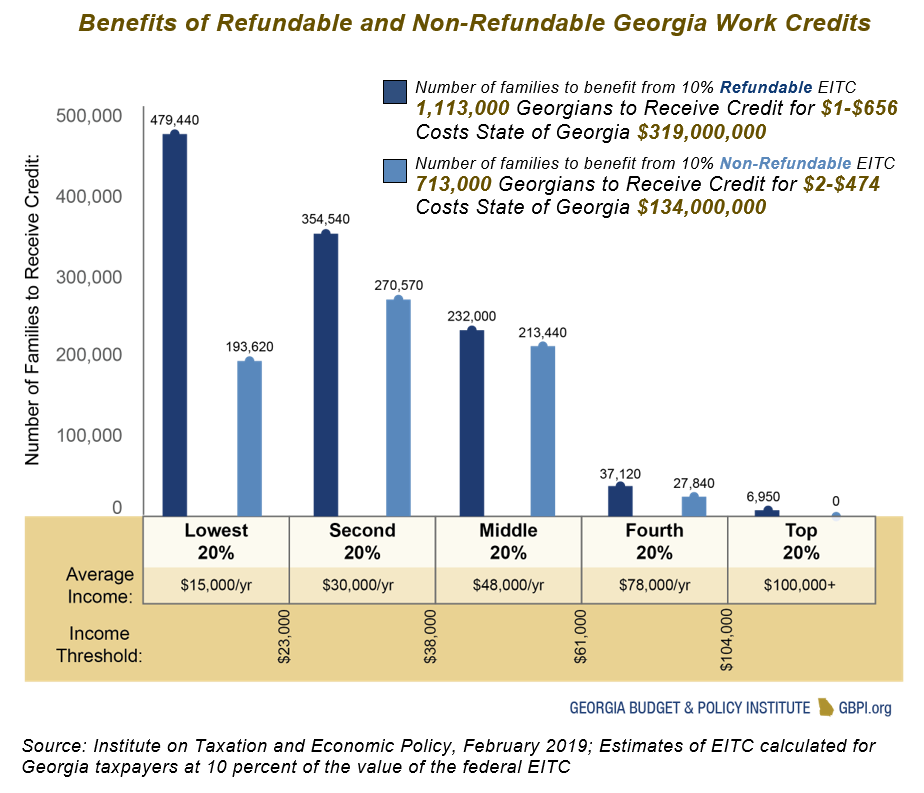 Hundreds of Thousands of Families Could Benefit from Georgia Work Credit

The Georgia Work Credit could cut taxes for up to 1.1 million households that currently benefit from the federal EITC. Offering a refundable credit would reach nearly a quarter of the state’s workforce by allowing Georgians to receive the full value they qualify for – even if it exceeds their income tax liability. A non-refundable credit would generate most of its fiscal impact by providing a targeted income tax cut for families working their way into the middle-class.

Six states—including neighboring South Carolina—offer non-refundable credits that reward families working to reach the middle class. A non-refundable Georgia Work Credit would cut state taxes for more than 700,000 lower and middle-income households by up to $475. The Institute on Taxation and Economic Policy estimates that adopting this policy would be equivalent to investing $130 million annually in Georgia families.[8] 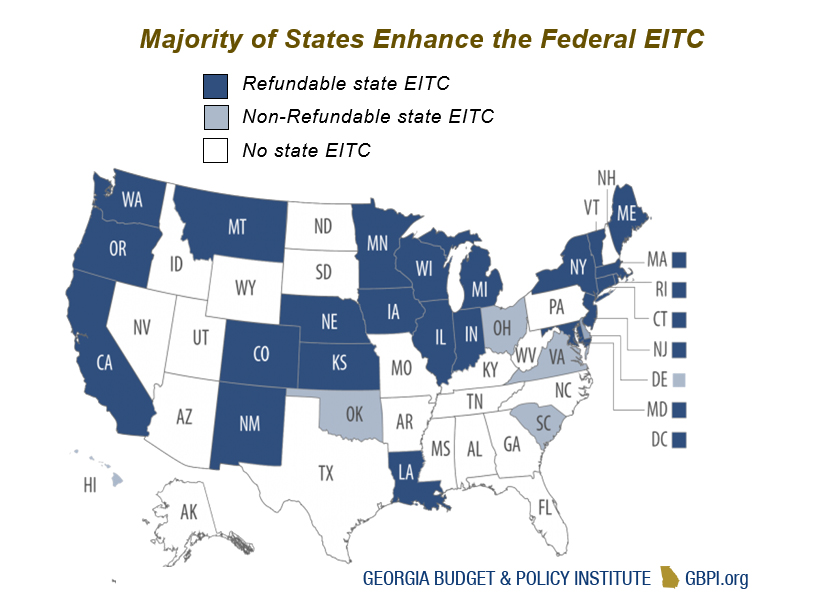 The majority of states seeking to build on the federal EITC’s success enact refundable credits that increase economic activity. A refundable work credit that offers a maximum benefit of $650—or 10 percent of the value of the federal EITC—would cost the state approximately $319 million in FY 2020.[9] Many families pay a significant percentage of their earnings in sales or property tax despite registering at or below the poverty level. Establishing a modest refundable work credit would provide targeted tax relief to these households while carrying a significant benefit for local economies.

Several promising legislative efforts have the potential to deliver either a refundable or non-refundable state EITC for Georgia families. As lawmakers look for opportunities to bolster rural communities, reward work and spur economic activity, the Georgia Work Credit has the potential to generate long-term benefits that significantly move the needle forward for hard-working families.

[6] “Who Pays? A Distributional Analysis of the Tax Systems in All 50 States,” Institute on Taxation and Economic Policy, October 2018