To mark Tax Day, Step Up Savannah Financial Security Director Danielle Breidung explains how tax policy can help working families by exploring the benefits of the Earned Income Tax Credit (EITC).  In this guest blog, she shares how a state EITC could further lift up the Georgia’s 1.1 million families—24% of all households in the state—who currently benefit from the federal EITC.

The Georgia Work Credit proposed in Senate Bill 41 and other legislation would help folks on the margins, including more than 1 million Georgians who struggle to survive and weather life’s inevitable emergencies without having to turn to predatory lending or other forms of inadvisable activity.

There was a lot of buzz in May 2018 about a study published by the Federal Reserve finding that 40% of households in the United States have insufficient savings to cover a financial emergency of $400.  The poverty rate in the United States is only 12%, meaning that a much larger number of families live at risk of financial misfortune every day than just those who are officially “in poverty.” Lacking the resources to cover an unexpected car repair, medical bill or other financial emergencies that inevitably arise throughout life leads to stress, desperate decisions and hardship for children.  Fortunately, people who occupy higher socioeconomic strata, unlike those who live at or below the poverty line, have access to credit, friends and/or family that generally allow them to “find” $400 without turning to predatory lenders or other desperate measures.  The folks we serve at Step Up Savannah and the individuals/families who would benefit from the proposed Georgia Work Credit do not have access to these same supports.  Notably, a proposed state Earned Income Tax Credit (EITC), with a 10% refundable component, would amount to roughly the same amount of money (a couple hundred dollars per household) as the emergencies that too often put families into a downward financial spiral.

The EITC is not a form of welfare; it is arguably one of the most effective poverty reduction policies in the U.S.  This is not to say that many of the families we serve do not lean on public benefit programs, such as SNAP (Supplemental Nutrition Assistance Program), WIC (Women, Infants and Children), or Medicaid.  Counterintuitively, these programs can sometimes disincentivize work.  As hourly wages rise, the corresponding loss in benefits can exceed the relative gain in income, leading to difficult tradeoffs between the pursuit of long-term self-sufficiency and the fulfillment of immediate human needs.  The EITC works very differently by rewarding people for increasing their incomes and offering larger credits until they reach a maximum.  As families continue to work more and move toward the middle class, the amount of the EITC gradually decreases.

While coordinating free income tax assistance clinics for three years, I regularly heard tax-filers telling volunteers that the arrival of their tax refunds represented the only time during the year that they had access to a financial cushion or buffer.  Thus, when there is an influx of financial resources, i.e., a tax refund check, folks use those funds to catch up.  Simply put, the money goes right back into the economy. The fiscal impact of implementing a 10 percent refundable “Georgia Work Credit” would be about $300 million, but the economic impact on small businesses and the state’s economy overall would be much greater due to the economic multiplier effect.

In closing, the Earned Income Tax Credit is a tremendously impactful policy that would help many of the families we serve at Step Up Savannah, including those who constitute “the working poor” as well as those moving toward the middle-class. Enacting a Georgia Work Credit would further help reward working families for hard work. 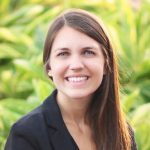 [Danielle Breidung is Financial Security Director at Step Up Savannah. Step Up Savannah, Inc. engages all sectors of the community to improve the economic mobility and financial stability of families in Savannah, Chatham County. Learn more at StepUpSavannah.org]