Table of Contents show
Bill Analysis: House Bill 918 Substitute (LC 34 5383-ECS); Feb. 22, 2018
“Given the substantial uncertainty around the ultimate revenue impact, states should respond cautiously. They also should be prudent because new threats to their fiscal stability loom, including the potential for cuts in federal aid for states and localities and the inevitability of another recession.” – Center on Budget and Policy Priorities
Background: Georgia Stands to Gain About $1 Billion a Year from Federal Tax Plan
Fast-moving House Bill 918 Cuts Income Taxes, Raises Standard Deduction
House Bill 918 Erases New Revenues, Then Cuts Further
Plan Provides Most Taxpayers with a Modest Gain
Tax Plan Risks Stability in Face of High Uncertainty
New Dollars Used for Tax Cuts Unavailable for Schools, Other Priorities
Endnotes

Georgia leaders are now rushing a massive tax package through the state’s General Assembly with limited debate and without a clear tally of the plan’s true cost. Gov. Nathan Deal and legislative leaders introduced a revised tax package Feb. 20, 2018, designed to reduce state revenues by an estimated $1.4 billion a year once fully phased-in.[1] The substitute to House Bill 918 this week is in response to recent news that federal tax changes signed into law by President Donald Trump in December could generate a lot of new state revenue, with some estimates reaching about $1 billion a year. The state’s new plan includes cuts to Georgia’s personal and corporate income tax rates, a revived sales tax break on jet fuel and a doubling of the state’s standard deduction.

Though cutting taxes might sound appealing to lawmakers on the surface, time might prove the plan to be penny-wise but pound foolish. The proposal comes at a time when Georgia’s fiscal future faces an unusually high degree of uncertainty. Eventual revenue collections might fall short of preliminary projections, due to the high level of complexity caused by the federal tax changes enacted in December.[2] An economic recession might lurk around the corner. And Congress is reportedly considering sweeping budget cuts to key services such as Medicaid and food assistance that hold potential to shift large new costs to state taxpayers. Reducing income tax rates also tends to become more burdensome in the long-run than expected, as states like Kansas and Louisiana found out the hard way.[3]

“Given the substantial uncertainty around the ultimate revenue impact, states should respond cautiously. They also should be prudent because new threats to their fiscal stability loom, including the potential for cuts in federal aid for states and localities and the inevitability of another recession.”
– Center on Budget and Policy Priorities

The tax cut plan also cements a stark decision made by Georgia lawmakers to cut taxes rather than boost investment in families and communities. State leaders shortchanged services and investments in education and health care in recent years, investments that are important to the economy and crucial to nurture thriving communities. Lawmakers could instead use at least some of the additional annual revenue to fill these shortfalls and take other public investments to the next level.

Background: Georgia Stands to Gain About $1 Billion a Year from Federal Tax Plan

Changes to national tax laws often affect state revenues. As things stand, the legislation that Congress and President Trump approved in December is projected to increase revenues in Georgia, which links its state income tax system to the federal tax system as most states do, as further explained in our analysis of the original HB 918.[4]

Initial estimates suggest Georgia revenues will increase if lawmakers link state adaptations to federal tax law as usual. The first batch of estimates released by state experts in late January suggested that if lawmakers followed their customary adjustments to federal tax changes, the new law could increase revenues about $735 million a year, on average, over the next five years.[5] Later state calculations pegged the average gain at $940 million a year over that same span.[6] A third iteration form the state raised the estimate to $1.04 billion a year, according to the Atlanta Journal-Constitution. And a separate estimate from the nonpartisan Institute on Taxation and Economic Policy in Washington, D.C. estimates the potential gain at $1.02 billion a year.[7] For context, $1 billion revenue equals about 4 percent of Georgia’s expected tax and fee collections for the upcoming 2019 budget year that starts July 1, 2018.

Most parts of the proposed legislation expire at the end of 2025, which is similar to the federal tax bill signed in December. Lawmakers appear poised to act on the proposal with haste. The governor unveiled the legislation around noon on Feb. 20. The House’s tax-writing committee approved it about three hours later. The House Rules Committee rushed through its gatekeeper responsibilities the next day and scheduled the sweeping tax changes for debate by the full chamber the following day.

The tax plan is likely to reduce state revenues by an estimated $1.4 billion a year once fully phased in by 2020, according to estimates by the nonpartisan Institute on Taxation and Economic Policy.[9] Because the plan is phased in over three years, its total cost is about $5.5 billion over five years. The numbers closely resemble media reports of the state’s own preliminary estimates. An estimated $5.7 billion in revenues might be subtracted from Georgia’s treasury after five years, according to the Atlanta Journal-Constitution.[10]

The tax plan erases roughly $1 billion in new revenue gain otherwise created by the federal tax revision. Then it cuts deeper into Georgia’s existing revenue stream. Rather than gaining about $5 billion over five years, Georgia loses about $500 million over that span. Additional costs could accrue in later years. The gap between what the state gains due to federal tax changes and what it will lose from HB 918 once fully implemented is about $400 million a year, according to the Institute on Taxation and Economic Policy.[11]

Plan Provides Most Taxpayers with a Modest Gain

If Georgia lawmakers used their customary method to align the state tax code to the federal package enacted last December, taxpayers would receive slightly higher state tax bills on average. The tax proposal avoids that by cutting Georgians’ taxes across the board, with a relatively modest reduction for low- and moderate-income people and larger cuts for affluent taxpayers.

For example, a typical family in the middle fifth of Georgia taxpayers, or households with incomes about $46,000, figures to pay the state an extra $122 a year due to the federal changes. The effect of HB 918 is to reduce that household’s Georgia tax bill by an estimated $163 a year in the future. That assumes lawmakers approve the bill’s provision to reduce Georgia’s top rate to 5.5 percent in 2020. The combined effect means that family will pay about $40 a year less in Georgia taxes than before the federal tax law passed. 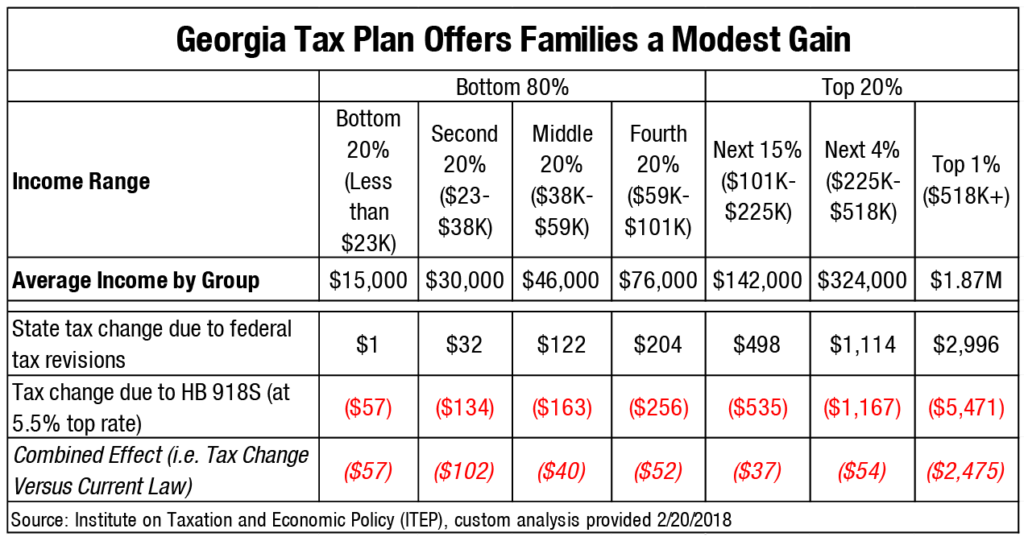 The rush to slash Georgia’s revenue is ill-timed as it coincides with an uncertain fiscal trajectory and carries at least some risk of unintended consequences. Three key points to consider:

Revenue projections based on federal-state tax interactions are guesstimates at best. Serious questions surround the theoretical revenues projected for Georgia due to the federal tax revisions. The wide-ranging nature of the federal changes and the complexity of federal and state tax interaction make calculating potential revenue effects an imprecise exercise.[12]

External factors can jeopardize expected revenues. Other threats to Georgia’s budget also loom on the horizon, such as the potential for sweeping federal budget cuts and the inevitability of another future recession. President Trump’s budget proposal this month makes deep cuts to Medicaid and slashes the Supplemental Nutrition Assistance Program by nearly 30 percent over 10 years.[13] The fallout from these federal cutbacks are certain to put pressure on state budget-writers.

State lawmakers might need revenues for an unprecedented economic development project. Reports indicate that state lawmakers may be prepared to offer more than $1 billion in public subsidies to lure Amazon to choose a Georgia location for its second headquarters.[14]

The tax cut plan also prioritizes modest tax cuts for most families over worthy priorities, such as providing families with quality education and affordable health coverage.

Georgia leaders in recent years consistently shortchanged services and investments important to the economy and crucial to thriving communities. State leaders shortchanged Georgia’s public school funding formula by about $9 billion between 2003 and 2018, for example.[15] And Georgia leaders also continue to claim they can’t afford to expand Medicaid under the federal health care law, which leaves about 240,000 Georgians stranded in the health coverage gap and left about $12 billion in federal dollars on the table.[16]

An influx of $1 billion a year could give lawmakers an opportunity to close these shortfalls and make other pressing public investments. With $1.4 billion a year in state revenue Georgia lawmakers can eliminate the health coverage gap, close the K-12 austerity gap, make technical colleges tuition-free, create a needs-based college aid program, enact a state earned income tax credit and provide universal child care for low-income Georgians under 5-years-old. Those kinds of sweeping changes deserve an open debate that pits them against the need for a modest tax cut.

[1] Estimates by the Institute on Taxation and Economic Policy provided to GBPI upon request, 2/20/2018.

[7] Estimates by the Institute on Taxation and Economic Policy provided to GBPI upon request, 2/20/2018.

[9] Estimates by the Institute on Taxation and Economic Policy provided to GBPI upon request, 2/20/2018.

[11] Estimates by the Institute on Taxation and Economic Policy provided to GBPI upon request, 2/20/2018.

[12] For example, because large segments of the federal tax plan were rushed through Congress and hastily written, taxpayers and accountants will likely find yet-uncovered loopholes that alter initial assumptions about taxpayer behavior and state revenue collections

[14] Gov. Deal indicated last month that lawmakers could reconvene the legislature for a special session if the Amazon question warrants. “Georgia prepares for an unprecedented move to land Amazon,” Atlanta Journal-Constitution.