This month I spoke to a state senate committee about the merits of Senate Bill 15, legislation that could boost Georgia’s minimum wage to $10.10 per hour from its current effective rate of $7.25. The senate bill is similar to a proposal GBPI described in 2014 in our report “Better Pay for Honest Work.” Our analysis finds gradually raising Georgia’s minimum wage to $10.10 per hour over three years raises wages for nearly 1 million Georgia workers, while lifting thousands out of poverty and benefiting families and children statewide. But calls for a higher minimum wage are often met with claims that boosting wages kills jobs and hurts the economy. That’s a common misconception. So let’s set the record straight.

Both the track record of other states and the findings of academic research are clear. Modest increases in the minimum wage have little to no effect on short-term job creation and can even strengthen the underlying performance of the economy in the long run.

First let’s look at evidence from other states. Thirteen states increased minimum wages in 2013, so those states’ jobs performance in 2014 provides a window into whether raising wages hurts employment. The short story is states that raised the minimum wage just before 2014 did as well in the following months as those that didn’t. In fact, they grew slightly faster on average, as shown below. 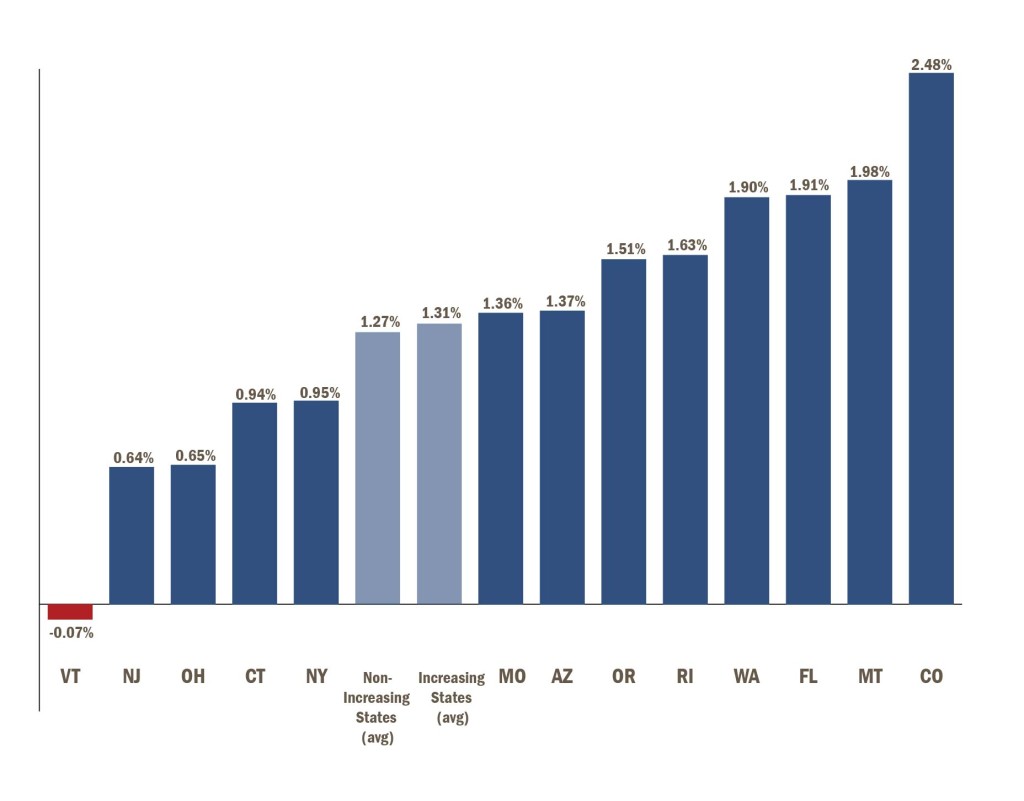 This isn’t surprising. Most mainstream research shows the effect of the minimum wage on employment is small and not always negative. One expert recently reviewed more than 60 studies on the link between jobs and the minimum wage and found some studies show a small negative effect on jobs, but most find no significant impact. Still others find a small positive effect. A 2014 Georgia Budget and Policy Institute study, for example, estimates moving to a $10.10 minimum wage boosts Georgia’s economy, as measured by Gross Domestic Product, by an estimated $812 million and adds about 2,900 jobs over three years.

Most readers are not used to hearing this part of the minimum wage story. But the explanation is pretty straightforward. The core of the issue is the basic economic equation of supply and demand. How do businesses respond to modest increases in the minimum wage – are they supplying more or less employment? And how do workers and customers act when their wages go up – are they demanding more products and services?

Minimum wage skeptics say companies will respond to higher labor costs with immediate job cuts, reduced hours and hiring freezes. But this assumes workers are the most expendable aspect of business success, when the opposite is true. Human capital is the most precious and profitable business asset. Without workers who get the job done right, on time and in a professional manner, companies don’t profit.

That’s why most businesses respond to minimum wage increases by finding other ways to cut costs, such as streamlining backend administration and trimming shareholder return or pay for top managers. Companies cut jobs as a last resort when the minimum wage goes up, rather than as a first response. Phasing in higher wages over a few years is also a good way to help employers adjust without eliminating jobs.

Raising wages also sends a positive ripple effect through the economy by boosting consumer demand. Because low-wage workers usually spend new earnings on core necessities rather than save or invest, higher wages get pumped back into private sector businesses right away. A young woman working at Walmart whose weekly paycheck jumps by $100 is going to spend that money at local shops and restaurants. Businesses that add jobs in response to this new consumer spending more or less cancel out those companies that choose to trim back.

In the long-run, ensuring better wages for working families bolsters the underlying foundation for job creation and business success. Better-paid workers are more productive on the job, more loyal to their companies and better-positioned to save for the future or afford more education for themselves and their children. This is partly why the retail giant Walmart announced last week it is raising the pay of about 500,000 part-time workers to $10 per hour by this time next year. The company expects the higher pay to improve employee morale and productivity and enhance long-term profits for shareholders and owners.

Raising the minimum wage can seem like one of the most controversial issues in state and national politics. But much of the opposition is based on an honest misreading of available evidence. Making Georgia’s wage floor more closely mirror national norms is a solid strategy for improving thousands of lives, minimally affecting businesses and strengthening the economy for the long-haul.