Promises of Economic Growth Through Tax Cuts are Empty

Those pushing for the type of radical tax plans described in our new report say that deep income tax cuts are a sure-fire way to boost the state’s economy and create jobs. But these claims aren’t supported by research or the experience of other states.

A recent review of dozens of economic studies finds there’s no clear consensus on how state and local taxes affect economic growth.  Among the 25 studies reviewed that were published since 2000, 21 find little or no significant effect on economic performance. Many show no connection between state and local taxes and growth at all, while others show that higher taxes can improve economic performance in certain cases. Some find small positive and negative impacts within the same study, depending on things such as the type of tax reviewed and the time period in question. Just a few of the studies show that tax cuts consistently improve the economy. 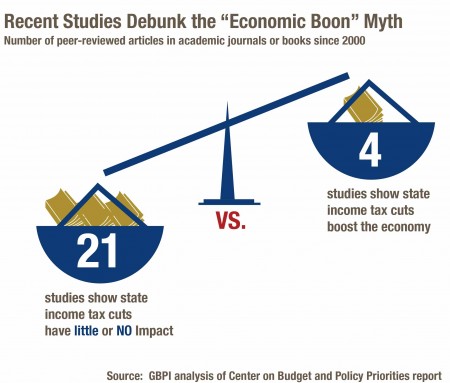 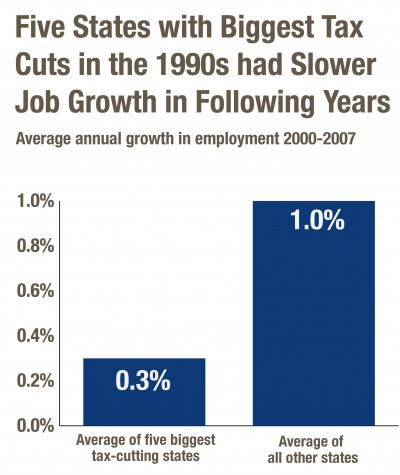 The experience of states that have passed income tax cuts in recent years also fails to support the notion that tax cuts are the key to economic growth. Three of the six states that slashed income taxes prior to the Great Recession, for example, grew more slowly than the nation in subsequent years. Three grew more quickly but all were major oil-producing states enjoying a large upswing in oil prices. Going back to the 1990s, the states with the biggest tax cuts created jobs at one-third the rate of other states and had slower income growth as well.

The claim that extreme income tax cuts boost the economy is in fact based on a handful of deeply flawed studies that have been debunked by independent economists and experts.

For example, one widely repeated claim stemming from an Arthur Laffer report is that “from 2002 to 2012, 62 percent of the three million net new jobs in America were created in the nine states without an income tax.”

But this factoid obscures the fact a single state – Texas – accounted for the vast majority of  job growth in those nine states during that span.

None of the other eight no-income-tax states – Alaska, Florida, Nevada, New Hampshire, South Dakota, Tennessee, Washington and Wyoming – came close to matching Texas’ performance, and five of them contributed 1 percent or less to the nation’s net job growth. Unfortunately, Georgia cannot tap Texas’ abundant supplies of oil and gas or borrow any of the other unique characteristics that have allowed their economy to grow. 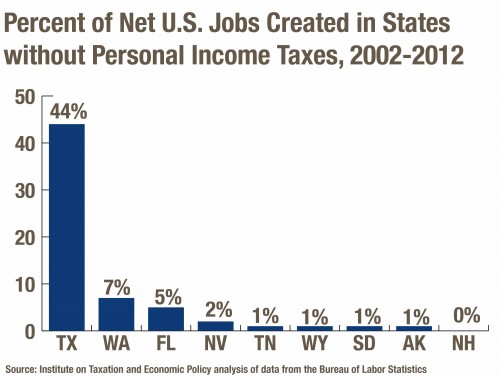 Other analyses show that states with income taxes perform just as well if not better than their no-income-tax peers on many economic measures closely linked to family well-being and business success. The nine states with the highest personal income tax rates have on average more Fortune 500 companies, higher household incomes, higher wages and far smaller shares of people without health insurance than the nine no-income-tax states.

So why is the “economic boon” myth so off-base? Because it rests on a deeply flawed premise that state and local taxes are the single most important driver of economic growth. If that were really true, then Silicon Valley would relocate to Nevada and Wall Street would pull up stakes for Tennessee.

In truth, a state has a strong economy and creates jobs when its total package of attributes makes it an attractive place to start a business and raise a family. Economies thrive in states that have world-class schools and universities to educate new workers and entrepreneurs; well-maintained roads and ports for businesses to get their goods to market; adequate public safety and health services to keep families safe; and high-quality communities with parks, libraries, museums and other amenities.

That’s precisely why Georgia should protect the income tax. A modern and balanced tax system allows lawmakers to maintain key services and meet Georgia’s growing needs over time. Slashing taxes and services to their bare-bones, on the other hand, is an unappealing race to the bottom.