Nine months into the COVID-19 pandemic, Georgia continues to experience a historic and uniquely layered economic recession that shows signs of recovery for some while others face growing financial hardship. These disparities can be seen through a holistic view of the latest economic data, and through the voices of those on the frontlines of this recession. As the end of 2020 nears, underemployed and long-term unemployed Georgians remain unable to support their families; state agencies struggle to serve the public while under austerity cuts; and the economy needs bold and equitable recovery solutions.

Since the COVID pandemic began in March, over 4.1 million Georgians have filed for unemployment. While processing times vary, the level of urgency among unemployed Georgians, and the households they support, remains consistent. One unemployed Georgia resident awaiting her claim decision described “trouble buying needed medications, facing car repossession, having termite infestation and juggling payments to light, water and gas bills.”

Compared to Great Recession job losses that began in 2007 and reached their peak in 2009, unemployment spikes in the COVID pandemic reached an even higher peak within just weeks. From late March until the end of October, nearly eight consecutive months, unemployed Georgians filed more than 41,522 claims per week, which was the highest-peaking weekly number of claims in Georgia during the Great Recession. While some jobs have returned over the last few months, a long road to recovery remains. Meanwhile, Georgians continue to turn to safety net programs at historic levels. 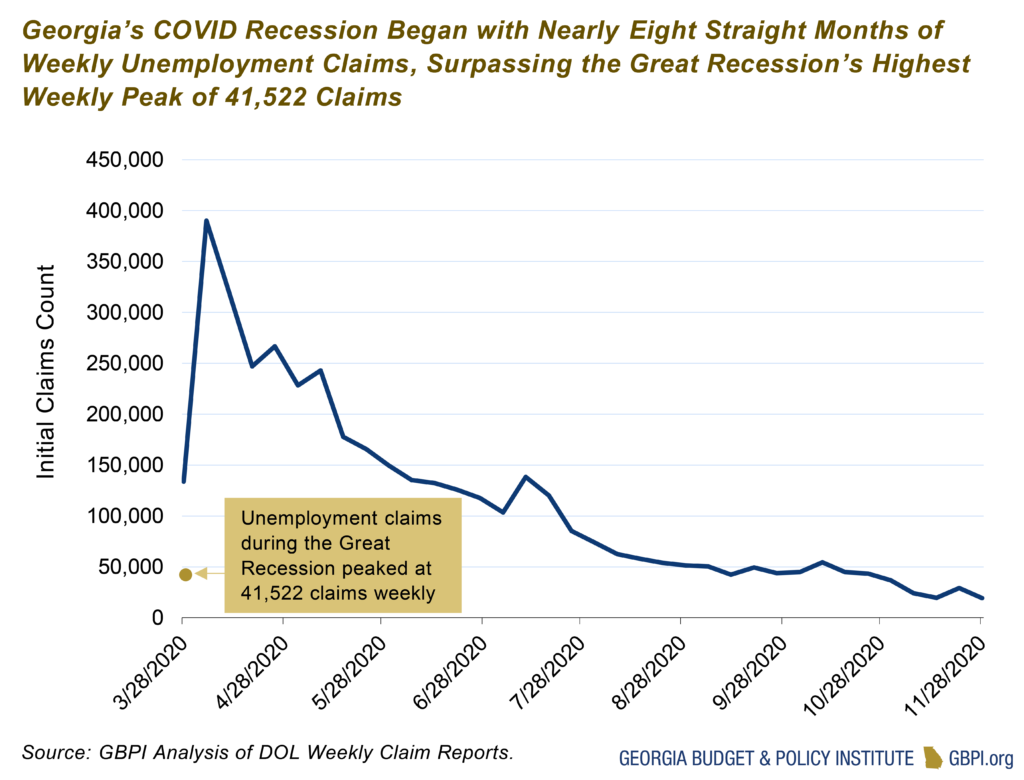 The COVID-19 pandemic has impacted several industries in Georgia. Not including agriculture, over 531,000 jobs were initially lost, while 373,000 have returned since October. The hospitality industry has experienced the greatest impact, initially losing over 223,000 jobs. While 71 percent of those jobs have returned since October, many of them cannot be done remotely. Hospitality workers are also disproportionately represented by people of color and typically perform “essential jobs” which include frontline, close-contact tasks, often forcing them to choose between risking their health and earning paychecks to support their families. 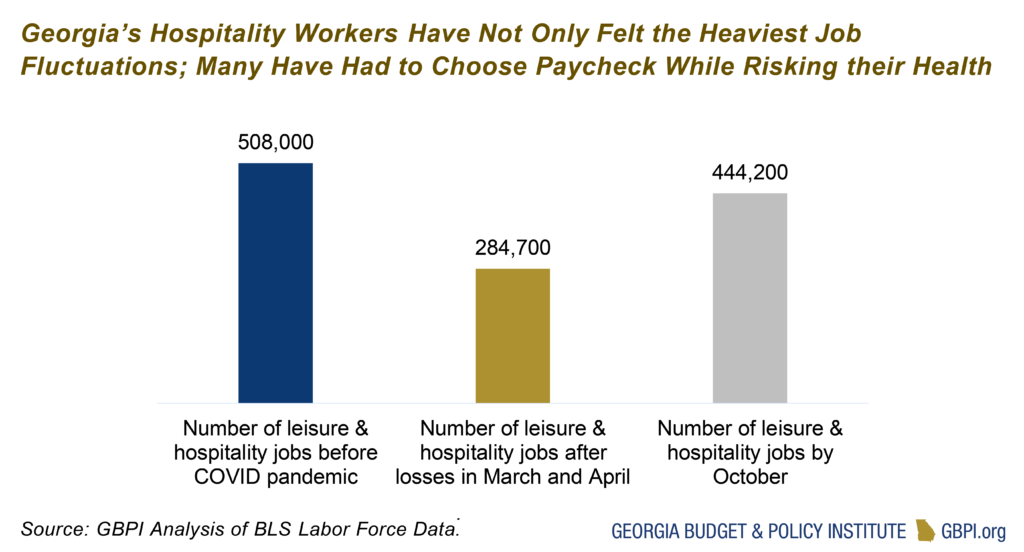 As of October, Georgia’s latest Employment to Population Ratio (EPOP) measure, or share of adults in Georgia who are employed, sits at 58.3 percent, still significantly below normal pre-COVID recession levels that were above 60 percent. This difference signifies hundreds of thousands of Georgians who have exited the labor force and have yet to return because of the COVID pandemic.

Many of the Georgians who have returned to work after being furloughed or who have found new employment are underemployed. Underemployment refers to those who are working less than full-time because of economic reasons. According to the Bureau of Labor Statistics, Georgia’s most recent underemployment measure of 4.4 percent stands higher than the corresponding national rate of 4.1 percent. Disaggregated data has historically shown that for Georgia workers of color, underemployment is much higher. Data from the Great Recession and onward show that Hispanic/Latinx underemployment has been consistently higher than for white Georgians, and Black underemployment has consistently doubled that of their white counterparts. Underemployment typically translates into lower wages and little to no worker benefits such as paid leave or employer-sponsored health coverage, which are particularly critical during a pandemic. 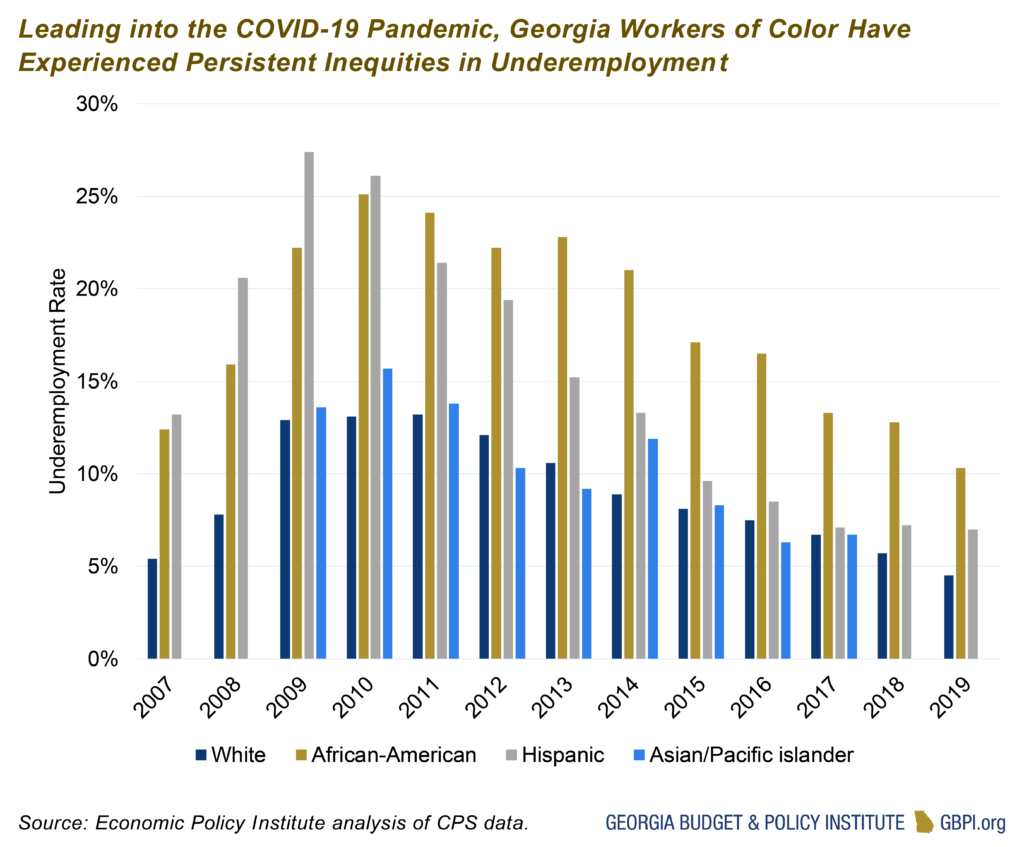 Following eight months of the COVID-19 recession, when unemployment insurance (UI) filings consistently broke Great Recession records, November 2020 UI filings were no longer record-setting, but were still significantly higher than November 2019 pre-COVID levels. Digging further into pandemic unemployment filing trends across race, ethnicity and gender, the experiences and paths to recovery have been anything but equitable for affected Georgians. 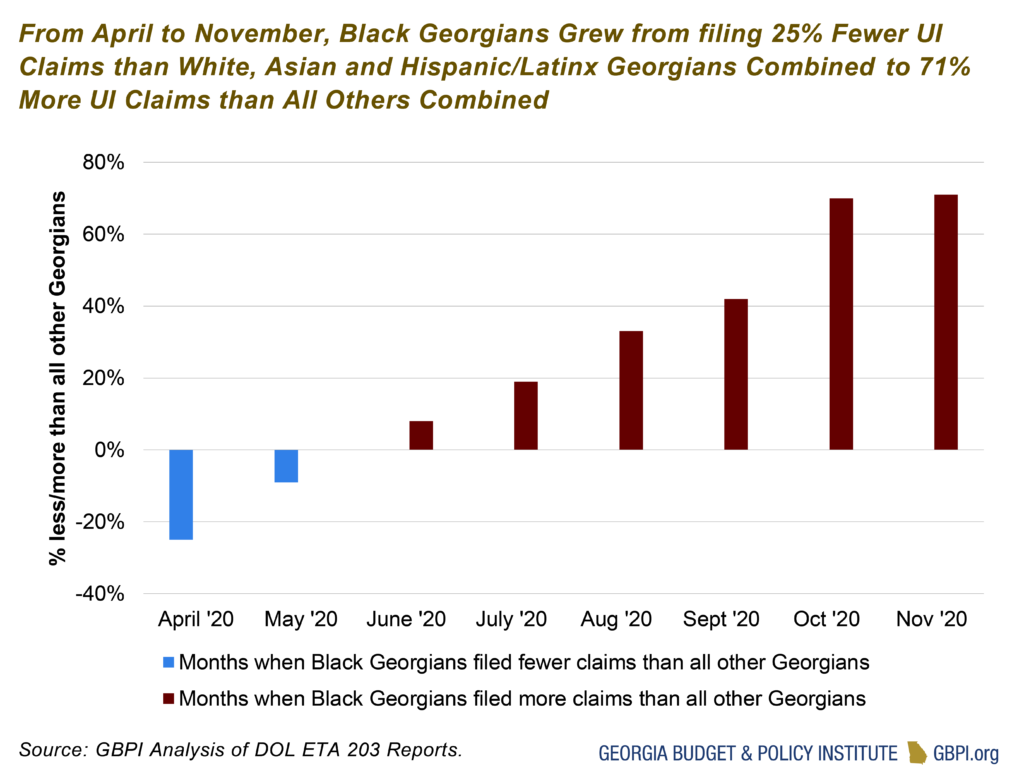 Unemployment disparities have also emerged across gender when comparing Georgia unemployment filing data from a period shortly before the pandemic versus that of April 2020 to now. During the six-month period before the COVID pandemic, October 2019 to March 2020, Georgia women filed 23 percent fewer unemployment claims than Georgia men. However, in the COVID pandemic period of April 2020 to November 2020, this trend shifted, in which women filed 15 percent more claims than men.

While even higher in earlier months of the pandemic, Department of Labor (DOL) enrollment data show that over 408,000 Georgians are currently enrolled and receiving unemployment insurance benefits. This includes those still receiving regular state unemployment benefits, and those receiving Pandemic Unemployment Assistance (PUA) who lost employment as gig workers, part-time workers, independent contractors and church workers. In November 2020, Georgia’s UI enrollment was 10 times higher than it was in November 2019, before the pandemic began.

Along with those currently receiving regular unemployment and PUA benefits, there is a growing population of unemployed Georgians who have exhausted their allotted weeks of regular unemployment benefits, and qualify to receive an additional 13 weeks of Pandemic Extended Unemployment Compensation (PEUC) benefits paid by the federal government under the CARES Act. Although enrollment data is not currently available for unemployed Georgians who have exhausted their regular UI benefits and have qualified to receive PEUC benefits, the latest DOL financial data suggests that enrollment grew significantly in October. From September 2020 to October 2020, PEUC payments to eligible beneficiaries grew by 245 percent. 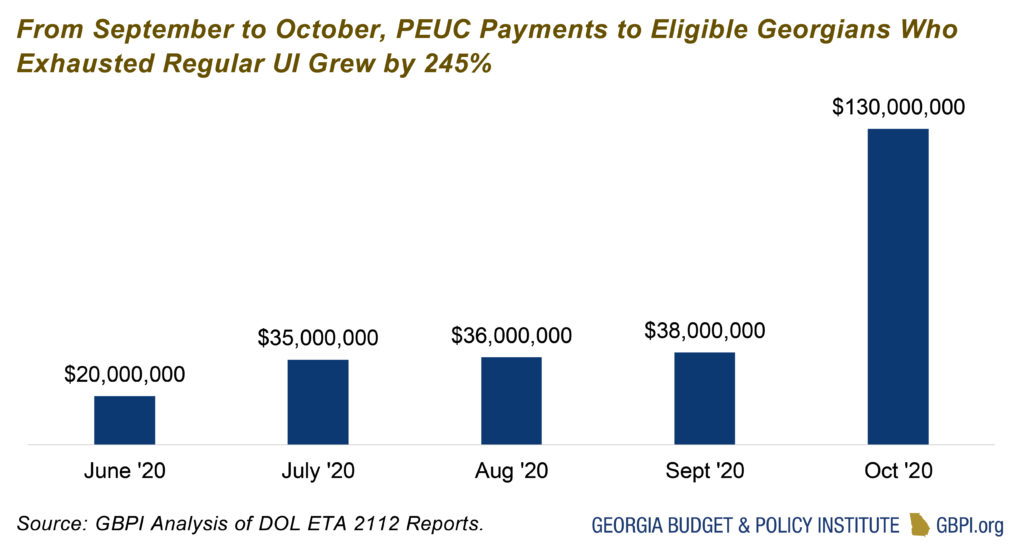 Georgia’s UI enrollment numbers show that despite an unemployment rate that has decreased nearly 5 percentage points since May, and despite the return of some of the jobs lost early in the pandemic, Georgia is far from recovered. In fact, these measures alone do not reveal the historic and persistent long-term unemployment that remains. And as Congress works to negotiate a new stimulus package, they must consider the hundreds of thousands of Georgians who continue to rely on a safety net that may be their only security from homelessness and deep poverty.

One Georgia parent told GBPI, “I can no longer afford child care for my toddler, but unemployment insurance allowed me to attend interviews and dedicate my time to apply for different jobs. There’s no way me and my family can keep our house without this source of income, and we are dreading the end of the help on December 26.” This level of crisis is shared by over 330,000 Georgians, who experts predict will face a benefit cliff if CARES Act relief funding is left to expire.

PUA and PEUC programs expire in a matter of days. Congress must extend funding to these critical programs in the next federal stimulus package. This is the best way to provide Georgia families with vital resources that will support economic recovery as workers regain full employment in an economy that holistic labor measures show is far from a complete recovery.