This weekend marks the return of that semi-annual Georgia tradition, the two-day sales tax holiday, this one for back-to-school supplies. But when state legislators return to work in January 2016, they can seize the chance to bring the misguided tradition to an end. Experts from across the ideological spectrum agree that sales tax holidays provide minimal savings to consumers, overburden small businesses and fail to provide any real boost to the economy. Their existence is largely owed to the fact they “have more political than policy benefits,” as the Institute on Taxation and Economic Policy recently said.

State sales tax holidays allow consumers to purchase specified items tax-free on a few days each year. Georgia held the event for eight years until 2010, took a break in 2011, then reinstated it in 2012. Georgia is one of at least 17 states holding a sales tax-free event in 2015, and one of seven that extend tax-free status to both back-to-school supplies and energy efficient home appliances.

It’s no surprise that sales tax holidays offer politically popular appeal, since the idea of getting a temporary reprieve from sales taxes sounds like a good thing for families at first glance. But if you look at the whole ledger, it’s clear the policy’s costs outweigh its benefits. The bottom line is sales tax holidays cost the state a sizable chunk of change in lost revenue and don’t do enough good to justify that expense.

The holidays cost the state treasury around $40 million each year and city and county governments lose around an additional $30 million. That adds up to real money at a time when Georgia’s state and local lawmakers are struggling to fully fund schools, meet transportation demand and keep rural hospitals from shuttering. Redirecting the funds Georgia loses through its sales tax holidays to these and other public investments could provide real benefit to Georgia families and a real boost to the state’s economy.

In contrast to the cost in lost revenue and potential cuts in services, sales tax holidays provide little direct benefit to consumers. Most families don’t take advantage of the holidays, and the savings for those that do is minimal unless they spend a great deal of money. In some cases families may not be getting as good a deal as advertised, since evidence suggests retailers tend to bump up prices during the event. One study in Florida discovered that up to 20 percent of the price cut consumers thought they were receiving from the state’s sales tax holiday was actually reclaimed by retailers.

Georgians who can’t shift spending very easily usually miss out the holidays entirely. Families that live paycheck to paycheck, elder Georgians and those with disabilities tend to lack the liquid capital to shift several weeks’ worth of spending to a single weekend. Families in households that earn more than $30,000 are far likelier to shift the timing of their purchases to a sales tax holiday than those that earn below that amount, according to one recent study.

Businesses and the economy also see little direct benefit, since consumers that do participate in the holiday typically just shift the timing of their purchase rather than actually spend more than they otherwise would. That means retailers are unlikely to see higher sales than if the holiday didn’t exist, since most consumers would’ve made similar purchases anyway. Consumers simply moving around when they buy things as opposed to how much they buy also delivers no corresponding economic boost to the state. In fact, the holidays can create some additional costs for businesses, especially small ones. Owners and employees must maneuver a complex set of rules that determine which items qualify as tax-free and which don’t. The process is not only cumbersome but can result in new costs like added man-hours or higher risk of audit.

The conservative Tax Foundation agrees that tax holidays are a bad idea: “Sales tax holidays introduce unjustifiable government distortions into the economy without providing any significant boost to the economy,” it says in a 2013 report. “They represent a real cost for businesses without providing substantial benefits. They are also an inefficient means of helping low-income consumers and an ineffective means of providing savings to consumers.”

It’s true that working Georgia families could use a break in the cost to get children clothed and prepared for the new school year, but sales tax holidays don’t provide nearly as much of one as some assume. Lawmakers would be smart to make 2015 the last go-round of this particular Georgia tradition. Policies like investing more in K-12 schools, supporting quality child care or enacting a state Earned Income Tax Credit could deliver a much better bang for the taxpayers’ buck. 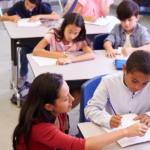