Mother’s Day invites us to reflect on the importance of mothers and show our appreciation for them. One of the best ways Georgia can demonstrate commitment to moms is to bolster their economic opportunities and provide more tools to help their families succeed.

In 2016, the Georgia Budget and Policy Institute released an Economic Opportunity Agenda for Georgia Women, a proactive policy agenda to maximize the earning potential of women and mothers. The agenda illuminated the significant economic potential of Georgia women and recognized the economic status of women as a key factor in the overall health and future of the state’s economy. In a majority of Georgia families with children, mothers are breadwinners who produce at least 40 percent of family earnings.

Promising progress has been made on the policy agenda’s four pillars, but major work remains:

1. Close Georgia’s Coverage Gap by Expanding Medicaid. Following the presidential election, the discussion about Medicaid coverage in Georgia turned from potential program expansion to cuts. While congressional leaders in Washington weigh plans to cut and cap Medicaid, more than 173,000 women remain in a health care coverage gap. Their poverty-level incomes are too high to qualify under Georgia’s strict Medicaid eligibility rules, yet they make too little to qualify for financial assistance under the federal health insurance marketplace. This problem not only remains, but is further complicated by Congressional efforts to repeal and replace the Affordable Care Act. 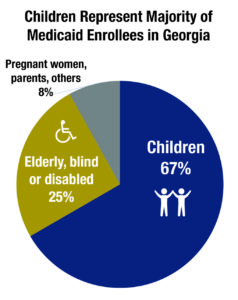 The American Health Care Act, passed by the House of Representatives this month, proposes a $4 billion cut to Georgia’s Medicaid program. This not only threatens the care women receive through Medicaid, including those with disabilities, the elderly or women who are pregnant, but also their children. About 1.3 million children make up more than two-thirds of Medicaid enrollees in Georgia. Consider the story of a student named Joshua, provided by Protect Our Care Georgia. Joshua attends East Georgia State College, enjoys NASCAR and has cerebral palsy. Joshua can live a life of his choosing because of Medicaid, which provides him with a caregiver to help him prepare for college each morning and assist him on campus. For his mother, Medicaid means she can go to work each day and support her family.

2. Expand Child Care Assistance. Child care assistance is crucial to Georgia mothers as it helps them balance disproportionate caregiving responsibility for children. Child care costs can deplete nearly 40 percent of a low-income family’s budget. The state’s child care assistance program served about 50,000 children in 2016, while there were more than 680,000 children in low-income working families likely in need of affordable, quality care.

Thankfully Georgia’s governor and legislators added $5.5 million to the 2018 budget for the state’s child care subsidy program – the first new state money for child care assistance in at least 10 years. The funds will incentivize providers in the subsidy program to increase the quality of care they provide. This helps mothers focus on work without worrying while their children receive quality early learning that will better prepare them for school. This new investment is an exciting development, but more resources are needed to ensure mothers have access to this same work support.

In the 2017 legislative session, House leadership included a Georgia Work Credit in a broader tax bill and representatives sent it to the state Senate to consider. The Georgia Work Credit didn’t survive the late-session negotiations between the chambers, and the broader tax package died on the last day of the session. The EITC enjoyed broad support from lawmakers on both sides of the aisle this session. We anticipate that momentum and support to grow and the EITC to have a good shot at becoming law in 2018. 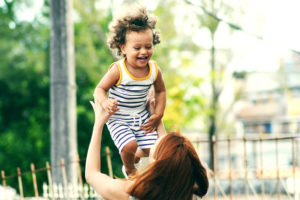 4. Raise the state minimum wage. Increasing the state’s minimum wage to $10.10 per hour from its current rate of $5.15 per hour would raise wages for nearly 500,000 women and 244,000 parents in Georgia. It would also put $342 million more into the hands of women who are likely to spend it immediately to support their families and pay for basic necessities. Unfortunately, no bill to raise the state’s minimum wage advanced in the Georgia General Assembly in the 2017 legislative session.

As we reflect on and appreciate the mothers – and women – in our lives who have put the needs of others ahead of their own, these are four specific, evidence-based policies that could make a difference. Georgia can take these four steps – protect the structure of Medicaid and expand the program, invest more resources into quality child care, enact a state earned income tax credit, and raise the minimum wage – to show both appreciation and boost the state’s economy in the process.