Each year, the Georgia Budget and Policy Institute analyzes tax legislation passed by the General Assembly and tallies estimated costs and new revenues in our two-part Adding Up the Fiscal Notes series. This analysis is a snapshot of the legislative state of affairs as of July 1, 2020.

During the 2020 legislative session, lawmakers sent relatively few tax measures to Gov. Kemp’s desk before adjourning from a legislative session that was dominated by debate over $2.2 billion in budget cuts that ultimately reduced funding by 10 percent for most state agencies. A number of factors made legislators’ work difficult: Georgia’s largest revenue source has been weighed down by a delayed 2020 tax filing date and record-high jobless numbers; corporate income tax collections are expected to fall by nearly 50 percent; and depressed consumer spending continues to negatively impact sales tax revenues and motor fuel tax collections.

Source: Governor’s Office of Planning and Budget.
Note: Ancillary revenue categories not included, so numbers in columns do not add up to total in last row. 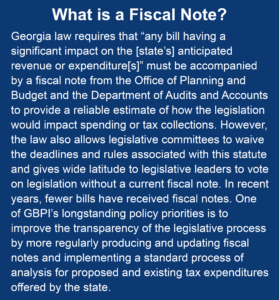 In the face of these challenges, members of the General Assembly rejected almost all proposals to add to the billions that the state already forgoes each year in special interest tax breaks and even debated legislation that would have rolled back some tax expenditures. However, largely because of updates passed to bring the state’s tax code in line with federal tax changes made during the pandemic response, Georgia will raise about $77 million less in Fiscal Year 2021 than it otherwise would have without the combined effects of the 11 bills passed.

The vast majority of tax bills passed this session are not accompanied by a fiscal note to assess the potential costs to the state because the fiscal impact was determined to be too low to require an analysis, due to significant uncertainty around how legislation would be implemented or because lawmakers simply did not request one. Of the 11 tax measures that passed at least one chamber, only three bills were accompanied by current fiscal notes that fully reflected the revenue effects of the legislation.

Members of the House and Senate advanced legislation to exempt Hurricane Michael relief funds from state income taxes, eliminate the sunsets for a set of minor sales tax breaks and make minor improvements to the administration of the film tax. Legislators also approved a constitutional amendment that voters will consider in November 2020 to allow future General Assemblies to statutorily dedicate fees for specific purposes. Importantly, the enabling legislation includes a provision that would allow the state to divert those funds in the event of a fiscal emergency or recession.

Before the COVID-19 pandemic hit, members of the General Assembly agreed in January to send House Bill 276 to the governor’s desk to begin collecting long-overdue revenues from “marketplace facilitators,” which include retailers that list items on sites like eBay or Walmart.com. Fortunately, Gov. Kemp signed the bill into law, and it took effect in April, providing a much-needed boost to state revenues in time to capture the significant share of commerce that was shifted online during an unprecedented statewide lockdown order. 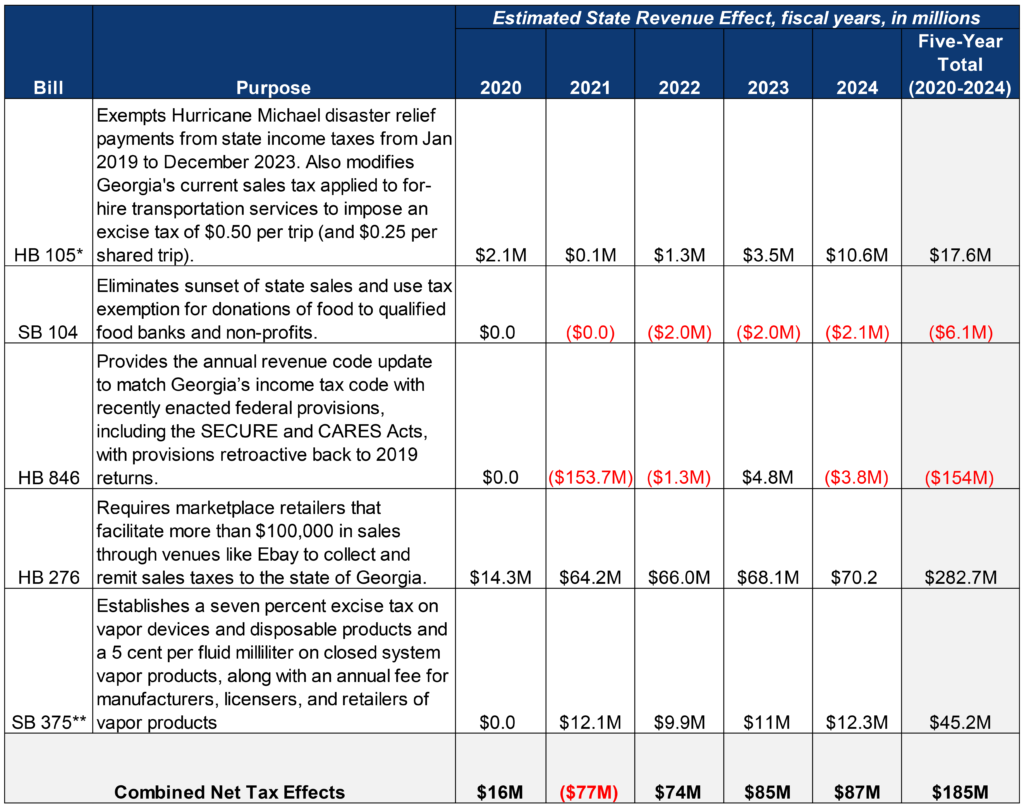 Members of the Senate’s tax writing committee advanced several other measures that could have further helped the state avoid the $2.2 billion in budget cuts that will be implemented during the 2021 fiscal year. These cuts underfund K-12 public schools by $950 million and affect supports for Georgians with disabilities, higher education programs, supports for families with low incomes and more. Prior to the pandemic, the full Senate passed Senate Bill 302 unanimously to help lawmakers and members of the public determine the value of the billions of dollars the state forgoes each year due to special interest tax breaks and industry-specific tax credits. The measure was not considered for a vote by the House of Representatives.

The Senate Finance Committee also advanced bipartisan legislation to raise the state’s low cigarette tax to $1.35—which would still put Georgia below the national average of $1.82, but would significantly improve upon our state’s current national ranking of 49/50 (No. 50 if District of Columbia is included) at 37 cents per pack.[1] Finally, the Senate Finance Committee and Senate Rules Committee each advanced different versions of House Bill 1035 that would have scaled back hundreds of millions in annual tax exemptions. Both of these bills were ultimately left on the table, with state legislators instead opting to pass a $25.9 billion budget for Fiscal Year 2021 that will cut $2.2 billion in spending, primarily in cuts to education and health care that will disproportionately affect communities of color, while also deploying $250 million from the state’s Revenue Shortfall Reserve.

Overview of Tax Bills Passed During the 2020 Session

House Bill 105: Exempts Hurricane Michael disaster relief payments from state income taxes from Jan 2019 to December 2023. The bill also adds a new exemption to Georgia’s sales tax and instead assesses an excise tax on for-hire transportation services at a rate of $0.50 per trip (and $0.25 per shared trip). The legislation calls for the full amount raised by the excise tax to be appropriated for transit. If the full amount of funds raised by the excise tax are not appropriated to a transit provider, HB 105 includes a provision that calls for the excise tax on ridesharing to be repealed. The legislation also allows up to 10 percent of the fees collected by the state’s $5-per-night hotel/motel tax to be appropriated for public transit projects.

House Bill 276: Requires marketplace retailers and apps that facilitate more than $100,000 in sales through venues like Etsy or eBay to collect and remit sales and use taxes to the State of Georgia.

Although there is not a full fiscal note, state officials estimated that the legislation’s provisions will reduce annual revenues by approximately $154 million in Fiscal Year 2021.[2] The bill creates a new state income tax credit for manufacturers that produce personal protective equipment (PPE) and becomes effective on January 1, 2020 and expires in 2025. Also included is a provision allowing employers eligible for the state’s job tax credit or quality jobs tax credit to receive, during the 2021-22 tax years, credit for the same number of full-time employees claimed in 2019. The state revenue code update will reduce revenues by a state-estimated $154 million in FY 2021. The following provisions were included in that calculation:

House Bill 1102: Authorizes counties currently imposing a Homestead Option Sales Tax (HOST) to put forward a replacement sales and use tax (RHOST) if 10 percent of that county’s voters from the previous election petition to do so. If enacted, 99 percent of the proceeds from the county’s new HOST must be distributed to each municipality and used to roll back ad valorem (proportionate) property taxes.

House Resolution 164: Proposes constitutional amendment to authorize the dedication of revenues generated from taxes or fees. For example, the provisions of House Bill 105 attempt to dedicate fees raised from the state’s new ridesharing excise tax for transit by including a provision to provide for the repeal of the tax if the proceeds are not appropriated for transit projects. Currently, there is no mechanism to dedicate revenues to fund a specific program without amending the state constitution, as was done to create the lottery for education. Importantly, this legislation includes an exemption if the state experiences three consecutive months of declining revenues or an overall shortfall greater than 3 percent of the previous year’s revenue collections. In those cases, the Governor or General Assembly may temporarily suspend the dedication of any revenues.

Senate Bill 375: Adds additional penalties for the retail of tobacco products to Georgians under 21 years of age and provides for a regulatory process for the sale of vapor products. Establishes an excise tax of five percent per milliliter on closed system vapor products and seven percent of the wholesale cost of vapor devices and non-refillable products.

Senate Bill 410: Allows appeal administrators of county boards of equalization, which help ensure accurate property tax assessments, to conduct hearings by audio or video conference and authorizes taxpayers to recover costs of litigation and attorney’s fees for appeals made where the final determination of value is 85 percent or less of the value determined by the board of assessors. Also requires electronic transmission of tax returns by public utilities.

During the 2020 fiscal year, Georgia’s revenue collections fell short of official estimates by about $1.2 billion, causing the state to draw drown heavily on its Revenue Shortfall Reserve to balance the budget. Once all tax payments are collected through the delayed July 15 income tax filing deadline, the state is expected to close out the 2020 fiscal year with the Revenue Shortfall Reserve at a higher level than its current estimated balance of $1.26 billion, but still down significantly from the $2.8 billion with which the state started fiscal year 2020. Looking ahead, significant uncertainty remains as the state continues to experience record levels of jobless claims, a resurgence in COVID-19 infections, and a multitude of other economic pressures, such as lower levels of demand for international trade and reduced airport traffic.

To avoid replicating the 2010-2019 decade of austerity experienced by Georgia’s public schools and to avert deeper cuts when the General Assembly reconvenes in January, lawmakers should focus on eliminating waste in the tax code, reject Georgia’s status as an outlier in the tobacco tax and work to eliminate narrow, low-return tax breaks that offer special benefits to high-income taxpayers and corporations. These proposals are explored in GBPI’s People-Powered Prosperity campaign, which details a vision for how state lawmakers can pursue strategies to help Georgians recover from times of economic uncertainty, close racial inequities and thrive, as well as how the state can responsibly pay for the services our families rely on.

[3] Cost estimates are sourced from the Georgia Tax Expenditure Report for FY 2021, which is prepared by Georgia State University on behalf of the Department of Audits and Accounts.

ATLANTA—Today, the Georgia Budget and Policy Institute announced the hiring of Dominique Derbigny Sims as