The U.S. Census Bureau will release its estimates of 2011 health insurance coverage from the Current Population Survey (CPS) on the morning of Wednesday, September 12.

In the afternoon, following the Bureau’s Current Population Survey release, the Georgia Budget and Policy Institute will provide a news release summarizing and analyzing the Census estimates on health insurance coverage for Georgians, including uninsured rates for all residents, uninsured rates for children, and employer-sponsored health coverage rates.

Later this month, on September 20, the Bureau will release additional health insurance, poverty, and income data from the American Community Survey (ACS).

Although the data from these two surveys are similar, they differ in important ways and will likely yield somewhat different numbers. 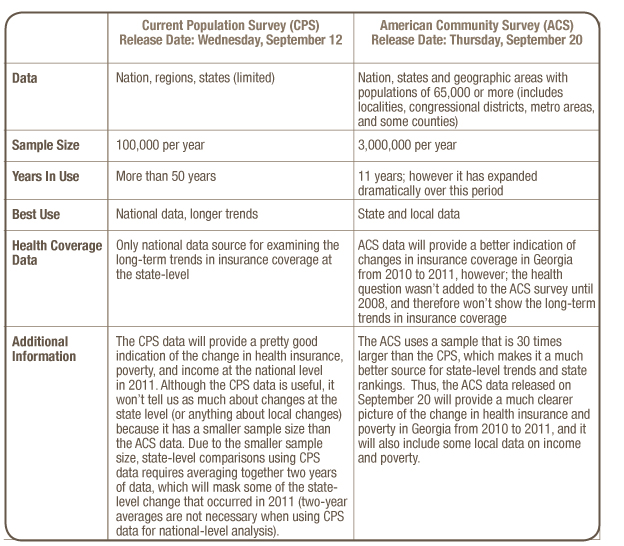 For additional information on the differences between the two surveys and understanding Census estimates of the uninsured, see GBPI’s Guide to Census Data for Georgia Journalists.

Other Data from Census Sources

National and some state-level poverty and income data from the Current Population Survey will also be available from the Census Bureau on September 12.  However, for several years, the Census Bureau has advised that data from the American Community Survey (ACS) should be used for state-level poverty and income estimates, rather than the CPS data.  This is because the American Community Survey surveys more people than the CPS and offers a more reliable measure.  Therefore, GBPI will not report on state-level CPS poverty and income data on September 12, unless there is a statistically significant change.  (We will have these data available for reporters on request.)

Media interviews are welcomed on both days of the data releases to help provide context and interpretation of the numbers. If you have questions regarding the methodology or what kinds of data will be available (e.g. geographic areas, changes over time, etc.), please contact Utoia Wooten, Communications Director at (404) 420.1324 ext. 109 or uwooten@gbpi.org.

The Georgia Budget and Policy Institute is a research-based, independent, nonpartisan, nonprofit organization that strives to raise the level of public policy debate in the state of Georgia. GBPI uses research, analysis and education to advance policies and practices that improve the quality of life for all Georgians.