Table of Contents show
1) A narrow sliver of rich Georgians receive a windfall, while the bottom 60 percent eventually see higher taxes on average.
2) Georgia is one of 19 states that will contribute more under new tax rules than they do today.
3) The sweeping tax cuts blow a hole in the federal budget, swelling the deficit and debt and threatening key services.
4) The tax package is also now a health care repeal bill.
5) Some important deductions for students, seniors and local governments remain at risk.

The U.S. Senate is set to vote as soon as this Thursday on a major tax package that poses serious risks to regular Georgia families and the state’s future prosperity. Bottom line, like its House counterpart, the current plan includes a massive corporate tax cut, a big new loophole for wealthy investors, a dramatic expansion of the national debt and changes to several tax deductions that could leave lots of middle class families paying more. It also includes a backdoor maneuver to undermine the federal health care law, which could add an estimated 13 million more Americans to the ranks of the uninsured.

Here are five things Georgia voters and lawmakers should know about the Senate plan before this week’s vote.

1) A narrow sliver of rich Georgians receive a windfall, while the bottom 60 percent eventually see higher taxes on average. 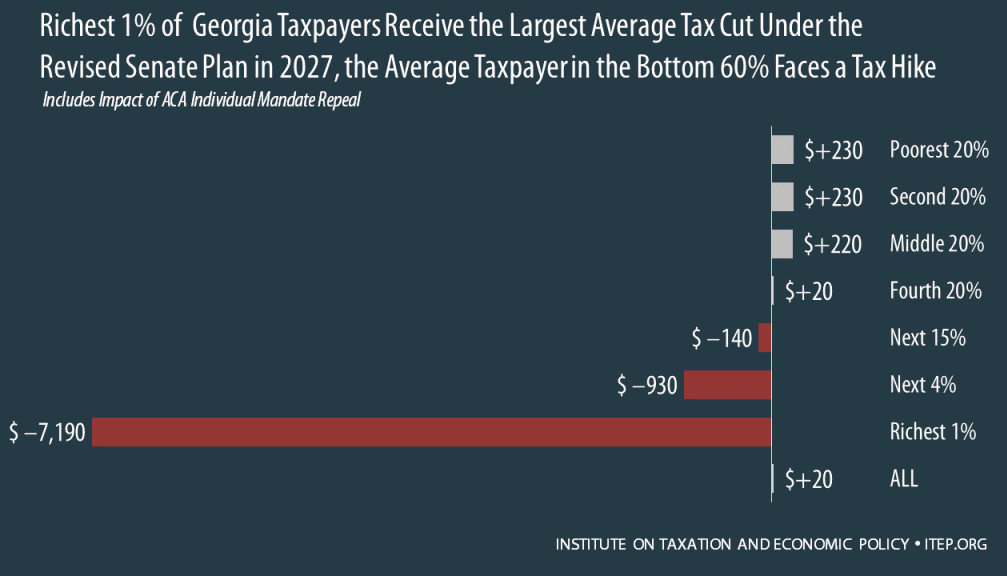 The core of the federal tax plan is a large, permanent tax cut for corporations alongside more modest, temporary tax cuts for individuals. But after a decade, when many of the bill’s provisions for families are set to expire, Americans at the top still get large tax cuts, while regular families would face tax increases on average. In Georgia, the Senate plan offers the top 1 percent an average tax cut of $7,190 per household. Compare that to the bottom 60 percent of Georgians, or families with incomes of about $62,000 or less today, who could wind up with average tax hikes of more than $200 each.

2) Georgia is one of 19 states that will contribute more under new tax rules than they do today. 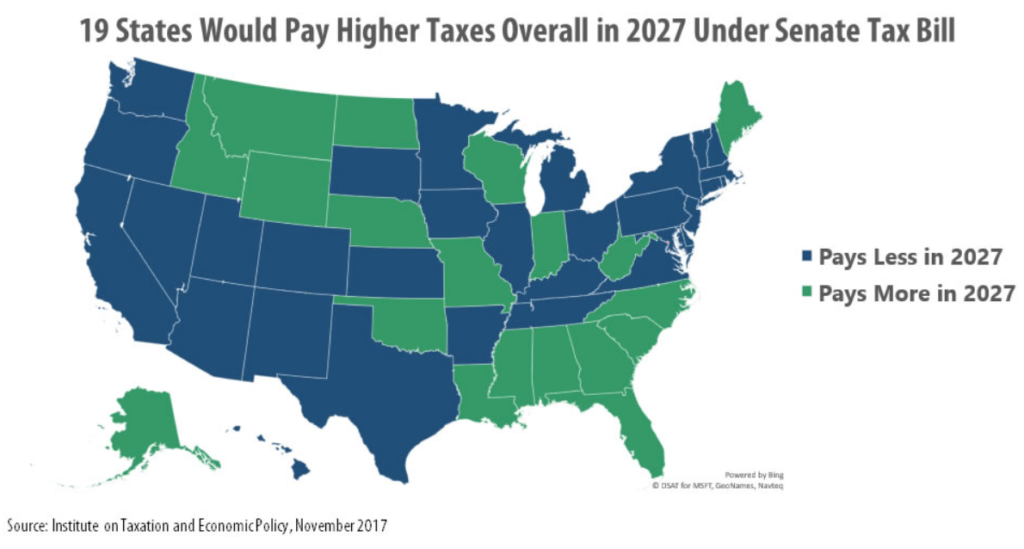 Some commentators say the federal tax package aims to harm so-called blue states, such as California and New York. Those are places where taxpayers experience disproportionate benefit from certain tax breaks like the state and local tax deduction that are set to be scaled back. But the nuances of the Senate plan wind up putting a far wider group of states in the crosshairs. Georgia is one of 19 states where residents would wind up paying more down the road, specifically an extra $135 million in 2027.

3) The sweeping tax cuts blow a hole in the federal budget, swelling the deficit and debt and threatening key services.

The U.S. Treasury stands to lose about $1.5 trillion over the next decade from the tax cuts, or an average of $150 billion a year. For context, $150 billion a year is equivalent to five times what the federal government spends on Pell Grants, which help 270,000 low- and moderate-income Georgians attend college. It’s also about 50 times what Congress spends annually on national parks. Adding that amount of money to the nation’s credit card is likely to jeopardize near-term funding for crucial investments in education, health care, infrastructure or other services, as well as create pressure for more slashing in the long run. 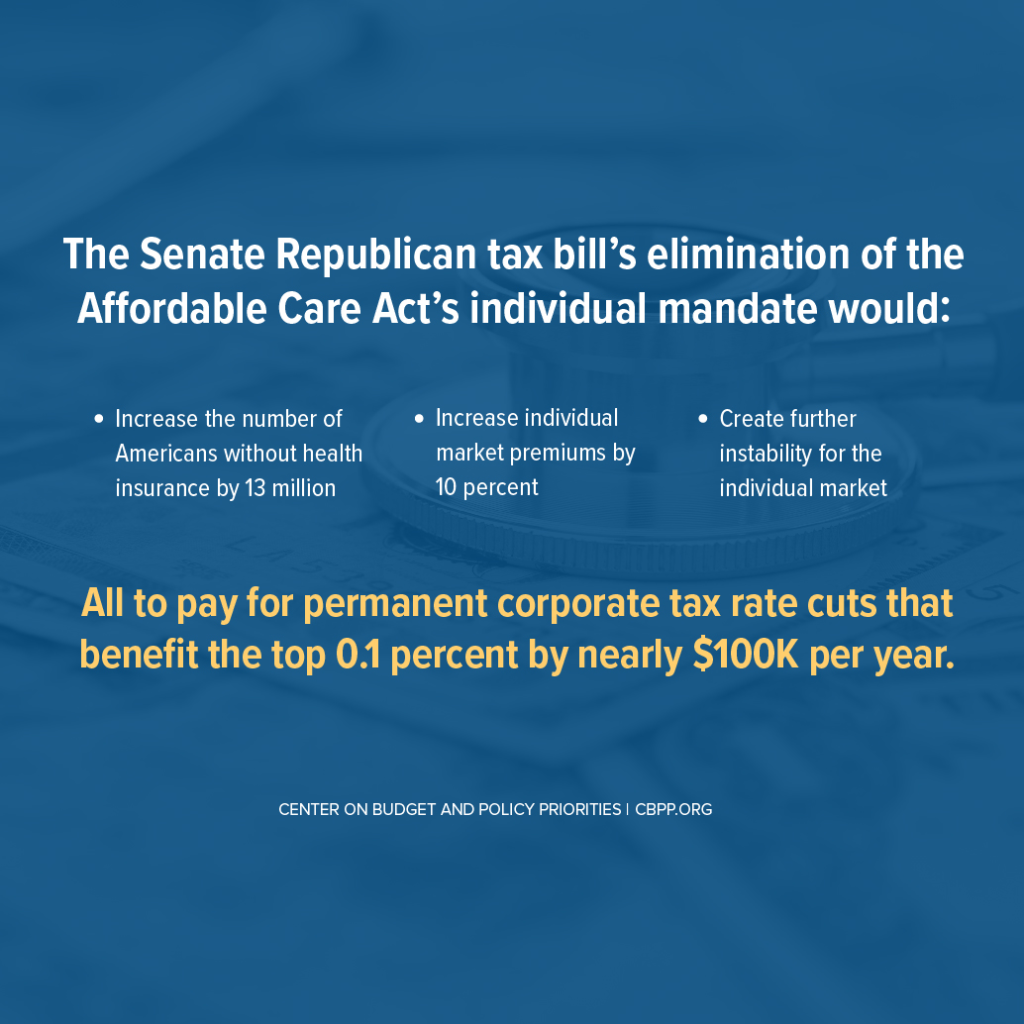 After the failed effort to roll back the federal health care law and slash Medicaid this summer, Congressional leaders are sticking a proposal into the tax bill that eliminates the requirements for all Americans to carry health insurance. That backdoor maneuver could cause 392,000 Georgians and 13 million Americans to lose their health coverage over a decade, as well as push up premiums on the individual market by an estimated 10 percent. A 64-year-old in Georgia could eventually see a premium hike of about $1,452 a year according to the AARP.

5) Some important deductions for students, seniors and local governments remain at risk.

The U.S. House and Senate each have their own variations of the tax plan. The House-passed package eliminates a deduction essential to graduate and doctoral students, which could cause their yearly tax bills to rise by thousands of dollars. It also slashes the deduction for extraordinary medical expenses, a move that’s fiercely opposed by advocates for seniors, and rolls back an obscure deduction that helps state and local governments finance large long-term projects. The Senate’s tax plan maintains the status quo on these measures. Nonetheless, late-hour negotiations on Capitol Hill are unpredictable so these and other items remain open for debate until the ink is dry on a final deal.

Concerned that this week’s vote in Congress means bad news for your neighbors or Georgia’s future success? Then share your concerns with the two Georgians most able to influence the process for the better, our U.S. Senators. You can reach Sen. Johnny Isakson at 202-224-3643 and Sen. David Perdue at 202-224-3521.

Let them know that the current plan does little to help hardworking Georgia families. It offers a huge tax break for people and companies getting a good deal in the current system, with little gain to workers or entrepreneurs and the state’s the economy. Rather than moving forward on the current bill, Congress should go back to the drawing board and find a better way.