Each year, the Georgia Budget and Policy Institute examines all tax bills considered by the state Legislature and tallies potential lost revenue as part of our two-part Adding Up the Fiscal Notes series. This report’s analysis reflects the costs of tax bills signed into law by Gov. Nathan Deal as of his deadline for signing or vetoing legislation, May 3, 2016. The first part of the series, tallying costs as of Crossover Day, is available at www.gbpi.org.

Gov. Nathan Deal just signed into law several pieces of tax legislation state lawmakers passed in the 2016 session that will affect state revenue to varying degrees for years. One of the bills is a housekeeping measure Georgia must pass each year to link to tax changes on the federal level. The other bills include a laundry list of 10 different tax breaks for large economic projects, Super Bowl tickets, donations to struggling rural hospitals and other causes.

The budget cost attached to these tax breaks is relatively modest compared to many prior years and fell considerably over the final days of session, after lawmakers pared down the most expensive proposal. Georgia also dodged a bullet as House leaders chose not to advance a pair of Senate-passed income tax bills that threatened to cost more than $2 billion in lost state revenue over the next five years.

The housekeeping measure, technically known as the Internal Revenue Code Update, will reduce state revenue by another $80 million or more annually through the 2020 budget year.

The first tax bill approved by the Legislature and signed by the governor is this year’s Internal Revenue Code Update, House Bill 742, a housekeeping bill lawmakers pass each year to align Georgia’s tax code to federal tax changes from the prior year. This year’s version reduces state revenue by $80 million or more each year through the 2020 budget, as detailed in the chart that follows. Most of the costs are due to some federal corporate tax breaks Congress made permanent this year. Because Georgia, like many states, piggybacks off large swaths of federal income tax law, these changes trickle down to reduce state revenues too.

The 10 tax breaks included in the first section below will cost an estimated $471 million over the next five budget years. The aforementioned housekeeping measure, HB 742, is listed separately.

Sources: Whenever available estimates are taken from official fiscal notes as presented by the Department of Audits and Accounts. Other sources include bill text and Georgia’s Official Tax Expenditure Report for FY 2017.
Notes: (a) The quality jobs credit as currently structured cost an estimated $35 million in the 2016 budget year. The official fiscal note for HB 922 states “we do not have sufficient information to provide an exact revenue cost associated with this provision other than to state [it] will have a negative impact…” and “the pool of potential beneficiaries of this proposal may be large.” (b) Some tax breaks passed after lawmakers attached them to other pieces of legislation, specifically: *Rural hospital credit originally proposed as HB 919 and passed as part of SB 258; **Goodwill sales tax break originally introduced as HB 924 and passed as part of SB 379; ***Tax credit to hire parolees originally introduced as HB 828 and passed as part of HB 936. For more information on these original bills, view part one of GBPI’s Adding Up the Fiscal Notes 2016 edition “Tax Breaks, Income Tax Cuts Could Harm Georgia Finances.” 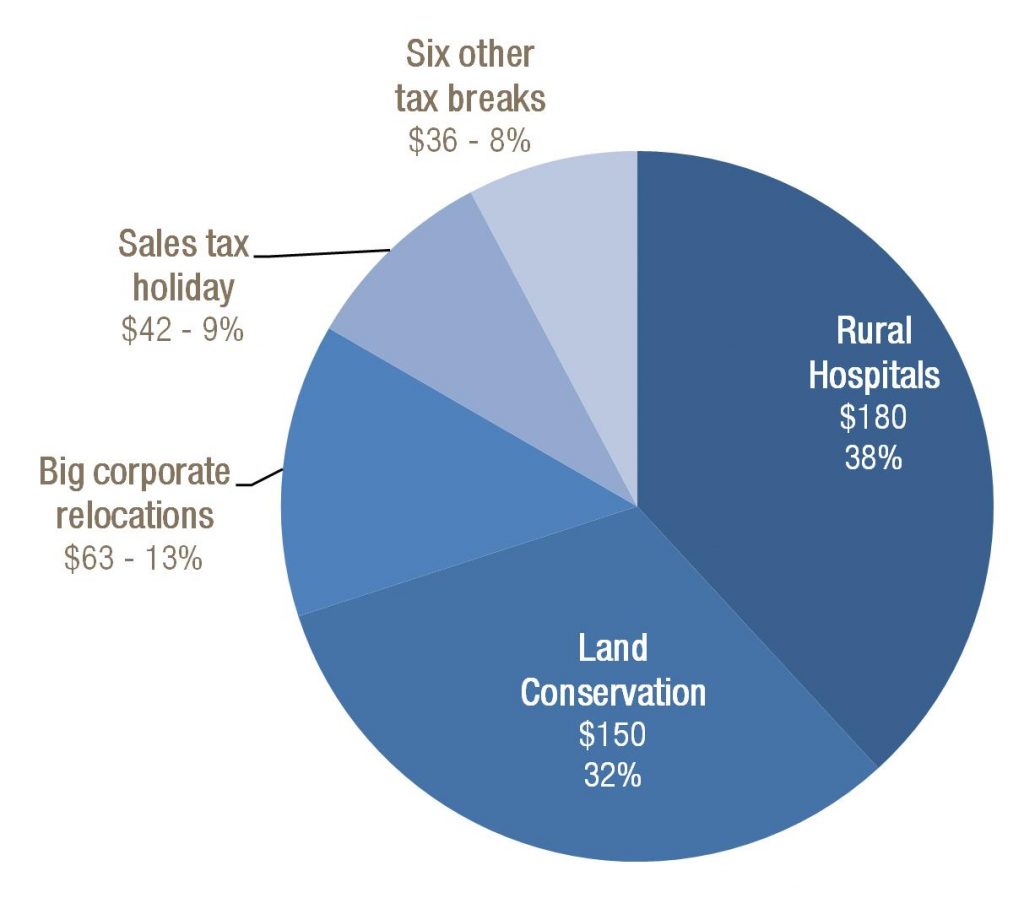 Senate Bill 258 creates a new income tax credit for taxpayers who contribute to rural health care organizations, a new kind of incentive to direct funds to Georgia’s rural hospitals. Designed to operate like Georgia’s income tax credit that directs money to private school scholarship organizations, the credit carries an average cost to the state treasury of $60 million a year for three years beginning July 1, 2016. That $180 million price tag, though sizable, is less than half the $400 million over four years originally approved by the House through an earlier version of the proposal, House Bill 919.

GBPI raised several objections to the new rural hospital credit over the course of legislative session, pointing out the lack of proper reporting requirements and quality controls. The final version of the proposal signed into law addresses many of those prior shortcomings. Moving forward, however, Georgia patients, doctors and hospitals will be far better served if lawmakers simply accept the substantial federal dollars available to expand the state’s Medicaid program as allowed under the national health care law. Pursuing that sensible path brings in about $3 billion a year in new federal funds and gives 500,000 Georgians access to affordable health care services.

House Bill 951 delivers two separate tax breaks. The more expensive of the two is a one-year extension of Georgia’s semi-annual sales tax holiday for back to school purchases and energy efficient appliances. This dubious tradition cost Georgia’s state treasury an estimated $42 million in the 2016 budget year and should have a similar price tag in 2017. The second, smaller aspect of HB 951 is described in the next section.

House Bill 937 renews for three years a sales tax exemption for “projects of regional significance,” a label used to describe some large corporate relocations. The subsidy originated in 2012 and was scheduled to expire this year. It costs the state treasury an estimated $21 million annually.

House Bill 1014 adds another five years to Georgia’s income tax credit for land conservation. The credit was scheduled to expire this year.

Senate Bill 379 enacts a three-year sales tax exemption for purchases made by Goodwill Industries at a total combined cost of $2.5 million. The measure was originally introduced as House Bill 924.

House Bill 763 renews a sales tax exemption for food banks. Georgia food banks are now exempt from paying sales taxes on bulk purchases of food they distribute to the hungry. HB 763 extends that exemption through 2021. The bill also extends the sunset on a related exemption that allows grocery stores and other companies to donate leftover food without remitting sales tax on the value of the donation.

House Bill 802 raises the income tax deduction married couples can claim for depositing money into Georgia Higher Education Savings Accounts to $4,000 per beneficiary from $2,000. The accounts are commonly known as 529 plans,

House Bill 922 expands the eligibility for Georgia’s Quality Jobs Tax Credit to include single-person businesses operating as limited liability companies (LLCs). The state’s fiscal experts did not provide a precise revenue loss estimate for the bill due to data constraints but noted the pool of newly eligible companies is large. The quality jobs credit as currently structured cost an estimated $35 million in the 2016 budget year.

House Bill 936 creates a new income tax credit for companies who hire recent parolees. To claim the credit, employers must meet wage and hour requirements for each qualifying worker. The parolee jobs credit was originally introduced as House Bill 828.

Likely the most consequential tax headline from Georgia’s 2016 session concerns plan lawmakers chose to reject. Georgia’s treasury and economy got a reprieve when House leaders declined to take up a pair of Senate-passed income tax bills that threatened to drain more than $2 billion from state revenue over the next five years. The two income tax proposals, House Bill 238 and Senate Resolution 756, would have erected both short- and long-term obstacles to state lawmakers’ ability to responsibly manage Georgia’s finances.

HB 238 proposed a series of immediate changes to Georgia’s personal income tax rules that carried a price of at least $1.2 billion in lost revenue over the next five years. A revenue loss of that size could critically undermine Georgia’s investments in good schools, well-maintained roads and other building blocks of a prosperous state.

SR 756 aimed to lock additional income tax reductions into Georgia’s state constitution if certain revenue targets were met. In addition to the hundreds of millions in lost revenue each year, that measure threatened Georgia’s ability to pay for the rising needs of a growing population or to borrow at the best interest rates through the state’s AAA credit rating.

The governor and House leaders deserve credit for rebuffing these proposals and protecting Georgia’s finances from reckless changes that jeopardize the state’s economy and quality of life.