The $25 billion state budget proposed by Gov. Nathan Deal for the 2018 fiscal year starting July 1, 2017 lays out his desired roadmap for Georgia to fund the people’s business over the coming year. It represents a $1.26 billion increase in total state spending over the 2017 budget approved last year, an increase of 5.3 percent. While the proposed budget represents a high water mark for Georgia in absolute dollar terms, it only returns per-capita state spending to just below pre-recession levels.

The proposed 2018 budget includes some worthwhile investments, including sizable salary raises for state troopers and child welfare workers to help with recruitment and retention, as well as program enhancements to improve child care assistance. At the same time, most of the new revenue is consumed by the naturally rising needs of a growing state. About 80 percent of the $1.3 billion in new spending maintains the status quo, including increased student enrollment, growing pension and health care costs and an overdue 2 percent cost-of-living adjustment for K-12 public school teachers.

The 2018 budget also includes money from a critical revenue source that is up for renewal. The governor’s proposal assumes lawmakers will reauthorize Georgia’s hospital provider fee, which brings in about $311 million in state funds that can leverage an additional $600 million in federal funds. If the fee is not renewed, lawmakers will face a roughly $900 million shortfall in health care spending through the Medicaid budget.

Each January the governor proposes two distinct budgets – one that lays out a new spending plan for the fiscal year starting the following July, and another that amends spending levels for the current fiscal year to reflect actual tax collections and rising spending needs over the course of year.

The governor’s amended 2017 budget increases state spending by $606 million, or 2.6 percent, more than the original 2017 budget passed last year. More than $222 million is added in the 2017 amended budget from the Mid-Year Adjustment for Education, which funds growing K-12 student enrollment. Another $384 million comes from an increase in the revenue estimate due to stronger 2016 revenue collections than originally projected.

Revenues for the remainder of the 2017 fiscal year that ends June 30 need to grow by 3 percent to meet the budget. Revenue collections by the Georgia Department of Revenue for the first six months of the fiscal year show revenue growth of 4 percent. However, December 2016 collections were only 0.7 percent more than the prior year. If the state treasury realizes another couple of months of depressed revenue growth, Georgia could run the risk of ending the 2017 fiscal year with a slight shortfall. This is an important trend for lawmakers to monitor.

The amended 2017 budget includes $606 million in new spending compared to the budget lawmakers sent to the governor’s desk last year. The size of new enhancements proposed in the amended 2017 budget, such as raises for state troopers, is somewhat unusual. After accounting for the surge of new money available in the amended 2016 budget due to a transportation tax package passed the year before, the increase in the amended 2017 spending plan is $200 million to $400 million greater than any amended budget from the past six years. It is widely accepted best practices in budgeting for additional funding in the amended budget to go towards funding mid-year budget shortfalls, emergency situations or one-time expenditures. It is a better budget practice to fund new initiatives or the expansion of existing initiatives that have an out-year budget impact at the beginning of a fiscal year. Highlights of the 2017 amended budget include:

The governor’s 2018 budget proposal contains nearly $1.3 billion in new general fund spending compared to 2017. About $1 billion is due to revenues exceeding the 2017 budget passed by lawmakers last year. Another $292 million is from savings found within the budget. Of that total, $109.8 million comes from refinancing bonds at a lower interest rate, $73.1 million from the recognition of the local portion of the Quality Basic Education Local Five Mill Share, $50.4 million from a lower state Medicaid match, $47.2 million in other savings in the Medicaid program and $11.5 million in savings from the Board of Regents.

Despite the new money, the proposed 2018 budget is slightly less than the last budget passed before the recession when adjusted for economic changes and the rising needs of a growing state. Factoring in an 8 percent increase in population and 12 percent inflation, the $2,424 per capita state spending in the 2018 budget is $71 less than the $2,495 equivalent in the 2009 budget. The 2018 budget would include about an extra $732 million if per capita spending were equal to the 2009 budget levels.

Education spending continues to dominate the state budget, accounting for 51.7 percent of Georgia’s general revenue funds. Nonetheless, the K-12 funding formula still contains a $166 million austerity cut. Medicaid is the next largest state expense, accounting for 12.2 percent of state general revenue. On a per-enrollee basis, Georgia spends the second-lowest amount on Medicaid among the states. Over 95 percent of general fund revenues are allocated to education, health care, public safety, human services, transportation and debt service, as shown in the accompanying chart.

Education and Health Care More than Two-Thirds of State Budget 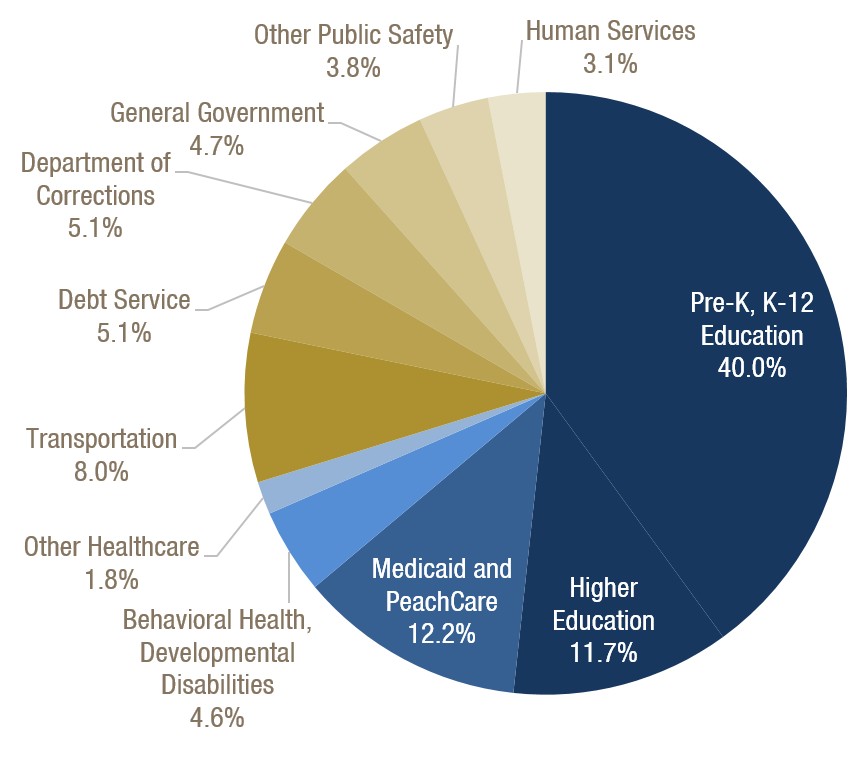 About $1.02 billion, or 80 percent, of the $1.3 billion in new spending pay for the ongoing expenses of a growing state with an increased demand for existing services and the normal business costs of state government. The following table shows the top expenses attributable to natural growth and the top new discretionary expenses.

Most of the $1.3 Billion in New Spending Attributed to Natural Growth

The 2018 budget includes $360.8 million for salary increases for teachers and state employees. Raises for K-12 teachers and state employees are essentially cost of living adjustments, which as general practice should be included in most yearly budgets. Larger raises for state troopers and child welfare workers represent more sizable, one-time increases designed to improve employee retention. Notable salary changes and budget costs are:

The 2018 budget includes authorization to sell $1.05 billion in bonds for new projects, a somewhat larger bond package than proposed in recent years. The additional debt service for these bonds is $105.8 million. The state sells bonds to pay for capital improvements, such as construction of new buildings. Bond projects include renovations and equipment in K-12 schools, university and technical college system, construction and renovations to state buildings, as well as construction and maintenance of roads and bridges. Notable bond projects in the 2018 budget include:

Georgia’s Revenue Shortfall Reserve, or rainy day fund, stands at $2 billion in January 2017, or 9.1 percent of 2016 general fund revenues. Current reserves are enough to operate the state for 31 days. The reserve fund builds at the end of each fiscal year if there is surplus state revenue. A healthy reserve cushion is needed to maintain important state functions during economic downturns that sap state revenue. Prior to the Great Recession, the reserves grew to $1.5 billion, or enough to operate the state for about 30 days. The state tapped these reserves to help balance budgets in 2008, 2009 and 2010. Even with such substantial reserves, lawmakers cut many important state programs during and after the recession. Many of the programs cut are still not restored to pre-recession funding levels.