Districts Turn to Federal Money to Fill Holes Made by the State: Results from GBPI’s 2021 School District Survey

Every year, the Georgia Budget & Policy Institute (GBPI) distributes a survey to each superintendent in the state to collect information on the effects of education funding on individual school districts, what improvements need to be made and how policymakers best support students across Georgia.

This year, school superintendents or other central office staff from 137 of Georgia’s 224 school districts and individual state public charter schools responded to the survey, representing 1.4 million public school students, or 80 percent of all students in the state. The 137 participants serve a representative sample of Georgia’s children, with districts ranging vastly in size, geography and the student populations they serve.

The following report summarizes findings from the survey, focusing on four key areas: state funding, the use of federal COVID-19 relief funds, teacher and employee retirement systems and potential future budget cuts. Insights from school leaders provide a look into the experiences of Georgia’s public schools as they begin to recover from the impacts of the COVID-19 pandemic amidst yet another year of statewide budget cuts to education.

Quotes are used throughout the report to highlight specific perspectives and common themes. Survey respondents’ names, titles and districts have been used with permission. You can view the full list survey results here.

Fiscal Year (FY) 2022 marks the second year in a row that the Georgia school funding formula has been cut by $383 million. The current budget, which began July 1, also represents the 18th year out of the past 20 that the state has failed to meet the minimum threshold for public school funding outlined in the Quality Basic Education (QBE) formula while state funding for private school vouchers has increased.[1] Over this time state leaders have continued to ignore or reject common-sense policies that would increase revenues for state services like public education and therefore end persistent cuts.[2]

Survey data reveals that COVID-19 federal relief funds will be essential in addressing the budget shortfall in FY 2022. The overwhelming majority of district leaders (93 percent) reported that they planned to use CARES I, II and/or American Rescue Plan (ARP) funds to meet the basic functions of the school that have gone unmet due to the loss of state dollars. Of the 137 districts who responded to the survey, 55 (40 percent) also plan to make use of existing budget reserves to cover the deficit. The following chart displays the breakdown of survey responses.

Note 1: Responses to the question: “The statewide austerity cut to the QBE for FY 2022 is $383 million. Which of the following actions will your district take in FY 2022 to address the budget shortfall?”

Note 2: Districts could select more than one option.

Note 3: Nine districted selected “Other”: Respondents who marked “other” had the option to provide a free response. Answers varied from not filling staffing vacancies to reducing costs on expenditures not listed in the options provided (i.e., facilities).

Use of COVID-19 Federal Relief Funds 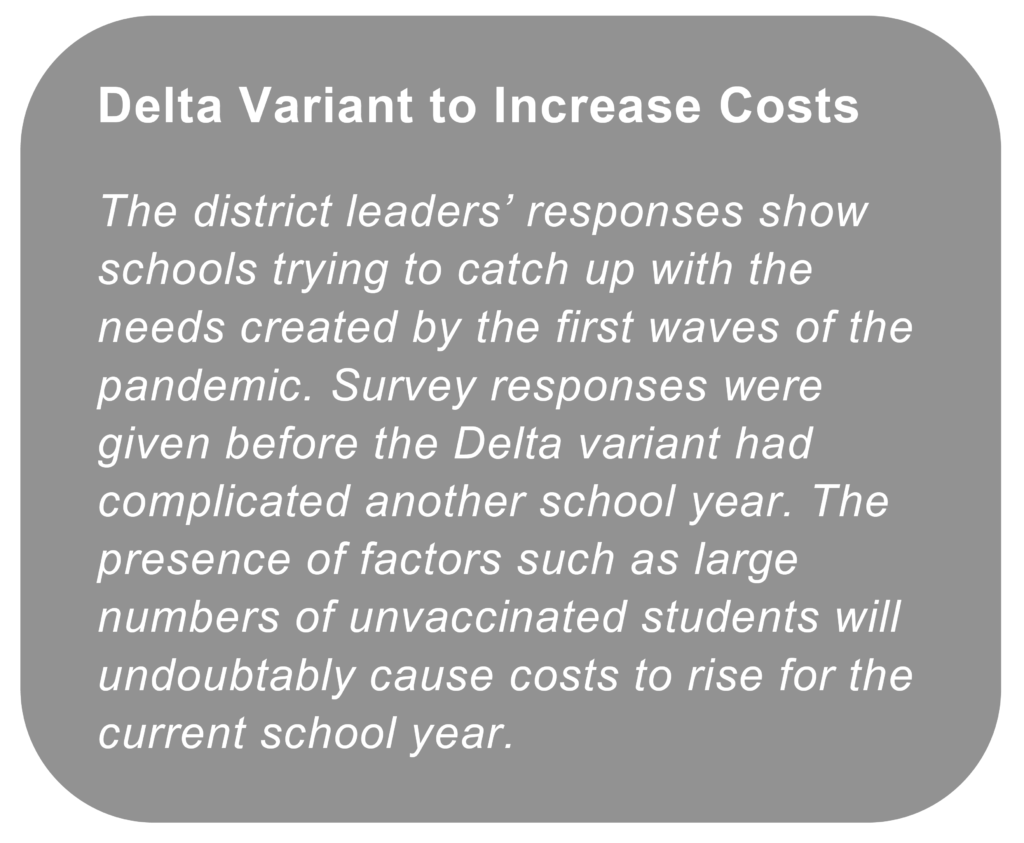 Over the past year, $5.9 billion have been allotted to Georgia’s K-12 public schools from the federal CARES Act, CARES II and the ARP. Unlike the state’s Quality Basic Education (QBE) school funding formula, federal lawmakers decided to distribute CARES I, II and ARP funds based on the ratio of students living in poverty.[3] While these funds are intended to help districts stabilize schools and offset the costs associated with continuing instruction during the COVID-19 pandemic, survey data shows that districts across Georgia have relied on federal funding to make up for statewide cuts in the education budget.

Seventy-six percent of the respondents (104 districts/charters) reported using CARES I or II money to fill budget gaps. School leaders stressed that while federal funding has been appreciated, it has been insufficient to even restore many districts to full funding, as the pandemic has given rise to increased costs and new needs amidst difficult cuts to school budgets. 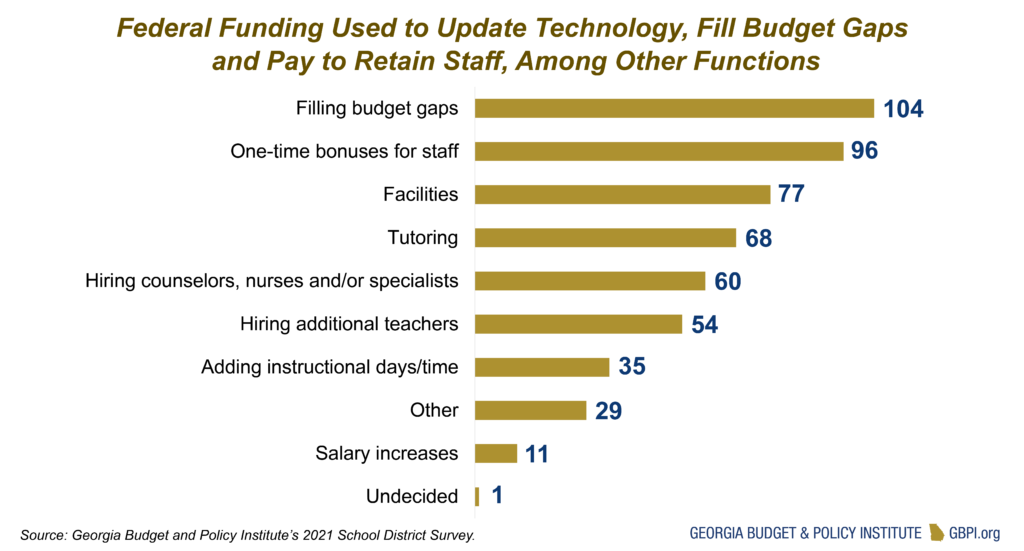 Note 1: Responses to the question: “Considering the money that has already been obligated, how has your district used the funds provided from the federal government via the CARES I and CARES II Acts?”

Note 2: Twenty-nine respondents who marked “other” had the option to provide a free response. Answers ranged from using funding for custodial work to Personal Protective Equipment (PPE) to buying school supplies for struggling families.

While federal funding has helped many districts stay afloat during the pandemic, these funds are not to be confused with adequate state funding. CARES and ARP funds are temporary, and many district leaders expressed concern over having sufficient resources to support students once that money runs out.

Reliance on federal funds to make up for budget gaps is particularly worrisome considering the challenges that schools face during successive waves of COVID-19. While the federal relief response has been significant, experts have suggested that it will not be sufficient to address the costs.[4] Perhaps it is for this reason that school leaders overwhelmingly disagreed with a comment made during General Assembly that schools might be “overfunded” due to the federal relief.

Note 1: Responses to the question: “Rate the degree to which you agree or disagree with the following statement: Due to increased federal funds, school districts are currently overfunded.”

Note 2: No districts selected “strongly agree” as their response.

If Georgia’s pattern of underfunded schools continue, districts will struggle to address the loss of instructional time and equity issues, especially once federal funding is no longer supplied. Making a commitment to fully fund public schools across the state is necessary to ensure Georgia’s full recovery from the pandemic.

Overall, school leaders view the Teachers Retirement System (TRS) as a positive for attracting and retaining educators in the state. School leaders serving over a million children in Georgia said that TRS plays a beneficial or strongly beneficial role in teacher recruitment and retention. Many of these respondents cite TRS as one of the greatest incentives school districts have to offer, and a strong draw to keep teachers in the profession. Another 15 districts report a neutral impact, speculating that young professionals entering the teaching profession might not be as concerned with retirement, and that TRS does not do much to retain employees if they are not already vested in the pension. No school leader responded that the pension has a negative or strongly negative impact. The following chart displays the breakdown of responses.

Note 1: Responses to the question: “From your perspective, how big of a role does the Teachers Retirement System play in the recruitment or retention of educators in your district?”

Note 2: No districts responded with negative views on pensions.

Compared to their perspectives on TRS, school leaders varied more widely in their thoughts about what role the Public School Employee Retirement System (PSERS) plays in recruiting or retaining non-certified employees (such as maintenance workers, cafeteria workers, bus drivers and monitors). The most common answer among districts, with 66 responses (49 percent), was that PSERS played a neutral role in recruiting and retaining school employees. However, 34 districts reported that PSERS plays a beneficial or strongly beneficial role, and another 36 reported that PSERS plays a negative or strongly negative role in recruiting or retaining school employees. From qualitative responses, while school leaders believe any retirement system is better than nothing, PSERS benefits are so minimal that it does little to attract and retain employees to the profession.

During the pandemic, public school employees have played vital roles in keeping school buildings safe and clean for Georgia’s children. Many respondents noted that PSERS offers benefits that provide insufficient retirement security even to employees who have dedicated their lives to Georgia’s schools.

Georgia’s cumulative cuts to public education over the last two decades have amounted to an alarming $10 billion, or $5,930 per student since FY 2003. These cuts come during a period that has seen continued growth in the state’s gross domestic product (GDP) and increased funding of private school vouchers using state revenues. Equalization and sparsity grants, which are awarded to low property-wealth and rural districts to support additional costs they may incur to meet the needs of their students, have been vulnerable to formula reductions and underfunding on top of the cuts to the state’s QBE funding formula. In short: choices made the last twenty years ensure that schools with the highest needs continue to suffer the greatest impacts to underfunding.[5]

During the 2021 General Assembly, lawmakers again rejected calls to increase revenue through options such as raising the state tobacco tax or closing tax loopholes. When given a choice between continuing budget cuts or raising revenues, 73 percent of district leaders, serving more than 1.1 million students statewide, supported common-sense revenue raisers. Only 4 percent of respondents, serving 1.6 percent of the students represented in the survey, supported continuing budget cuts. The remaining 23 percent had no opinion or were unsure. 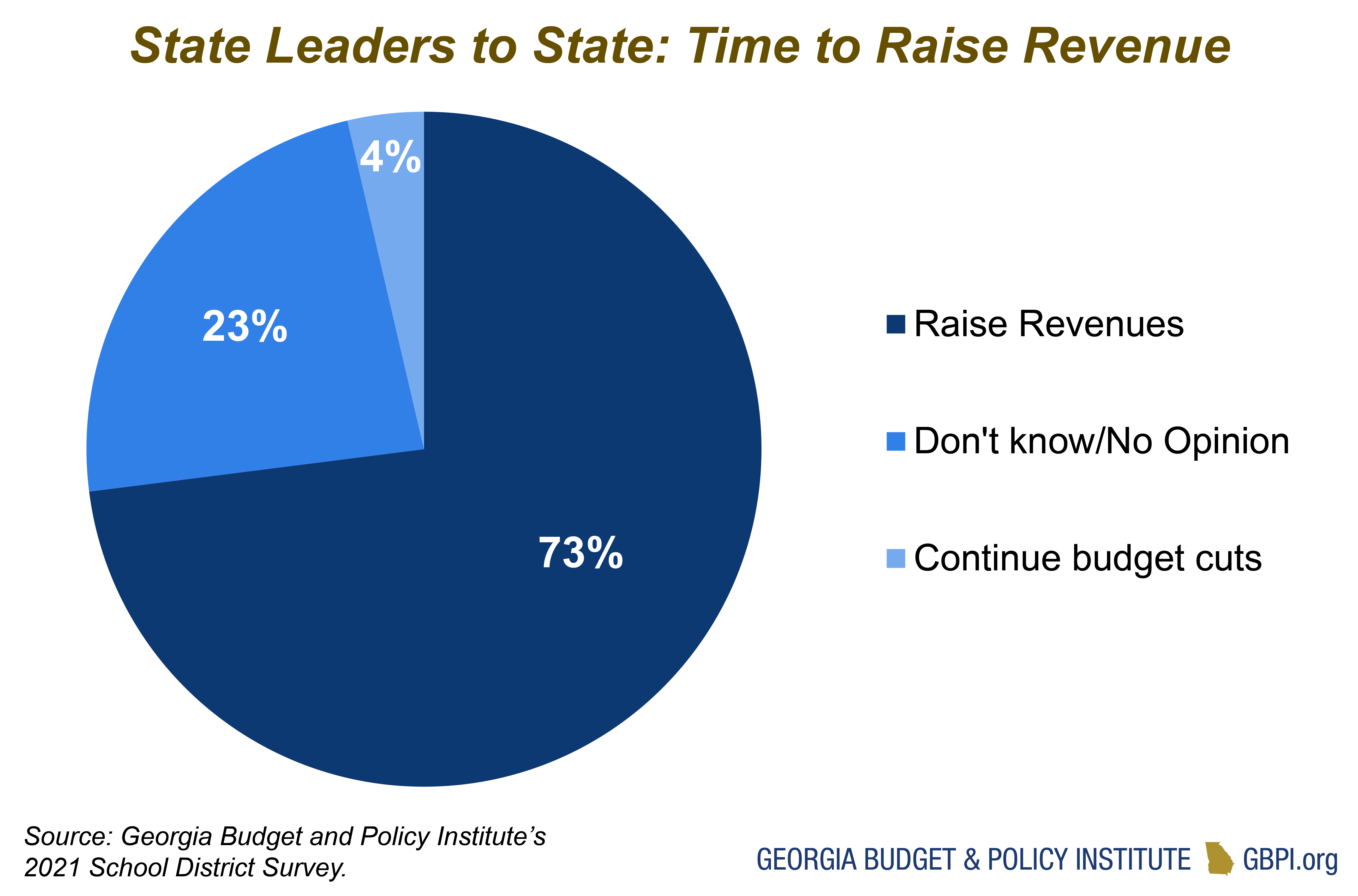 Note: Reponses to the question: “In the 2021 General Assembly, lawmakers rejected calls to increase revenue (such as raising the state tobacco tax). In the future, if given the option would you prefer that state lawmakers continue budget cuts or instead pursue options to raise revenues?”

Feedback from the survey underscores the real impact of budget cuts on public schools across Georgia. The following are three clear steps that state lawmakers can take to address concerns raised in the 2021 GBPI School District Survey:

Georgia’s schools have continued to face state budget cuts during a pandemic that has given rise to new student needs and increased disparities that have most strongly impacted Georgia’s Black, Brown and low-income communities. Federal COVID-19 relief money aimed at covering increased costs has gone towards filling budget gaps that were the state’s responsibility to fill. As Georgia looks towards recovery, addressing equity in Georgia’s schools should be one of the state’s top priorities.

The Georgia Budget & Policy Institute would like to thank the school districts who participated in this survey and were essential in collecting valuable insights on the status of Georgia’s schools. The thoughtful responses and honest feedback collected in the survey are greatly appreciated and will be used to advocate for policies that best support students across the state. District leaders, school leaders and educators have our respect and gratitude for the work they do each day to serve Georgia’s students and their continued commitment to public education.

Dr. Stephen Owens developed the survey questions. Allie Schneider, who was a Southern Education Leadership Initiative fellow placed at GBPI during the summer of 2021, distributed the survey, conducted follow up outreach, supported respondents with any questions and analyzed the results.

The survey was sent via email to every superintendent in the state. A link to the online survey was included along with a PDF version of the same survey. GBPI representatives subsequently contacted superintendents and other central office staff via phone and email to request their participation over a period of six weeks. The survey was available between June and July of 2021. Participation was voluntary. PDF submissions were manually entered by Ms. Schneider into the online survey link, and GBPI exported a spreadsheet with all survey responses.