One of GBPI’s key goals is to ensure all Georgia students get the chance to attend great public schools. Those efforts reached new levels when Claire Suggs joined the team in 2012, soon rising to senior education policy analyst.

Now Suggs is taking her expertise to a new role with the Clarke County School District, and GBPI is searching for a champion to continue her work to make sure every Georgia child gets access to a high-quality, well-funded public education.

Suggs began her tenure with GBPI at the height of austerity cuts for public schools in Georgia. Here’s what her research found over the years and how she shaped the debate on support students and school districts across the state.

Suggs developed a survey sent to all Georgia school districts to learn more about cuts in state funding, their effect on student learning and how they forced educators to make difficult decisions. This enormous undertaking gave superintendents and districts the opportunity to explain how their schools were affected and the financial strain they faced.

From the 150 school districts that responded, key findings included:

The Schoolhouse Squeeze became a yearly staple of GBPI’s K-12 coverage, documenting the recurring public school funding shortfall in the state budget. This first edition highlighted alarming trends in public school funding by Georgia lawmakers. The Schoolhouse Squeeze showed state funding per student dropped an average of 15.3 percent since 2002 and found lawmakers shortchanged school districts by $633 per student for the 2012-2013 school year, according to the state’s Quality Basic Education program. 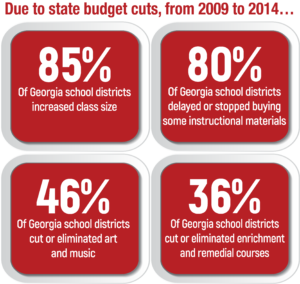 Gov. Nathan Deal proposed a new public school funding formula that aimed to maintain the existing 30-year-old formula, locked in some of 2015’s funding shortfalls and also constrained growth. The following year Suggs wrote school districts might be worse off with this new funding formula, noting it was not based on an objective, evidence-based assessment of the funding needed to provide a quality education to all of Georgia’s students.

“The state eliminated funding for health insurance for bus drivers, custodians and other school employees not certified to teach and shifted the full cost to districts. This drove up school system spending on health insurance for these workers by $400 million since the 2012 fiscal year. It’ll increase about $30 million under the proposed 2018 budget.”

The state also only covered about 15 percent of student transportation, which was a big drop from earlier years. The state covered 39 percent in 2000 and 49 percent in 1996.

Years of the beating the drum finally paid dividends. Gov. Deal ended 16 years of shortchanging the state’s K-12 schools, adding $167 million to the 2019 state budget to send school districts the full amount promised under Georgia’s funding formula for the first time since 2002.

But needs remain as Georgia still uses a 33-year-old funding formula and school districts continue to pay the majority of transportation costs.

“If we want our kids to soar in school, we need to make sure they have the tools and resources to do so,” said Suggs.

GBPI’s next senior education policy analyst can help build off that vision.