Members of the Georgia General Assembly are considering House Bill 1437 (LC 43 2318S), legislation that would fundamentally change the structure of the tax code and result in disproportionately large tax cuts for the wealthiest while hundreds of thousands of families would see tax increases or few benefits. This is due to the package’s proposed flat personal income tax rate and a mammoth price tag in excess of $1 billion per year that threatens to jeopardize funding for public education and health care.

Evaluated in its entirety, the package would direct 62 percent of approximately $1 billion in net tax cuts, or $620 million annually, to those in the top 20 percent—earning over $109,000 per year. While proponents have claimed that “95 percent of Georgians would pay less in taxes under the plan,” in reality, this analysis finds that only 62 percent of taxpayers (3 million) would benefit from a net tax cut, while 28 percent (1.4 million) would experience no change and 10 percent (506,000) would see a tax increase.[1] Furthermore, with a $1 billion expected fiscal impact that would slash state income tax revenue collections, it is likely that future tax increases or spending cuts necessary to cover the revenue lost to the state would most affect low- and middle-income Georgians.

Although certain provisions of the legislation—such as raising the standard exemption offered to all taxpayers and eliminating most itemized deductions for personal income taxes—would offer positive benefits to Georgia families if isolated, the package tilts significantly toward top earners because of the inclusion of a flat tax that increases the legislation’s cost by approximately $645 million annually. On average, for the 60 percent of Georgia families that earn less than $64,000 per year—approximately 3 million filers—the inclusion of this flat tax provision either significantly diminishes the benefits of other provisions or results in tax increases.

Also raising serious concern is the lack of transparency and public information provided to inform debate over the measure. In a hastily called meeting of the Ways and Means Committee, with no fiscal note provided to offer an official estimate of the legislation’s cost and less than one minute of debate before the full committee, members acted to advance the $1 billion package to the Rules Committee where it appears likely to soon be sent to the full House for consideration.[2] Moreover, at the time of the bill’s passage through the House Ways and Means Committee, the public version of the legislation included only 12 lines and no text referencing any of the substantial changes the bill would make to Georgia’s tax code.[3]

The largest tax cuts offered under the proposal, both in terms of dollar amount and share of income, would go to those in the top 1 percent who earn over $575,000 per year. Almost all of those in this top income bracket would benefit from an average tax cut of $4,700 per year or 0.3 percent of their annual income. For Georgians in the bottom 20 percent—those earning less than $24,000 per year—less than half of this group experience a net tax cut under the full proposal. The tax cut would average $65 per year for those that receive it. 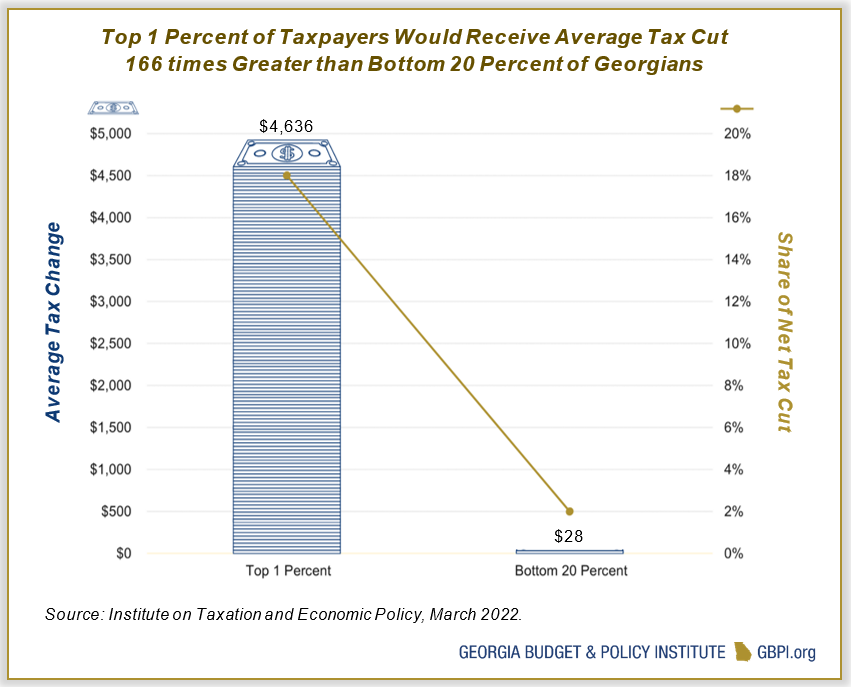 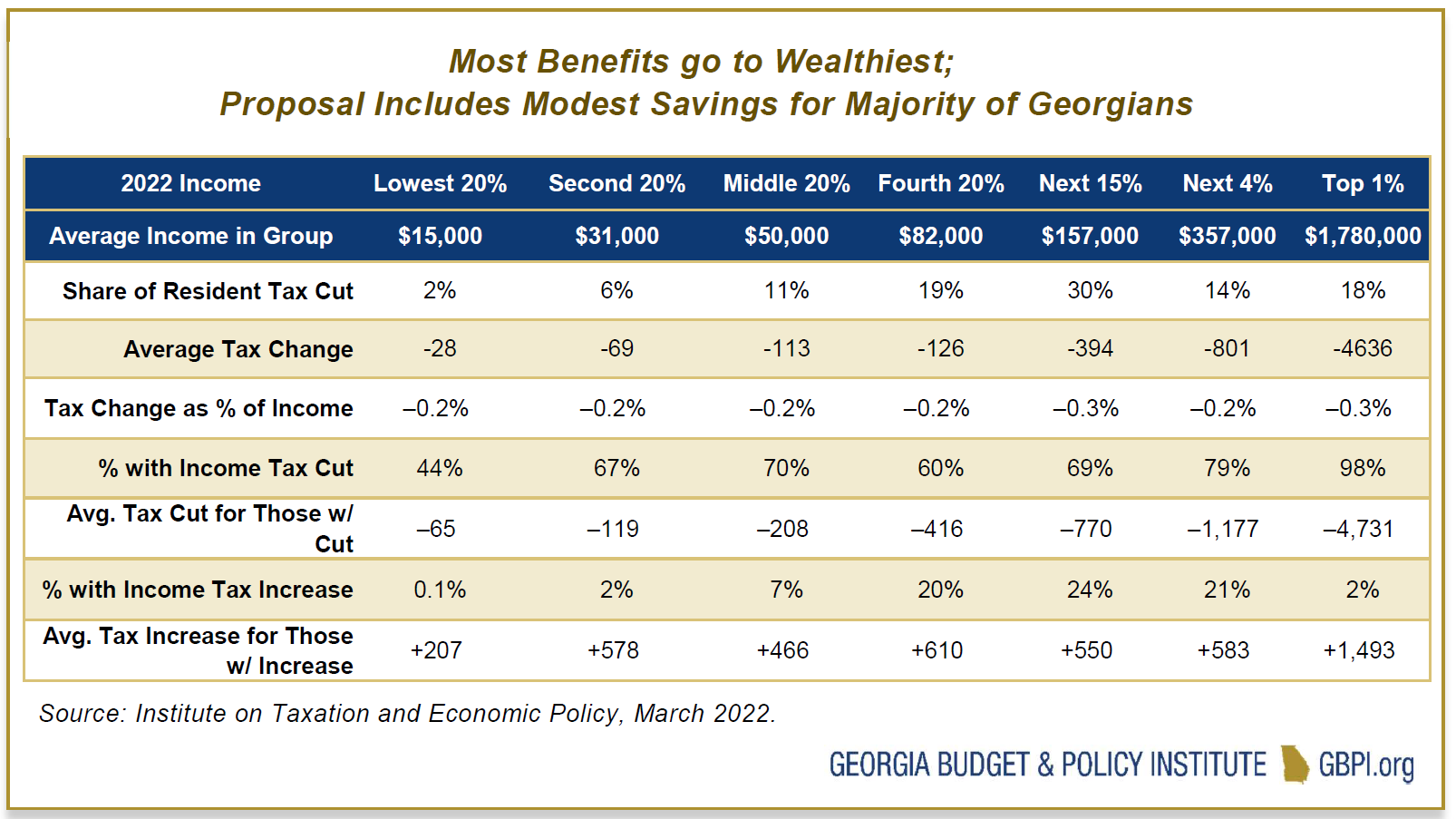 House Bill 1437 would eliminate the state’s current graduated tax structure, in which tax rates increase from 1 to 5.75 percent as income levels go up, in favor of adopting a single, flat income tax rate of 5.25 percent. As state law stands currently, all taxpayers qualify for Georgia’s personal exemption, while filers must choose between using the standard deduction or claiming individual itemized deductions. The legislation proposes replacing the state’s current standard deduction and personal exemption with a new “standard exemption” that would increase from $2,700 for single filers to $12,000 and from $7,400 to $24,000 for married couples filing jointly. Dependent exemptions would remain at $3,000. The current standard deduction of $5,400 for single filers and $7,100 for married couples filing jointly would be eliminated, leaving in its place the proposed new “standard exemption.” The legislation’s other major provisions include eliminating personal income tax itemized deductions—aside from those for charitable contributions, 529 plans and Health Savings Accounts—to help bring the proposal’s net cost down to over $1 billion annually. Filers would then be able to choose between either claiming the standard exemption or employing the remaining itemized deductions. Although state leaders should, in fact, act to simplify and broaden the base of Georgia’s income tax, combining these measures with a highly regressive flat tax primarily serves to benefit those earning the highest incomes.

Before adding the costs of the flat tax provision, the legislation’s total cost would amount to only $361 million per year and help to rebalance the tax code. Isolating all the legislation’s other tax changes except the flat tax, approximately 69 percent of tax savings would go to the bottom 80 percent, while 31 percent would go to the top 20 percent. At the same time, eliminating most itemized deductions in favor of a larger “standard exemption” would result in tax increases for most filers in the top 5 percent of taxpayers, those earning over $253,000 per year.

Overlaying the proposed flat tax on the legislation’s other provisions both diminishes the tax savings for most Georgians—those earning under $64,000 per year—while dramatically increasing the level of tax cuts extended to those making the highest incomes, particularly among those in the top 5 percent. Overall, however, even without the inclusion of flat tax, approximately 60 percent of taxpayers would experience a tax cut, only moderately less than the 62 percent under the full proposal. Considering that the flat tax carries an additional cost of $645 million, this analysis demonstrates how this plan to reshape the income tax is heavily skewed towards the highest income earners.

There are opportunities for tax reform in Georgia that would allow the state to increase revenue collections, while simultaneously reducing the amount of taxes owed by many low- to middle- income taxpayers. In recent years, Georgia has seen its income tax system become more regressive, suffering from a failure to modernize its outdated bracket structure, increasingly preferential treatment given to the highest income earners and a massive uptick in the amount of revenue lost to corporate subsidies. These changes have served to reduce potential revenue collections—thereby weakening the ability of state government to respond to the needs of its residents—while also exacerbating racial and income inequality by widening the gap between Georgia’s wealthiest and those in poverty.[5]

Georgia approved a constitutional amendment to cap its state income tax rate at a maximum of 6 percent in November of 2014. In 2018, in response to changes made to conform with provisions of the federal Tax Cuts and Jobs Act (TCJA), the state reduced its top personal income tax rate from 6 to 5.75 percent.[6] Because people of color are disproportionately represented among those in the bottom 80 percent of income earners and white Georgians make up a larger share of those in the top 20 percent than would otherwise be expected under an even distribution, reductions in the top income tax rate, like the 2018 cut, and blunt measures touted as “fair,” like this proposed flat tax, serve to exacerbate racial inequities.

The current structure of Georgia’s personal income tax remains highly outdated, whereby residents reach the highest tax rate at a relatively low level of income of $7,000 for single residents and $10,000 for married couples, rather than a true graduated income tax, where households are taxed at higher rates as income increases. If the state’s income tax brackets kept pace with inflation from 1937 to 2021, this threshold would be equivalent to nearly $130,000 for single Georgians or $186,000 for married couples. Rather than pursuing a flat tax that primarily serves to benefit the wealthiest, Georgia’s leaders should modernize the income tax to operate as a graduated tax, which would allow the state to target the greatest level of tax savings to the low- to middle-income taxpayers, while equitably benefiting all Georgians. 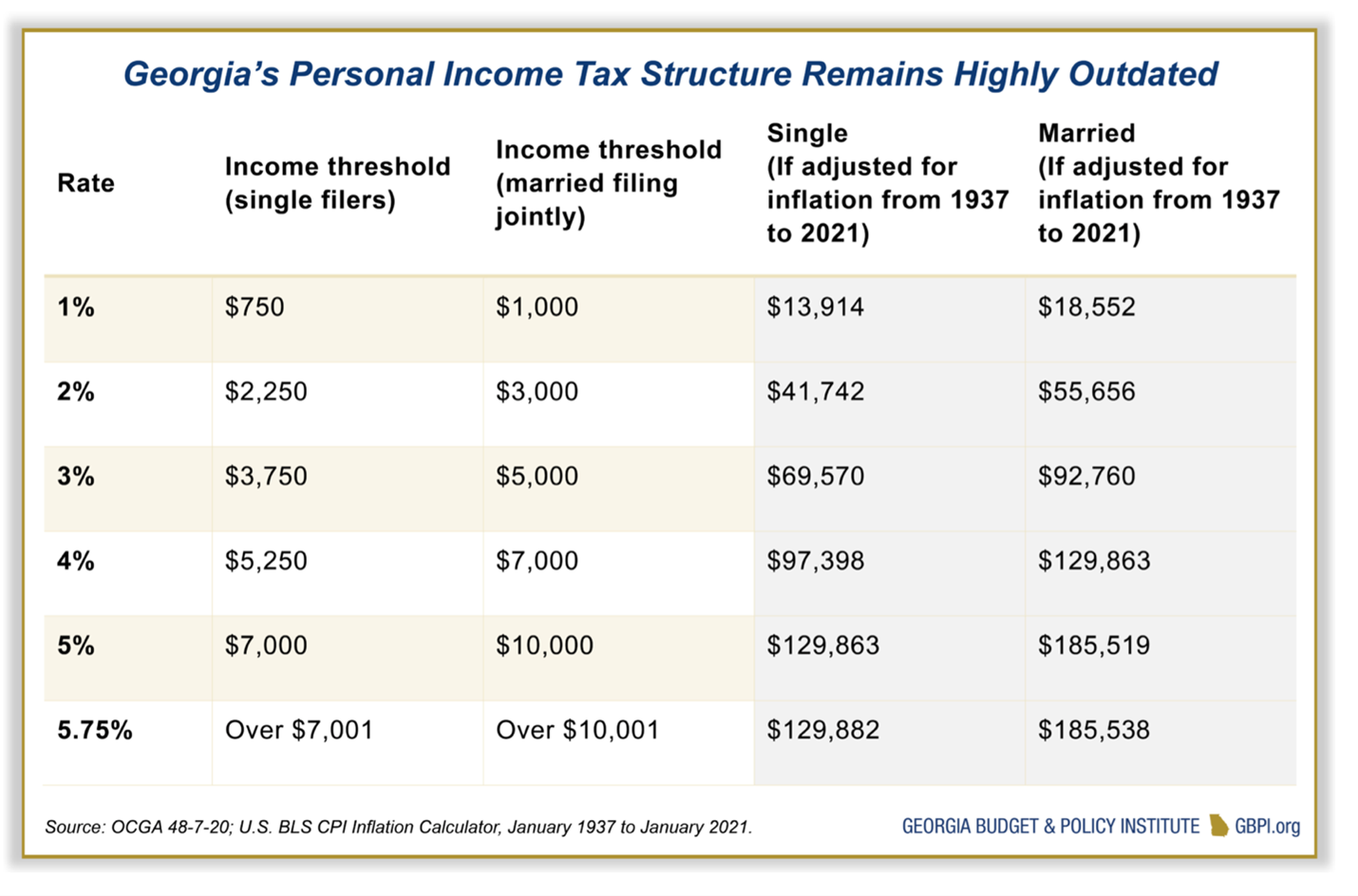 Furthermore, adopting an Earned Income Tax Credit (EITC), as 30 states across the nation and federal government have enacted, offers the greatest opportunity to put more money in the pockets of low-income families at the lowest net cost.[7] Over 3.5 million Georgians are currently eligible for the federal EITC, including 1.5 million children. Its targeted design also incentivizes recipients to stay employed and work more hours while accounting for the number of children in each family. The credit would also add balance to Georgia’s tax structure by reducing the total share of state and local taxes paid by families earning the least. 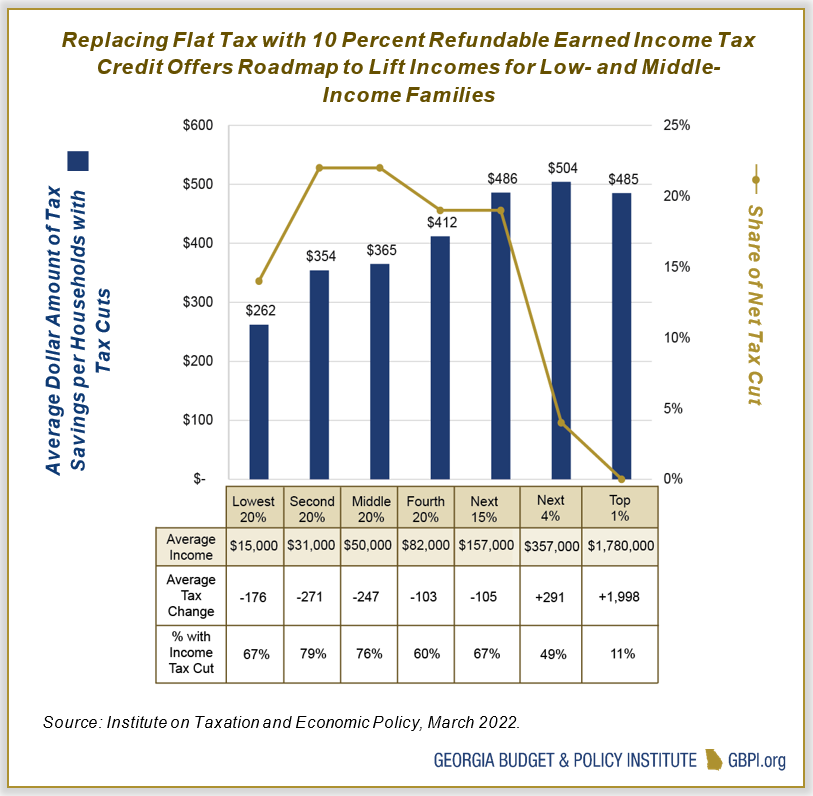 Finally, enacting legislation to weaken Georgia’s primary source of revenue, the personal income tax, by over $1 billion annually represents a dangerous threat to the state’s ability to finance its obligations over the long term. After the extreme volatility experienced during the pandemic-induced recession of 2020, many state programs and agencies are still reeling from the deep budget cuts implemented, while the state struggles to combat an all-time high turnover rate of 23 percent among employees.[8] Lawmakers would be wise to take a more cautious approach, as the state’s revenue report from February 2022 is already beginning to show signs of weakening personal income tax collections.[9] At the same time, the sizable infusion of federal funds that helped to sustain Georgia’s economy during the worst of the COVID-19 pandemic are tapering, adding further uncertainty to the sustainability of revenue collections as basic costs to maintain the status quo in state services are likely to continue to rise. Moreover, growing instability in the global economy further enhances the risk of slashing Georgia’s primary source of revenue.

Although there are some aspects of HB 1437 that would improve Georgia’s tax code—namely eliminating itemized deductions in favor of implementing a larger standard exemption—the bill is made unnecessarily costly and regressively harmful by the inclusion of a flat tax. Lawmakers must reject this measure and focus on enacting tax measures that center benefits on the majority of Georgians, rather than focusing the state’s limited resources on further enriching top income earners.

GBPI’s research on HB 1437 relies on estimates prepared by the Institute on Taxation and Economic Policy (ITEP) and GBPI’s analysis of other available information and data sources. Unless otherwise noted, the specific effects to taxpayers—in the form of net-tax effects or offsetting tax cuts and tax increases—are sourced from ITEP estimates generated in March 2022. ITEP’s analysis simulates the effects of these legislative tax changes on approximately 4.9 million Georgia tax filers to produce estimates for the average tax change across quintiles of income. For components of income that are subject to income taxes, ITEP relies on information from the Internal Revenue Service’s “Statistics of Income” publication, which provides detailed state-specific information on components of income at different income levels. For components of income that are either fully or partially tax-exempt, ITEP uses data from the Congressional Budget Office and the Current Population Survey to estimate income levels in each state.