The FY 2021 budget represents a second consecutive year of austerity after appropriators cut $159 million and over 1,000 vacant state jobs during the mid-year amendment to the FY 2020 budget. Georgia’s FY 2021 budget implements the steepest level of cuts since the worst year of the Great Recession (2009-10), including $1 billion in cuts to schools and the state Department of Education. Those cuts erased the effects of nearly a decade of slowly realized gains that allowed the state to fully fund K-12 education according to its long-established formula for just two years, 2019 and 2020.

With record levels of jobless claims and unprecedented volatility in revenue collections, state leaders responded to a sharp $2.45 billion downward revision in the state’s estimated collections by making $2.2 billion in cuts that primarily reduce funding for health care and education. Going forward, these budget cuts may accelerate the state’s downturn by cutting funding for core drivers of local economies. Lawmakers could address Georgia’s fiscal shortfall by raising revenue or eliminating existing tax breaks and loopholes to avoid further passing on the costs of deep budget cuts to local school districts, health care providers and communities across the state.

The Revenue Shortfall Reserve (RSR), Georgia’s rainy day fund, provides stability in economic downturns. The fund is like a savings account to pay expenses and maintain services when revenues decline unexpectedly. Maintaining adequate reserve money helps Georgia keep its AAA bond rating, allowing the state to borrow on favorable terms and save millions in interest. Money is not appropriated into the RSR; the balance grows at the end of each fiscal year if there is surplus state revenue (up to 15 percent of prior year revenue).

Governor Kemp and the General Assembly agreed to use $100 million from the RSR in the AFY 2020 budget for the state’s initial pandemic response. Shortly after, Congress approved funding through the CARES Act that may be used to backfill these funds, and $250 million was incorporated into the FY 2021 budget to help address the projected revenue shortfall. As a result of the pandemic, the state collected $327 million less in taxes than the state estimated for FY 2020, resulting in a $427 million deficit. These figures do not include shortfalls to the University System of Georgia caused by reductions in tuition and fees or reduced payments collected by other state agencies as a result of the pandemic. 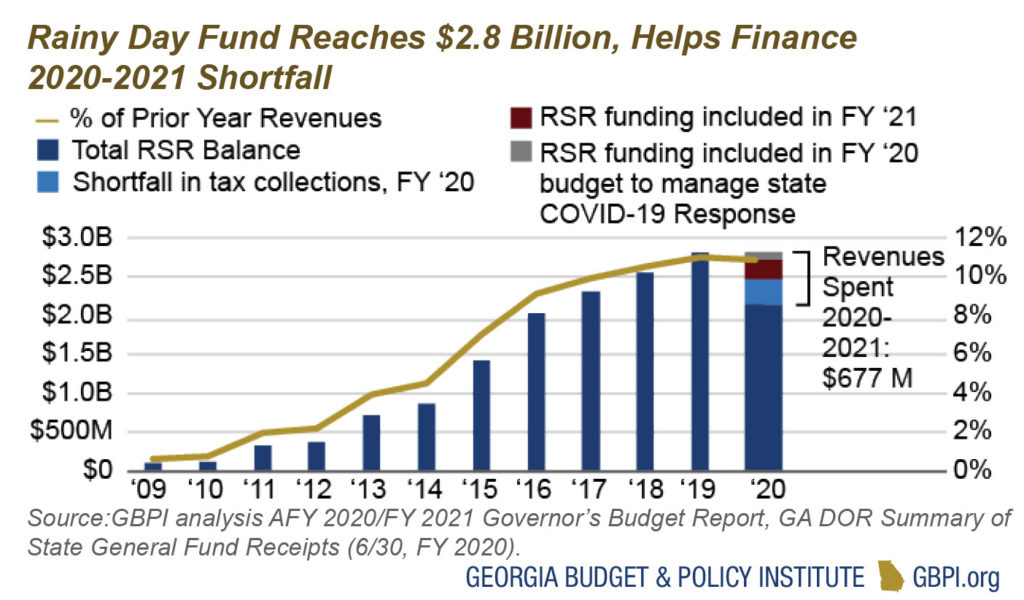 In FY 2021, the state of Georgia is poised to implement the deepest level of spending cuts since the worst year of the Great Recession (FY 2009 to 2010), reducing the state budget by $2.2 billion, or about 10 percent. After fully funding Georgia’s K-12 public schools for just two out of the past 17 years, during FY 2019-2020, schools are set to shoulder a $950 million shortfall in FY 2021. With state revenues already stretched thin in FY 2020 to meet the policy priorities of Governor Kemp and the General Assembly, the severe shortfall initiated in February 2020 by the COVID-19 pandemic upended Georgia’s positive momentum in prioritizing long-overdue pay raises for educators and improvements to the state’s Medicaid program. Below is a timeline of recent major state budget milestones.

The Georgia General Assembly approved 11 tax bills in 2020. Georgia’s assortment of tax breaks are meant to achieve policy goals such as driving economic growth or boosting family finances. However, the state continues to forego billions of dollars in state revenue each year through dozens of credits, deductions and other breaks, also known as tax expenditures. The tax breaks will cost the state an estimated $9 billion in lost revenue in the 2021 fiscal year. Even by a more conservative estimate that excludes many of the tax expenditures commonly found in other states, Georgia’s tax breaks for industry and corporations still yield an annual cost of over $5 billion.

Some tax breaks provide key protections for families, such as the sales tax exemption on groceries, while others provide credits or incentives to specific industries or special-interest groups. Several of Georgia’s largest tax breaks deliver outsized gains to select groups or industries—such as manufacturing, film or insurance—often with questionable benefit to the state or its people. Georgia lacks a formal review process to measure and compare costs and benefits of tax breaks, although proposals to improve transparency and accountability in the tax code have passed the state Senate with unanimous support in recent years. 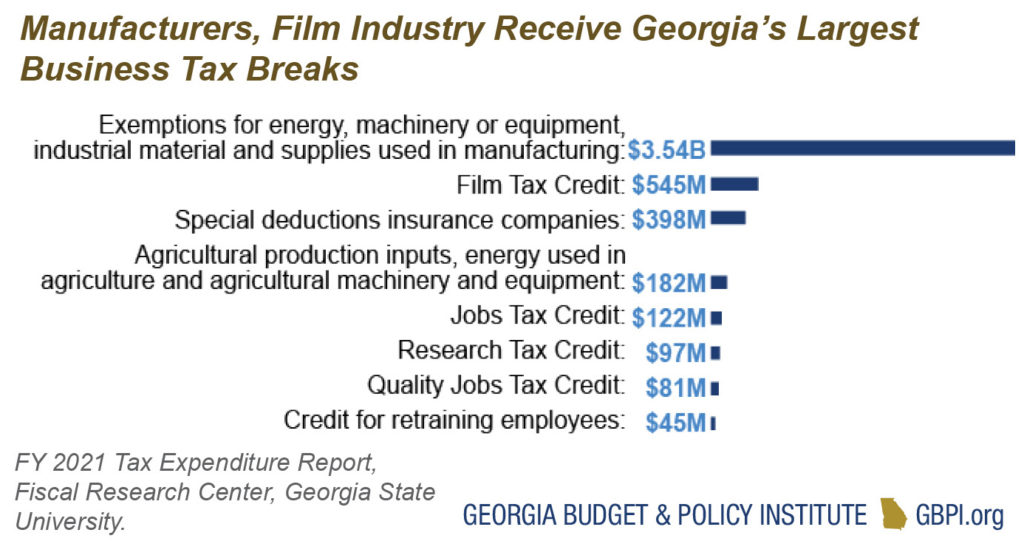